Those of you considering a stint in the Peace Corps, or just a big move overseas, take note: A recent study has documented a link between living abroad and creativity.

In the study, published in the Journal of Personality and Social Psychology, researchers William Maddux and Adam Galinsky had people participate in a variety of tasks meant to measure their creativity, including a word association task, a drawing exercise, a test of their "insight creativity"—their ability to see problems from different perspectives and find hidden solutions—and a measure of their "interpersonal creativity," meaning their ability to negotiate a deal with someone else in which both parties come away with some gain. 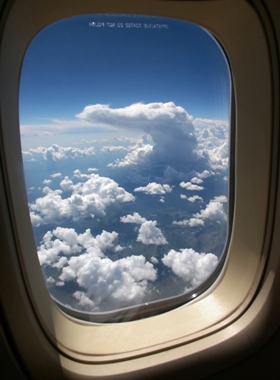 More than half of the participants were American students; the rest were students from foreign countries like Bangladesh, Mexico, and Switzerland. In addition to the creativity exercises, each person filled out a questionnaire that asked whether the person had lived and/or traveled abroad and for how long.

Maddux and Galinsky found that people who had resided in a foreign country scored significantly higher on the creativity tasks than the other participants. More specifically, though, it was the extent to which a person reported having assimilated into the new culture, more than the actual time spent living abroad, which was linked to creativity. Simply traveling abroad was not associated with creative thinking.

Maddux and Galinsky admit that it is hard to determine whether living abroad actually causes creativity. They note that many studies on creative personality types reveal that creative people share traits such as openness to experience, self-confidence, and cognitive flexibility—characteristics that may make someone want not only to travel, but to live in and adapt to foreign places. In other words, living abroad may not boost creativity; instead, it is possible that creative people are more likely than others to live abroad and assimilate into their new culture.

Still, the researchers consider that people who spend portions of their lives in a foreign country, and allow themselves to be absorbed into the host culture, may become practiced at seeing other perspectives and comparing different possible solutions to life's challenges, thus boosting their skills at creative thinking. In that light, Maddux and Galinsky argue, their study underlines the importance of having diverse experiences and of understanding cultures very different from our own, especially as the world becomes more interconnected.

"It may be that those critical months or years of turning cultural bewilderment into concrete understanding may instill not only the ability to 'think outside the box,'" they write, "but also the capacity to realize that the box is more than a simple square, more than its simple form, but also a repository of many creative possibilities."

It’s always interesting to see scientific studies that support the concept of creating diversity of thought within oneself as a valuable task. Thanks for pointing this one out.
I really liked the distinction that assimilation was more important than simply traveling and it was a nice expectation breaker on my part that you included the idea that the more creative ones may have just assimilated better. I would have probably just read this study as supporting my own beliefs otherwise.

Excellent article.  Thanks to you Nippon Mehta and Beth for it.  Until I read baths comments that was simply supporting my beliefs.  Thanks math.

Our whole family is living abroad and having the adventure of a lifetime here in India.  It has humbled me and taught me to embrace surprises, suspend expectations and to make fewer assumptions. It’s actually added greatly to my happiness to have these skills.  I can see how it contributes to creativity.  I’m just curious whether it holds true across all phases of life (childhood, adolescence, college age, adult) and if the move was not under the control of the individual (refugees/parent or spouse is assigned overseas job suddenly).

I have lived abroad for the last 25 years, in Spain, Costa Rica and China. Now that I’m old enough to settle down I’m enjoying feeling like it’s possible for me to live in the US, belonging to a very small but progressive small town. I love living in other countries. I’m an artist and writer, as well as teacher. I think it takes a creative type to enjoy being abroad, and it increases creativity by opening the mind to so many possibilities.