For more than two thousand years people have insisted that reading fiction is good for you. Aristotle claimed that poetry—he meant the epics of Homer and the tragedies of Aeschylus, Sophocles, and Euripides, which we would now call fiction—is a more serious business than history. History, he argued, tells us only what has happened, whereas fiction tells us what can happen, which can stretch our moral imaginations and give us insights into ourselves and other people. This is a strong argument for schools to continue to focus on the literary arts, not just history, science, and social studies.

But is the idea of fiction being good for you merely wishful thinking? The members of a small research group in Toronto—Maja Djikic, Raymond Mar, and I—have been working on the problem. We have turned the idea into questions. In what ways might reading fiction be good for you? If it is good for you, why would this be? And what is the psychological function of art generally? 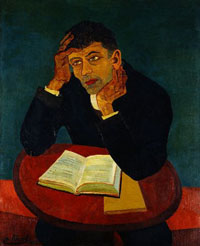 Through a series of studies, we have discovered that fiction at its best isn’t just enjoyable. It measurably enhances our abilities to empathize with other people and connect with something larger than ourselves.

People often think that a fiction is something untrue, but this is wrong. The word derives from the Latin fingere, to make. As something made, fiction is different from something discovered, as in physics, or from something that happened, as in the news. But this does not mean it is false. Fiction is about possible selves in possible worlds.

In terms of 21st-century psychology, we might best see fiction as a kind of simulation: one that runs not on computers, but on minds. Such mental simulation unfolds on two levels.

The first level involves simulating the minds of other people: imagining what they are thinking and feeling, which developmental psychologists call “theory of mind.” The theory-of-mind simulation is like a watch, which is a small model that simulates the alternation of day and night as the earth rotates. Often we can’t see sun or stars, so we refer to a little model that we can carry with us, a wristwatch, which, as it happens, is more accurate than a device like a sundial that offers a direct read-out from the heavens.

Similarly, although sometimes we know what other people are thinking and feeling because they have just told us, for the most part we have to construct a mental model of the person to know what’s going on inside their heads.

When we do this for emotions, the process is called empathy, and neuro-imaging studies suggest that when we recognize an emotion in someone else, our brains generate the same emotion. In effect, we are simulating the other person’s emotional state. Fiction, as Lisa Zunshine has emphasized in her 2006 book, Why We Read Fiction, engages our theory-of-mind faculties and gives us practice in working out what characters are thinking and feeling. Indeed some genres of fiction—for instance, the mystery novel—are entirely concerned with working out what characters are up to when they are trying to conceal it.

The second level of simulation is about what happens when people get together. Just as computer simulations of atmospheric pressure, winds, and humidity are used to generate weather forecasts, so novels can be thought of as simulations of how people react to combinations of social forces. Near the beginning of Pride and Prejudice, for example, Jane Austen describes a ball. The novel’s protagonist, Elizabeth Bennet, and her sisters are excited because they might meet potential husbands. But one of the most eligible men, Mr. Darcy, finds the proceedings provincial, and thinks they will be tedious. Austen is running a simulation in order to understand what happens in social groups when expectations clash in this kind of way. She’s offering insight into people’s lives and manners—insight that’s just as relevant to our world as to Elizabeth Bennet’s.

So if fiction is a kind of simulation of our emotional and social worlds, could it be that people who read a lot of fiction are more empathic and socially intelligent than those who don’t? This is the question that Raymond Mar, Jacob Hirsh, Jennifer dela Paz, Jordan Peterson, and I asked in a 2006 study.

First we measured whether 94 participants read predominantly fiction or non-fiction. Then, to estimate their social abilities, we used two tests. One is a measure of empathy and theory of mind: Simon Baron-Cohen’s “Mind in the Eyes” test. The participant looks at photos of people’s eyes—as if seen through a mail slot—and tries to guess the mental state of the photographed person. In the second test, the Interpersonal Perception Test, participants view 15 video clips of people interacting, then answer a question about each one—for instance, “Which of the two children, or both, or neither, are offspring of the two adults in the clip?”

But could it be that the personality characteristics of more socially intelligent people incline them to read fiction?

To help find an answer to that question, Raymond Mar used a fiction story and a non-fiction article from The New Yorker, and randomly assigned people to read one or the other. Mar gave all the readers an analytical reasoning task in a multiple choice format, derived from the LSAT exam for entrance to law school, and a social reasoning test in the same format with questions about the emotions, beliefs, and intentions of characters in social scenarios.

The result: The two sets of readers had similar analytical reasoning skills, but the short-story readers showed a stronger understanding of social situations than the essay readers.

How do we explain these results? My colleagues and I think it’s a matter of expertise. Fiction is principally about the difficulties of selves navigating the social world. Non-fiction is about, well, whatever it is about: selfish genes, or how to make Mediterranean food, or whether climate changes will harm our planet. So with fiction we tend to become more expert at empathizing and socializing. By contrast, readers of non-fiction are likely to become more expert at genetics, or cookery, or environmental studies, or whatever they spend their time reading and thinking about.

So there is evidence that reading fiction improves our social abilities. But does it affect our emotions and personality?

This was the question behind a different kind of study by Maja Djikic, Sara Zoeterman, Jordan Peterson, and myself, due to be published this year. We randomly assigned 166 people to read either a literary short story or a version of the same story rewritten in a non-fictional format. Before and after they read the text, we measured readers’ personalities using a standard personality test.

The literary story was “The Lady with the Little Dog,” by Anton Chekhov, who is generally acknowledged as the world’s greatest short story writer. It is about Dmitri Gomov, and a lady, Anna Sergueyevna, whom he sees walking with her little dog. They are both alone, on vacation at a seaside resort. They are both married to other people, but they begin an affair. At the end of their vacation they part. But their feelings for each other grow, and both are shocked to discover how much more important these feelings are than anything else in their lives. They encounter many difficulties, and overcome some of them. The story ends with this: “… their hardest and most difficult period was only just beginning.”

The version in a non-fiction format was written by Djikic as a courtroom report of divorce proceedings. It has the same characters and events, and some of the words, of Chekhov’s story. It is the same length and reading difficulty. Importantly, the readers of the non-fictional account reported that they found it just as interesting, though not as artistic, as Chekhov’s story.

We found that the personality traits of readers of Chekhov’s story changed more than those of the readers of the courtroom account. The changes in personality were not large, but they were measurable. They were different from the changes of belief spurred by a piece of writing meant to be persuasive, which tend to be all in the same direction as intended by the writer. Instead, Chekhov’s readers changed in different directions, with each change unique to the particular reader, mediated by the emotions that each individual felt while reading.

Why? We believe that as people read Chekhov’s story, they experienced empathy with the protagonists and identified with them so that each reader, in his or her own way, became a bit more like them, or decided not to think in the same ways as the characters. When we read “The Lady with the Little Dog,” we can be both ourselves and Gomov or Anna. Through stories, selfhood can expand.

My colleagues and I also believe that readers of Chekhov’s story were taken out of their usual ways of being so that they could connect with something larger than themselves, beyond themselves. This is an effect that goes beyond fiction. All art aspires to help us transcend ourselves.

So what is art, that it can enhance social abilities and transform the self?

First of all, art is something that lasts and can spread to others. So although one can imagine a lover whispering an improvised poem into her lover’s ear, for the most part a poem will travel in time and space, and last beyond the moment of its conception.

Second, art is something made by humans that is both itself and something else. Archaeologist Steven Mithen argues that the first unequivocal works of art appeared relatively recently, between 50,000 and 30,000 years ago. For instance, a wooden flute has been discovered from 43,000 years ago, and the earliest cave paintings, at Chauvet in France, are from 31,000 years ago. In this same period, ornaments such as bracelets started to appear, as did sites of human burial. In all these cases, the thing produced was both itself and something else. A piece of wood was also a flute capable of sounding notes. Charcoal on a cave wall was also a rhinoceros. A piece of bronze was also an adornment. A burial site was something constructed to show that someone was dead and also alive on some other plane.

Mithen proposes that until this period, our prehistoric ancestors were knowledgeable, but their knowledge was confined within domains. One domain was interactions in the social group, another was, say, the properties of plant foods, and so on. But at some point in the evolution of the human brain, 30,000-50,000 years ago, the domains of our cognitive structures started to interpenetrate, and metaphor was born: marks on the wall of a cave could become a rhinoceros.

This later allowed the ancient Greek lyric poet Sappho to write, “Love shakes me again, that bittersweet creature.” Love is itself, and also something else. The domains of emotion and taste interpenetrate through Sappho’s poem, in a phrase that was so memorable that the idea of love being bittersweet has lasted 2,600 years. Such crossings of domain boundaries still surprise us. It is that surprise which can help expand our understanding of ourselves and the social world.

As a writer myself, I aspire to create images and emotions in my fiction that will pass the test of time, enable my readers to transcend and be informed through the characters insights or circumstances. The information in this article supports those aspirations with the science behind why we read fiction. On those days when I wonder why I write, I will recall this article.