I hadn't realized how ridiculously adorable any animal could be until my brother brought home his basset hound puppy, Turbo (pictured below). With his big brown eyes, stubby little legs, and ears that dragged across the ground, he elicited an audible "awww!" from everyone who saw him.

Little did I realize at the time, Turbo was probably affecting those around him in another, more subtle way as well: According to a study published recently in the journal Emotion, the tenderness we feel toward things as cute as Turbo is more than just a feeling; it can actually make us more physically tender, helping us take better care of vulnerable little creatures like him. 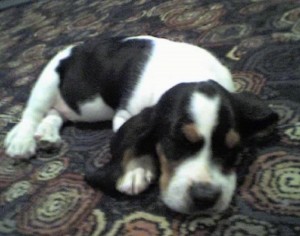 In the study, psychologists at the University of Virginia showed two different slideshows to undergraduate women at UVA. The students were randomly assigned into a "highly cute" group, which was shown images of puppies and kittens, or a "low cuteness" group, which was shown images of grown dogs and cats. Before and after the slideshow, the researchers measured the moods of the participants. Also, after the slideshow, the participants played the board game "Operation," in which players use tweezers to remove plastic body parts from a cardboard "patient" without touching the patient's body. As anyone who's ever played "Operation" knows, it's not easy—you've got to be extremely careful.

The researchers found that people in the "highly cute" group were significantly less likely to trigger the "Operation" buzzer. Also, they experienced positive emotions like happiness, tenderness, amusement, and entertainment more intensely than the other group did.

Scientists have long theorized that baby animals are so cute to persuade their parents (and other adults) to take care of them. But this study takes the evolutionary significance of cuteness one step further, suggesting that something's cuteness subconsciously causes us to take better physical care of it. "Cuteness does not just influence caregiving behaviors but also influences the ability of one to do so," write the authors. "That is, cuteness not only compels us to care for cute things but also prepares us to do so via its effects on behavioral carefulness."

Studies have also shown that when ‘we’ observe what one would consider ‘cute’, oxitocin is released into the body.

I wish everyone could just take a daily dose of oxytocin.  What a wonderful world it could be!

What about babies that aren’t “cute”?

I’d love to get the citation for the research to read the actual study.  Can you please send it to me or post it?
——-