Facing recession and stock market losses, many corporations are cutting back on their charitable donations, according to a recent article in the Wall Street Journal. But a new study suggests that may hurt them in the long run: Researchers have found that giving money away can actually make a corporation more valuable.

The study, published in the September issue of the Journal of Business Ethics and conducted by Dennis Patten of Illinois State University, examined 79 U.S. companies that contributed to disaster relief efforts following the 2004 tsunami that struck Southeast Asia. 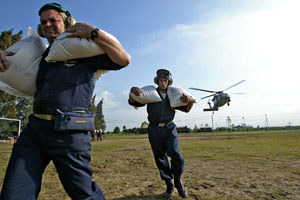 Patten honed in on two key factors: the amount donated, and the timing of the press release announcing the donation. Press release timing seemed not to have any effect on the company’s fortunes, but the size of the donation did. In the five days following a donation’s announcement, the corporations saw their stock increase by an average of one percent beyond normal projections. And the greater the donation, the more the stock increased.

But there was a notable exception. Corporations that donated exactly $1 million did not see an abnormal increase in stock values. Patten suggests that investors may have viewed a donation in that amount to be disingenuous—a transparent attempt to win good PR. As a result, the philanthropic gesture did not increase the company’s reputation, and its market value was unaffected.

But how genuine is any act of corporate philanthropy?

“I am cynical enough to believe that corporations carefully weigh the potential economic benefits of their social actions,” says Patten. “But I would hope that evidence that market participants see value in this type of philanthropy would make it easier for firms to be good social citizens.”

Even now, 3 years on from when this article was
written, we are still facing challenges from a difficult
economic environment. Charities know that making
donations has to come last in most cases, after
providing for your nearest and dearest, but this is an
encouraging story. I do not find it cynical - more
realistic- for a company to weigh up the benefit of
philanthropy. The greater the mutual benefit, the
better for everyone.