As Americans, we value our independence. We like to think we control our destinies. Self-help books rely on this mindset to boost their sales, telling us that if we have the right attitude and work hard enough, we can change our bad moods, our jobs, our earning potential, our mates.

So it may come as a shock to read David Brooks’ recent book, The Social Animal, and discover that how our lives turn out is, to a large degree, not under our conscious control. Instead, according to Brooks, we are often at the mercy of our genes, our unconscious mind, and the whims of our emotions—all of which evolved to help us navigate our social circumstances and connect us to one another. In other words, we are not the rational actors we like to think we are. 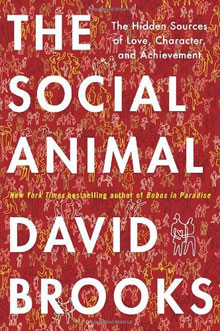 Brooks, a New York Times columnist, has made a valiant effort to weave a vast amount of statistical, social science, and neuroscience research into a single narrative. Using two fictional characters, “Erica” and “Harold,” to tell his story, Brooks shows how, when faced with different challenges at each stage of life, unconscious processes and the social forces around us guide our decisions and behaviors.

Harold comes from a highly organized, middle-class home with a loving mother—a figure who Brooks uses to highlight the importance of childhood attachment to parental figures. According to developmental psychologists, Brooks writes, parents “need to fall in tune with their kids’ needs, combining warmth and discipline. They need to establish secure emotional bonds that kids can fall back upon in the face of stress.” Giving Harold this early, positive head start in life allows him to feel confident and at ease, making connections with others easily.

In contrast, Erica’s story of growing up in a tough, impoverished neighborhood shows the devastating impact poverty can have on kids. “By the time they are four,” Brooks writes, “children raised in poor families have heard 32 million fewer words than children raised in professional families.” This often leads to lower IQ and test scores, though not necessarily lower intelligence.

While Harold cruises through school and his early adulthood, Erica has to fight for everything she wants and seems to come out ahead only through sheer determination. In one scene, she barges into a charter school admissions office demanding that they admit her without putting her through its lottery system; they do, and she is thrust into a world where respectful behavior and team-building are burned into students’ minds as much as academics.

The total immersion in a positive school culture allows Erica to learn to control her impulses and delay gratification—two skills, Brooks insists, that are key to thriving in life and can help kids overcome the devastating effects of poverty.

But Brooks isn’t concerned just with the psychological roots of long-term success. He also explores the ways that emotions and unconscious processes guide many of our everyday choices.

Drawing on research by Antonio Damasio of USC and many other neuroscientists, Brooks explains how our brains can sort through sensory information and make associations in the blink of an eye, guiding our gut reactions and lasting impressions. This happens before we form a conscious, cognitive explanation for why we like a particular flavor of ice cream, style of clothing, or even lover.

“The conscious level gives itself credit for things it really didn’t do and confabulates tales to create the illusion it controls things it really doesn’t determine,” he writes. “At every level of the process, our preconceived notions play a pivotal role in what we do.”

This is, perhaps not surprisingly, especially true when it comes to matters of the heart. Researchers have found that our judgments of others are determined within the first few seconds of encountering them. Harold, of course, comes up with his own reasons for why he falls in love with Erica—her toughness and directness—which have little to do with her hip/waist ratio or pheromones. But science suggests these cues and other unconsciously processed information play a pivotal role in a male’s attraction to a female.

This is just one of the insights The Social Animal provides into the human need for connection. For example, Brooks writes that people prefer to be in clubs rather than attend big events because intimate social contacts are key to happiness. As he reports, quoting Roy Baumeister, a social psychologist at Florida State University: “‘Whether someone has a network of good relationship or is alone in the world is a much stronger predictor of happiness than any other objective predictor.’”

Indeed, throughout the book Brooks repeatedly criticizes public policies, businesses, and institutions that fail to take into account the new scientific evidence of our social natures.

“The people studying the mind and brain are producing amazing insights about who we are,” he writes, “and yet these insights aren’t having a sufficient impact on the wider culture.” He adds that social policies “will continue to fail unless the new knowledge about our true makeup is integrated more fully into the world of public policy.”

For example, Brooks argues that schools and parents often fail their kids through misplaced priorities: “Children are coached on how to jump through a thousand scholastic hoops. Yet by far the most important decisions they will make are about whom to marry and whom to befriend, what to love and what to despise, and how to control impulses.” He makes a plea for better social-emotional education in schools in order to encourage success in life—a surprising endorsement from someone famous for his more conservative views.

Although Brooks seems genuinely committed to popularizing these new scientific insights, his tone can sometimes be, well, snarky. For example, in one scene this is how he describes a group of well-off retirees: “When sucked into the psychodynamics of a haute-bourgeois boy gang, striding around sockless in their performance sandals, they become immature versions of themselves.”

While some readers may find this funny, others may interpret the snark as sour grapes. Either way, the harsh humor sometimes cheapens his points, revealing nothing more than his own prejudices and pet peeves.

Maybe this is just an inevitable pitfall: As Brooks so eloquently argues, it’s hard to escape one’s unconscious biases and cultural influences. Perhaps one shouldn’t blame him for succumbing to them himself.

Given the uproar that followed the more recent post on Brooks’s musings on empathy, I’m surprised to find nothing here except a piece of random spam.

I must confess I didn’t realize that Brooks was trying quite so hard to be taken seriously as a social scientist. One wonders how well this all sits with his Republican brethren. All this talk of science influencing policy is frightfully reminiscent of some of Obama’s cant, and awkwardly at odds with faith-based solutions. Good lord, man, if we’re going to get all rational about things, we might not be able to base tax policy on a fantastic curve doodled on the back of Arthur Laffer’s napkin. Somebody at the club had better remind him that rationality must be confined strictly to the corporate boardroom and has absolutely no place intruding into the public realm.

As for being snarky, neither Jill nor I need feel the slightest bit guilty about indulging in much the same thing when treating of this particular tool of the corporate oligarchy. All his work is merely propaganda for the rapacious capitalism he so sycophantically serves.