The physical and psychological benefits of choral singing have become crystal clear in recent years. Less certain is precisely why joining voices in song is so powerful. Is it connection with a like-minded community? A sense of shared purpose? The thrill of creative expression?

While all of those surely play a role, new research from Ireland points to a different health-promoting factor. It finds choral singing boosts mindfulness. 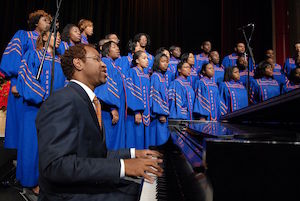 The study “supports the existence of a specific ‘choir effect,’” write psychologists Julie Lynch and Charlotte Wilson of Trinity College Dublin. Their research is published in the journal Psychology of Music.

The 83 participants (18 men and 65 women) were all members of one of two community choirs in urban Ireland. Prior to the start of a rehearsal, and again immediately after, all filled out two questionnaires designed to measure their state of mindfulness—the much-lauded ability to stay fully present in the current moment.

They assessed the degree to which a series of statements applied to them, using a scale of one to 10. These included “I am aware of my feelings without getting lost in them”; “I am finding it easy to concentrate on what I am doing”; and “I am daydreaming, worrying, or otherwise distracted.”

Later that same week, participants filled out the same questionnaires immediately before and after listening to a 30-minute-long piece of choral music—excerpts from Gabriel Fauré‘s Requiem. This allowed the researchers to determine whether the effects were specifically stimulated by singing, as opposed to simply hearing the music.

They report that listening to that soothing work did significantly increase the participants’ mindfulness level. But the group singing did so to a far greater extent. This suggests listening to music can help us focus on the present moment, but singing it does so much more effectively.

This makes intuitive sense, given that group singing requires “focused concentration,” which precludes “preoccupation with sources of worry,” the researchers write. “The call for attention to numerous details such as watching the conductor, listening to the other voices in harmony, reading the music and/or remembering the words all contribute to reaching this attentive, aware, and accepting state.”

Lynch and Wilson note that, while evidence on the positive effects of mindfulness has been mounting steadily, not everyone is willing or able to engage in quiet contemplation on a regular basis. Choral singing, they argue, could be a way to incorporate mindfulness into one’s regular routine, while also engaging in a social activity.

“It is high time that the realm of social, emotional, and psychological benefits reaped from choir singing is recognized, and thoroughly incorporated into the promotion of mental health worldwide,” they conclude. “Choirs are an extraordinary way of maintaining social and emotional well-being, and they deserve to be recognized as such.”

This story originally appeared as “Choral Singing Boosts Mindfulness” on Pacific Standard, an editorial partner site. Subscribe to the magazine in print and follow Pacific Standard on Twitter to support journalism in the public interest.