It’s time for little gabby to get out of the bath and ready for bed, but Daddy’s having trouble convincing her to cooperate. “I don’t want to!” she cries. “OK,” he says after the third try, sitting back and caving in, “you’re the boss.” A delighted little Gabby replies, “I AM the boss!” Watching it all from across the hall, “Supernanny” Jo Frost shakes her head knowingly. Daddy is not stepping up, and Gabby is taking over.

Children controlling their parents is the running theme of the reality TV series Supernanny, the most popular in a stream of pop commentary on uncivil children and powerless parents, from Malcolm in the Middle to Nanny 911. Frost, the show’s down-to-earth, distinctly British, and supremely confident “parenting consultant,” typically swoops down upon the doorstep of families at wit’s end: Almost all of them have three kids or more, very often with one parent who, for some reason, is gone most of the time, and they usually live in low-density, suburban areas where there doesn’t seem to be many people around to offer help. Unlike the teenage rebels of the 1950s and `60s—sympathetic figures who chafed against the tyranny of their elders—these kids aren’t out of control; they have taken control. 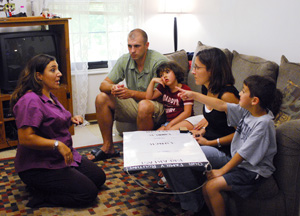 Despite Frost’s crisp, charismatic Britishness, Supernanny is a very American show. It clearly appeals to the desire for a quick fix for all that ails the family today. And in Supernanny, these ailments usually boil down to one crucial problem: Parents just don’t know how to use their power.

Enter Frost. The lion-taming tricks that she pulls out of her kit are fascinating to watch, and bear more than a little resemblance to Cesar Milan’s wonder-working on National Geographic’s The Dog Whisperer. The notorious “naughty spot,” for example, is a random place where the child is made to sit while the parents withhold all approval or communication, as a trainer would withhold a biscuit from an untrained puppy chewing on a table leg.

The upshot, for dog trainers as for human parents, is that “You are the Alpha Dog.” Someone, after all, has got to be boss. But what is ultimately most interesting about Supernanny, and where it strikes the most profound and troubling notes, is not in how it says you should fix the kids, but in what it reveals about their parents.

For a typical illustration, let’s return to Gabby and her dad. Paul Cantoni, father of three, has a hard time disciplining his daughter. In fact, he lets the three year old blatantly manipulate him. In an interview, Paul admits he can’t bring himself to impose consistent rules. “I’m more of an old softy when it comes down to letting the kids get away with things they shouldn’t be. I feel like they won’t like me as much if I play the hard boss.”

With a case like Paul, ineffective parenting is as much about the parent’s emotional needs as it is about those of the child. Indeed, child psychologists have noted that the emotional demands of parenting are changing together with the increasing time demands of work. Harvard University psychologist Dan Kindlon argues that for many families, children are valued as a type of therapy in otherwise stressful lives. “We use kids like Prozac,” Kindlon told The New York Times in a 2005 article entitled “Kids Gone Wild.”  For example, Paul Cantoni works a lot and is frequently away from home. When he does have time with his family, the last thing he wants is to alienate his children with parental discipline. He wants, instead, the instant pleasure of being liked. Like Paul, working parents who are often absent—or worn out when they are home—are a staple of the troubled families that appear on Supernanny.

And this is where Supernanny takes too narrow a view of the problems facing today’s parents. There is no mention of disruptive social factors, such as employers who ask for more and more time, rising amounts of homework, and the willingness of parents to ease up on discipline in exchange for performance in the classroom. The parents in Supernanny are isolated, overworked, and undersupported, but they get little sympathy from Frost.

Instead they get a tough but reassuring message: No matter what’s happening at work or school, children need boundaries. Asking parents to regain some degree of confidence and control over their homes is indeed one contribution, as I see it, of the Supernanny phenomenon. It’s not as good, of course, as having grandma or grandpa around, or the full participation of two parents, or affordable child care. But it’s certainly better than nothing, and more than a lot of people have.