In a country where it is often easier to find fried chicken than fresh produce and sedentary lifestyles have become the norm, eating right and staying active can be a constant struggle. Right now, many people are making New Year’s resolutions to become healthier and more fit in the upcoming year.

But new research from scientists at Brown University has demonstrated that individuals who are naturally mindful tend to have healthier hearts and a reduced risk of obesity. In the face of temptations to eat junk food and sit in front of the TV all day, they seem to have chosen a healthier path that we all could emulate. 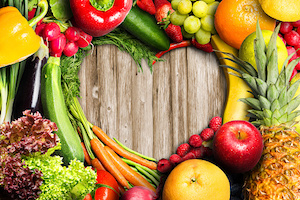 In general, mindful people are more aware of the present moment and observe their thoughts, feelings, and behaviors without judging them as good or bad. They tend to disagree with statements like “I find it difficult to stay focused on what’s happening in the present” or “I could be experiencing some emotion and not be conscious of it until some time later.”

In this new study, led by assistant professor of epidemiology Eric Loucks, the research team measured mindfulness in nearly 400 adults and assessed its relationship to their cardiovascular health, as measured by levels of smoking, body mass index (BMI), total cholesterol, fasting glucose, blood pressure, fruit and vegetable consumption, and physical activity. In order to be considered in “good cardiovascular health” by the American Heart Association, you need to be in the healthy range for four of these seven indicators.

Their results, published in the International Journal of Behavioral Medicine, indicated that highly mindful individuals were 86 percent more likely to be in good cardiovascular health than individuals low in mindfulness—even after adjusting for age, gender, and race. More specifically, mindful participants smoked less, exercised more, and displayed significantly lower BMI and fasting glucose levels than participants with less mindful dispositions.

The researchers propose that mindfulness might help people gain more clarity about their thoughts, sensations, and emotions, thereby promoting a greater sense of control and allowing them to make better health choices. For example, someone could use mindfulness to be more aware of how they feel before, during, and after physical activity in order to motivate themselves to go to the gym more. Indeed, a significant part of the link between mindfulness and cardiovascular health was attributable to mindful people feeling a greater sense of control and less depression, which is thought to lead to more heart-friendly behaviors.

And the positive associations of mindfulness don’t stop there. In a separate study, the research group also compared mindfulness with fat levels around the stomach and abdomen, which put people at risk for diabetes and heart disease no matter what their BMI. They found that less mindful participants had a pound of extra belly fat compared to their highly mindful peers, even after taking into account several other factors that might have influenced the results, such as the participants’ age, gender, race, birth weight, or childhood socioeconomic status.

But is mindfulness causing our hearts to be healthy and our stomachs to be slim? These studies can’t prove it, although researchers have reason to believe that it’s a contributing factor. For example, adults in the second study who had overcome childhood obesity and become fit were more mindful than adults who had been fit all their lives.

Loucks hypothesizes that more mindful individuals are less likely to let powerful cravings dictate their eating behaviors. For example, someone with a sweet tooth might use mindfulness to become aware of their craving for ice cream, but not act on it.

“Our brains are set up to crave fatty, salty, sugary foods for good reason—up until recently in our evolutionary history, it wasn’t so easy to come across enough calories to feed us,” he says. “With increased awareness of thoughts, sensations, and emotions around diet, we can know that our cravings are just thoughts that will eventually pass, which may help in reducing obesity.”

Loucks and his team are now working to create customized mindfulness programs in populations with high blood pressure. The good news for those who are easily distracted and have a hard time focusing on the present moment is that mindfulness can be improved through training. If you find it hard to change your diet and exercise habits directly, mindfulness might help—and it might protect your heart in the long run.