Q: Are you grateful for your partner’s household labor?
Him: Uh, yeah, I guess so.
Q: How do you express it?
Him: She just knows.
—From a focus group conducted by the authors

The division of household labor is one of the most frequent sources of conflict in romantic relationships. As couples researchers Philip and Carolyn Cowan have shown, when partners feel that the division of labor (a combination of housework and paid work) in their relationship is unfair, they are more dissatisfied with their marriage and more likely to think they would be better off divorced. However, even an equitable division of labor may not be enough to ensure that partners are satisfied with their relationship. 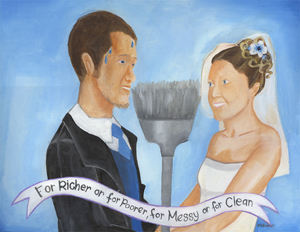 As sociologist Arlie Hochschild and others have argued, a successful relationship doesn’t just depend on how partners divide labor, but on how they each express gratitude for the labor the other one contributes.

This can be as true for single-income couples as for dual-income ones. When you perform work around the house—from cooking to laundry to checking your kids’ homework—it often feels like a burden to yourself and a gift to your partner. So if you don’t feel that your partner is grateful for your efforts, especially if you perform the lion’s share of domestic labor, that’s likely to exacerbate feelings of inequity and dissatisfaction, making a difficult situation even worse.

Fortunately, through our research we’ve started to understand how couples can identify different reasons behind their unbalanced workloads and achieve more equity in their division of labor—cultivating a greater sense of fairness, satisfaction, and gratitude in their relationships.

Why doesn’t he see it?

Her: The house is a wreck! Why didn’t you put a load of laundry in the wash, put the dishes in the dishwasher, or just take out the garbage that’s overflowing?

Him: I didn’t notice.

We have found that this conversation resonates with virtually all of our research participants—either as the complainer or the complained about. Complainers say, incredulously, “How can he (or she) not see it!?” Their partners claim earnestly that they really didn’t notice the mess and don’t understand why their partners are so upset. To make matters worse for the complainers, not only do their unaware partners fail to notice the dirty windows, piles of laundry, or overflowing garbage, they don’t even notice when someone else takes care of these problems.

Although gender is a strong predictor of who will perform household labor (conservative estimates suggest women perform two-thirds of all household tasks, not including childcare), it isn’t entirely clear why women take on this burden even in cases where they earn 50 percent or more of a family’s income.

Our research suggests one of the keys to determining who will perform a specific household task is each partner’s “response threshold,” which describes the degree of disorder that must exist before someone is sufficiently bothered to perform a task that’s not being done. Individuals with low response thresholds for a specific task are moved to perform the task earlier than those who have a higher threshold.

Interestingly, this theory is originally based on studies of social networks and division of labor among ants and bees. In her research, entomologist Jennifer Fewell found that certain bees were almost always the ones to take action once the level of honey in the hive had dropped to a particular level. In addition, she discovered that their work reduced the chance that other, higher-threshold bees would perform the job in the future.

We’ve all seen the same dynamics play out among humans. For example, if Joan’s partner Ted is disturbed when the trash in the wastebasket approaches the rim, whereas it doesn’t bother her until the trash spills onto the floor, Ted will take out the trash before Joan is moved to do so. If the difference in their disturbance levels is great enough, Joan never will empty the trash, because Ted will always take care of it before it bothers her, possibly before she ever even notices the garbage.

What’s more, if one partner does something well, that increases the chance he’ll perform that task again, just as failing at the task (or a lack of opportunity to complete it) decrease the chance he’ll get another turn. Then consider that, before long, the partner who performs a task more frequently will likely be seen as a specialist at it. Taken together, these facts explain how one partner can get stuck with a household chore.

Consider Cristina and Stephen: Cristina began doing the laundry because she had a lower threshold for piles of dirty clothes, but through repetition, she became an “expert” at laundry and, ultimately, she and Stephen came to see the task as “hers.”

Partners may have different thresholds for many (or even most) tasks. If one partner’s threshold level consistently is lower than the other’s, then that first partner will take on a greater share of the housework. He might be able to tolerate this imbalance if his partner appreciated his extra work, but too often it’s taken for granted.

Why isn’t she grateful?

Her: So that roommate that I had last year was horrible. She never thanked me for anything, she never cleaned the house—it was horrible. Yeah, I wouldn’t live with her again.

Arlie Hochschild’s theory of “the economy of gratitude” explains why under-performers often aren’t grateful for their partner’s efforts and don’t pitch in their fair share. Hochschild argues that, in relationships, individuals offer each other “gifts,” which are something extra, beyond what is expected. Therefore, if the laundry (or trash, or dishes, or all of the above) is defined as “yours,” then your partner is unlikely to feel gratitude toward you for doing it. After all, you are just doing what you are “supposed” to do, what you are “so much better” at doing. In fact, he may argue, since the undone task bothers you, you aren’t doing it for him, but for yourself. Thus, he is unlikely to feel gratitude—because he doesn’t view your efforts as a gift to him.

In terms of the division of labor, then, household partners often develop this pattern: The person with the lower threshold performs tasks before the partner is moved to do so, the tasks come to be defined as “hers,” the partner does not feel responsible for performing the task—and he does not feel grateful, because the over-performer is just doing “her” job… all of which makes him less likely to lend a hand in the future.

The economy of gratitude, then, helps to explain the fact that husbands and wives are most satisfied in their marriages when they perceive that their spouses do more than their fair share of the work. That is, when one views a partner’s household labor as a gift, over and above what is expected, then one is grateful and happy in the marriage. And, in turn, we have found that individuals who feel appreciated by their partners do indeed express less resentment over the division of labor and greater satisfaction with their relationships than do other study participants.

So how can couples cultivate gratitude, compensate for different tolerances of disorder, and thus create more equitable divisions of household labor—and greater satisfaction with their relationships?

Part of the answer comes from simply being aware of these phenomena. Once one understands that, in a sense, one’s partner truly did not “see” the dirty dishes, piles of laundry, and overflowing garbage, one tends to be less angry and can discuss the issue more calmly and in a less accusatory fashion—which, in turn, can help one’s partner be less defensive.

In general, it is best to anticipate problems before they arise. Over-performers should avoid repetitively performing a task they don’t want to “own,” especially when first living with their partner. In other words, when you first move in with your romantic partner, be careful not to cook dinner every night—or you can expect to continue cooking it every night for the rest of your relationship. Take turns in the beginning so that you can both own the task down the line.

Over-performers can also communicate to their partner when a task should be performed, rather than waiting for the partner’s threshold level to be reached—and resenting them for their lack of awareness. Also, although under-performers may not perform a task to their partner’s standards, statements of appreciation—rather than criticism for not doing it right or for doing it too late—are more likely to encourage repetition.

It also helps if under-performers understand that their partners are more disturbed by a messy house, so they need to develop strategies to respond to the differences in threshold levels, such as performing a task even before it bothers them. Each partner can take responsibility for specific tasks that they perform on a schedule, regardless of whether they are disturbed by it—for instance, by taking out the garbage every Monday and Thursday, whether or not they think it needs to be done.

Finally, domestic partners may find it helpful to write down a list of their tasks and then switch lists for a week or month to better understand their partner’s contributions. They may be surprised to discover their partners do far more than they thought. When her husband Jim was on crutches for two weeks, one of us ( Jess) discovered that she did, in fact, perform more routine household labor, but she also discovered that Jim performed many of the “dirty” tasks that she really didn’t want to do. She then began to see the division of labor as more equitable.

The gratitude issue is thornier. But understanding the role of gratitude in the division of labor can encourage over-performers to take responsibility for fewer tasks so that these tasks are not taken for granted as “his” or “hers.” Also, understanding the economy of gratitude can help under-performers recognize that they do benefit from their partner’s efforts—that this work is, in fact, a gift to them, wrapped in clean laundry and vacuumed rugs. They might not be disturbed by disorder as early as their partners, but eventually they would be, and would have to do the tasks themselves. Thus, their partners are performing tasks that, rightly, belong to both of them. And if partners practice some of the steps outlined above to create a more equitable division of labor, they’re likely to gain newfound appreciation for the work the other performs for them.

It’s unlikely that these suggestions will eliminate conflict around couples’ division of labor. But we do believe that they can help partners reduce the frequency of their conflict, increase their expressions of gratitude, and improve their overall feelings about their relationship. Most of all, they can help partners avoid the trap of taking each other for granted, and start to appreciate all the gifts—big and small—that they give to one another.

This was great information that should be given to all relationships even work colleagues, and committees

It took many years for me to figure out that helping with the dishes was a BIG thing to my wife.  She’s had a hard day too and then she cooks most every day and then she just doesn’t want to put that stuff away.

I’ve established a routine in the evening where I get things settled down after the kids are in bed and load the dishwasher and stuff.  It takes a good bit of time, but it helps her out and the next day gets off on the right foot.

Only took me 7 years to figure this out.