My friend’s teen daughter, Belen, had a big upcoming exam this past semester. Starting a week before the exam, she studied incessantly. Every possible available moment. The night before the exam, she hardly slept—she was too nervous, tossing and turning in bed, going through in her mind all the facts that she needed to know, and worrying that she missed something important. When she finally went in to take the test, she was practically paralyzed with fear, and was barely able to think clearly. 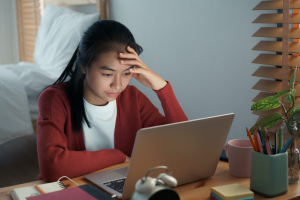 This is a really tough time for teens. I know what you’re thinking—the teen years have always been tough. But according to the U.S. Surgeon General in his advisory released in December, the pressure that teens are facing today is unprecedented. Youth mental health is in crisis. And it’s not just from the pandemic: According to the 2019 CDC Youth Risk Behavior Surveillance survey, mental health among youth did a nose-dive over the last decade, with depression and sadness increasing by 40%, and those with a suicide plan increasing by 44%.

What’s been going on?

Of course, there are many external factors that play a role. Lockdowns and school closings have kept teens isolated—at a time when the developmentally appropriate thing to do would be connecting with their peers. According to the American Psychological Association’s 2018 report on Stress in America, teens and young adults are stressed from what they hear in the news: gun violence (particularly school shootings and mass shootings), political discord, climate change and global warming, separation and deportation of immigrant families, and sexual assault and harassment.

But here I’d like to focus on something more internal: the exceedingly high standards many teens have for themselves. Whether it’s a desire for straight As, flawless skin, or athletic stardom, the quest to stand out as “the best” often drives teens to be relentlessly hard on themselves, which can lead to feelings of unworthiness and depression. Yet knowing that there is a way out—that they don’t have to relentlessly beat themselves up in order to be successful and happy—can be enormously relieving for teens.

When my daughter was in high school, she insisted that she take every AP class that was available. Both her dad and I encouraged her to be a little easier on herself, and just take the AP courses in her favorite subjects. We assured her that she’d get into a good college without taking every one. But she insisted, and gave me that classic teen eye roll, which says undeniably, “Mom, you just don’t know…”

Many teens feel like they aren’t good enough unless they are at the top of their class and excel in their sport of choice and are the best at the instrument they play and have a ton of friends and have hundreds of “likes” on whatever they post…you get the idea.

Some of this feeling of not being “good enough” comes from comparing themselves with others, or social comparison. Although it’s perfectly natural to measure yourself against others—it is rooted in our inherent need to belong and be accepted—it isn’t necessarily good for our mental health. The reason is that we become stuck in an impossible conundrum: We feel we can’t be worthy unless we’re better than those we’re comparing ourselves to and—get this—we must be better in everything. In every domain of our lives. Of course, it’s impossible for all of us to be better than everyone else in everything!

For teens, determining your value by comparing yourself with others is perpetuated in schools with grades and GPAs, which make it easy to see precisely how you measure up to your competition. I can still remember what my rank was in my high school graduating class—over 40 years ago! Even worse, social comparison is fueled by social media, where the number of “likes” you receive is a clear indicator of how popular you are. So there’s no hiding or pretending; if you get only a few “likes,” clearly you’re a social failure in the eyes of others. And it’s out there for the world to see. No wonder Franklin Roosevelt said, “Comparison is the thief of joy.”

What can we do? How can we help teens see that it’s possible to have high standards for themselves, while at the same time treating themselves kindly? That they don’t have to beat themselves up with harsh words and unrelenting self-criticism in order to excel at school and get into a good college? That they can encourage themselves, speaking to themselves kindly—the way they speak to their friends—and, in so doing, keep anxiety and depression at bay?

Ways to combat perfectionism in teens

Simply put, teens can learn how to be more self-compassionate. Self-compassion teaches us to treat ourselves with kindness and support. As defined by Kristin Neff, self-compassion is being aware that you’re struggling, understanding that difficult emotions like hurt, anger, disappointment, and loneliness are part of the human condition, and then taking an active role in supporting and comforting yourself when you’re feeling this way.

In other words, teens can encourage themselves by using the carrot and not the stick. And guess what? Research has shown that the carrot works better.

But it is possible for teens to learn to be more self-compassionate. Self-compassion can be cultivated and nurtured, and various self-compassion programs have been developed and tested. One is Mindful Self-Compassion for Teens, the teen adaptation of Chris Germer and Kristin Neff’s Mindful Self-Compassion program. Formerly called Making Friends with Yourself, the program (which I co-created) has been found to result in lower anxiety, depression, and stress and, most recently, lower risk factors for suicidal ideation among transgender teens.

In the self-compassion program, teens learn that they don’t have to treat themselves harshly in order to motivate themselves. This is quite eye-opening for teens who think that they won’t get anywhere in life if they are nice to themselves. Second, they learn about common humanity—that other teens are struggling just like them. Although this may be obvious to adults, teens often feel like they are the only ones struggling, and that their peers are confident happy campers, strolling through the teen years with nary a care.

Teens learn short meditation practices that they can do on the spot, whenever they’re feeling upset or anxious, and longer meditation practices that they can do when they have the time. Most importantly, teens learn that they have the ability within themselves to treat themselves with kindness, and that they don’t have to wait for someone else to treat them kindly. Furthermore, they don’t have to be perfect to be deserving of being treated well; they’re reminded that all of us roaming on this planet are imperfect, and being imperfect is, well, perfectly OK.

As for Belen, my friend’s daughter, she’s learning to be more self-compassionate. Of course, she still has to study—self-compassion doesn’t let you off the hook from doing your work. In fact, she’s studying just as much, but doesn’t have the same fear of failing as she once did. She knows that if she fails a test, it doesn’t mean that she’s not a worthy and valuable good person; failing doesn’t change who she is. She’ll just have to regroup, and think of what’s her best and most effective strategy going forward with the subject—or her life. And that’s self-compassionate.