In addition to all the gift-giving, holiday cheer, and peppermint lattes, December is also a time of reflection. We bid farewell to one year and welcome in the next, with a song of “Auld Lang Syne”—times gone by.

Reminiscing about the past is a year-end tradition, and it might also be a form of healing: The entire field of reminiscence therapy, for example, looks at how recalling memories can enhance our well-being. And a new study published in the journal Memory sheds light on which types of memories might be most beneficial to us.

Australian researchers recruited over 300 young adults to spend five minutes reflecting on a particular memory, from one of four categories:

After thinking about the memory—and the thoughts and feelings surrounding it—participants briefly wrote about who was involved, its outcome and significance, how they felt about themselves when reflecting on it, and what they learned from it. 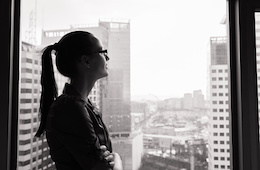 Before and after this exercise, participants rated their well-being, including their current levels of positive and negative emotions, self-esteem, optimism, self-efficacy (ability to overcome challenges), and sense of meaning in life.

While the bitterness group and the control group showed no significant changes, thinking about problem-solving and identity-related memories increased participants’ self-esteem, self-efficacy, and sense of meaning in life. Those who reflected on problem-solving reported decreased negative emotions, while those who reminisced about identity reported increased positive emotions.

“When an individual recalls a time they successfully coped with adversity, a perception of themselves as being efficacious and able to overcome challenges may be activated and strengthened,” explain David John Hallford and David Mellor of Deakin University. “The recall of self-defining events that shaped the development of one’s identity may increase perceptions of meaning and purpose in life.”

This effect wasn’t simply due to those memories being more positive, according to an analysis of participants’ written responses. Something about the themes of resilience and self-exploration was uplifting—whereas reminiscing without a specific goal, what the control group did, was not.

To activate the healing powers of reminiscence, an earlier study suggests that certain memories are better communicated than simply pondered. Researchers from the University of California Riverside found that we’ll boost our life satisfaction more by writing or talking about negative experiences, but just thinking about positive ones.

Why? Writing and talking help us process and work through difficult feelings, rather than getting caught up in rumination. Analyzing positive memories can remove the mystique; we’re better off simply reliving them in our minds.

Reminiscence often feels bittersweet; but whether it slides more toward bitterness or sweetness seems to depend on which “times gone by” we bring to mind.