Pete Docter has been involved in some of Pixar Studio's most popular and seminal animated features, including Toy Story, A Bug's Life, Cars, and Wall-E, but he is best known as the director of the Academy Award-winning Monsters, Inc. His new film, Up, will be released on May 29.

Greater Good senior editor Jeremy Adam Smith interviewed Docter — along with six other artists — for our special issue on the arts. In the issue, each artist answered one question, "Why do you make art?" but the full conversations could be quite wide-ranging. In celebration of the release of Up, we are pleased to offer the entire interview with Docter. 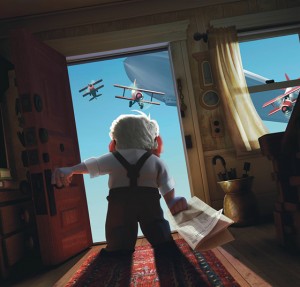 Jeremy Adam Smith: You work in a creative, collaborative medium with high financial stakes and intense commercial pressures. As a result, many people dismiss mainstream movies as commercial products, not art. In that context, are you able to still see yourself primarily as an artist, as opposed to a craftsman or an entertainer?

Pete Docter: I'm generally confused by the title "artist" and what it implies or doesn't. I see myself primarily as a craftsman, because it is the making of the thing and bringing it to the highest level of quality that scratches the itch for me. However I am also very sensitive to what I'm working on; if it doesn't speak to me, I have trouble getting going on it.

What I really look for in a project is something that resonates with life as I see it and speaks to our experiences as humans. That probably sounds pretty highfalutin' coming from someone who makes cartoons, but I think all the directors at Pixar feel the same way. We want to entertain people, not only in the vacuous, escapist sense (though to be sure there's a lot of that in our movies too), but in a way that resonates with the audience as being truthful about life — some deeper emotional experience that they recognize in their own existence. On the surface our films are about toys, monsters, fish, or robots; at a foundational level they're about very universal things: our own struggles with mortality, loss, and defining who we are in the world.

Animation as a medium can definitely be crassly commercial, but it can also be beautiful art. Watch Frédéric Back's short film The Man Who Planted Trees and tell me that's not art. I will say it's sort of deadly to think too much about creating "Art" when you're making these movies. That sort of thinking tends to lead to big-headed pontificating (like I'm doing now). The right thing to do is just try to tell a good story.

I don't think about the financial aspect of our movies as I'm making them. I don't worry about how we're going to sell it, or market it, or what products and promotional partnership opportunities may be there. Someone else gets to deal with all that. I do worry about what the audience will feel as a result of the story I'm telling and how I'm telling it. My job — and passion — is to make a film that people will enjoy and relate to on some emotional level.

JAS: Why do you make art?

PD: Primarily because I enjoy the process. It's fun making things. And I'm sure there is also that universal desire to connect with other people in some way, to tell them about myself or my experiences. Of course, at Pixar we're not in the business of creating "personal films." Yet without some personal connection or statement, I believe the film will feel hollow. So it's sort of a balance there.

JAS: How did you settle on animation as the medium of your art? What does it give its audience that other media cannot?

PD: Animation is an absolutely amazing medium. It's completely 100% artificial, yet when done well is almost more real than real life. On one level we know it's just a bunch of drawings — or clay figures, or computer generated images — and yet people believe in what they're seeing to the point of being brought to tears over Dumbo separated from his mom, or the Seven Dwarves thinking Snow White is dead. To me it shows how strongly imagination works, that people can lose themselves in an artificially created world. And it's a real rush to create something like that, when it works.

In my current role as a film director, I am less an animator and more a storyteller. I don't actually get to animate much at all these days. My job is to tell a story in an engaging way, utilizing the amazing and varied talents of the artists and technicians at Pixar.

A lot of people wonder what a director actually does. How do you direct an animated film? There are some 300 people working on these movies, and my job is to make sure they're each doing their part in a way that contributes to the overall statement. It's sort of like being a conductor of a symphony, only it's as if each instrument were recorded individually, months apart from each other. The director's job is to make sure each musician is playing his individual part in a way that will all come together as a balanced and seamless whole.

JAS: In the Spring 2009 issue of Greater Good we devote special attention to the social and emotional impact of the arts. What benefits do you see your films as bringing to children and adults?

PD: I'm a big believer in moderation when it comes to entertainment. If you're watching hours of television every day, to me that can be just numbing. But when that special film comes along, at the right time in your life, it can be completely transformative.

I don't like to think of our films as being educational, or imparting morality on kids. We don't design them to lecture people. To me, when you see a really great film, it works because something about it resonates. That's our goal: to find something real the audience will recognize and bring it to the screen. Films can be like a reduction sauce; they're real life with the volume turned up. So they can shine a spotlight on aspects of your own life that are normally dimly lit.

As filmmakers, we're pretty much cave men sitting around the camp fire telling stories, only we use millions of dollars of technology to do it. By telling stories, we connect with each other. We talk about ourselves, our feelings, and what it is to be human.

Or we just make cartoons. Either way we try to have a good time, and we hope the audience does too.