A number of recent books have been concerned with the importance and prevalence of human goodness and empathy. These include Dacher Keltner’s Born To be Good, Jeremy Rifkin’s The Empathic Civilization, Frans de Waal’s The Age of Empathy, and The Compassionate Instinct, edited by the editors of Greater Good. 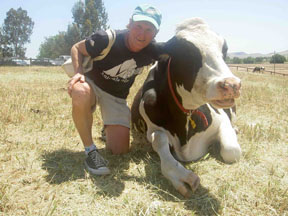 Marc and Bessie, a rescued dairy cow at Farm Sanctuary.

Given my own background in animal behavior and cognitive ethology, I’ve written about goodness and empathy and its relationship to fairness and moral behavior from the nonhuman animal’s point of view in The Emotional Lives of Animals, The Animal Manifesto: Six Reasons For Expanding Our Compassion Footprint, and, with Jessica Pierce, Wild Justice: The Moral Lives of Animals. These books show that the competitive “nature red in tooth and claw” paradigm doesn’t accurately reflect the way animals interact, and that we can clearly see the evolutionary roots of our own empathic behavior in other animals. Charles Darwin also believed that animals, like humans, could be emotional, empathic, and moral beings. He suggested that human morality is continuous with similar social behavior in other animals.

Many animals are far more empathic and fair than many people realize. Even mice are empathic beings and capuchin monkeys and domestic dogs expect to be treated fairly. Individuals who are short-changed during a bartering transaction by being offered a less preferred treat refuse to cooperate with researchers. They display “inequity aversion.”

Many animals have very rich social lives; cooperation and caring have shaped the course of evolution every bit as much as competition and ruthlessness have. Individuals form intricate social networks and have a large repertoire of behavior patterns that help them get along with one another and maintain close and generally peaceful relationships. Robert Sussman and his colleagues Paul Garber and Jim Cheverud reported in 2005 in The American Journal of Physical Anthropology (128:84–97) that for many nonhuman primates, more than 90 percent of their social interactions involve affiliation or cooperation rather than competition or conflict. What’s more, social animals live in groups structured by rules of engagement—there are “right” and “wrong” ways of behaving, depending on the situation.

While we all recognize rules of right and wrong behavior in our own human societies, we’re not accustomed to looking for them among animals. But they’re there, as are the “good” prosocial behaviors and emotions that underlie and help maintain those rules. Such behaviors include fairness, empathy, forgiveness, trust, altruism, social tolerance, integrity, and reciprocity; these are not merely byproducts of conflict but extremely important in their own right.

My own long-term research shows that one of the clearest places to see specific social rules incorporating fairness and empathy is in animal play. By studying the details of social play in domestic dogs and wild canids (members of the dog family), we may learn a lot about the evolution of human empathy and fairness—and discover behaviors that hint at the roots of human morality.

Although play is fun, it’s also serious business. When canids and other animals play, they do so with actions like vigorous biting, mounting, and body slamming that could be easily misinterpreted, so it’s important for them to state clearly what they want and expect. Animals at play are constantly working to understand and follow the rules, and to communicate their intentions to play fairly. They fine-tune their behavior on the run, carefully monitoring the behavior of their play partners and paying close attention to infractions of the agreed-upon rules. Four basic aspects of fair play in animals are: Ask first, be honest, follow the rules, and admit you’re wrong. When the rules of play are violated, and when fairness breaks down, so does play. Animals who don’t play fair often find themselves excluded from their group and suffer high mortality. Thus, fair play and reproductive fitness may be highly correlated. Violating social norms established during play is not good for perpetuating one’s genes.

Fair play, involving empathy, can be understood as an evolved adaptation that allows individuals to form and maintain social bonds. Basic rules of fairness guide social play, and similar rules are the foundation for fairness among adults. This moral intelligence, so evident in both wild canids and in domesticated dogs, probably closely resembles that of our early human ancestors. It may have been just this sense of fairness that allowed human societies to flourish and spread globally.

We need to use what we know about animals to inform how we treat them. Animals must be factored into our raising global consciousness in a troubled and wounded world. The central theme of The Animals’ Manifesto is that humans and animals are basically good, empathic, compassionate, and fair beings, and that we can all do more to act on behalf of animals. In this book, I develop the notion of the “compassion footprint.” I show how we can expand our compassion footprint as we make every attempt to take better care of the animal beings with whom we share our planet. We can heal the broken lives of animals by showing more humility and ridding ourselves of human exceptionalism—the idea that we’re better, higher, or superior than other animals, and that’s it’s okay for us to do whatever we like to animals. Empathy and fairness allow us to do what needs to be done to heal the conflicts we have with other animals and amongst ourselves. Research on animal morality is blossoming, and if we can break free of theoretical prejudices, we may come to better understand ourselves and the other animals with whom we share this planet.

We can easily make positive changes as an empathic collective that will help other animals and us. A great way to begin is to set an example for children, something I do in my work with Jane Goodall’s Roots & Shoots program and in my children’s book Animals at Play: Rules Of the Game. These are just some of the ways toward a much-needed paradigm shift in how we view other animals and ourselves—a shift that can help us realize our dreams for a more compassionate, empathic, fair, and peaceful planet, where social justice will prevail.

Empathy is only a proxy for kindness, which, as Professor Colin McGinn explains in “Moral Literacy: Or How To Do The Right Thing”, is itself only one of a shortlist of four basic virtues: (1) kindness, (2) honesty, (3) justice, and (4) independence.  Some claim that these virtues are more important than reading and writing, but the ability to arrive at informed and thoughtful moral judgments is rarely considered as a separate topic in school.

Further, these virtues support one another, so cross-pollination is critical.  Kindness requires justice, without which it would simply be meekness.  Justice needs kindness, or mercy, so that it won’t be harsh and unforgiving.  Honesty must be tempered with kindness and regulated by justice, and so on.  When these four virtues are present in sufficient degree and work together, people are said to be “good”.

The fourth basic virtue—independence—is not normally given sufficient consideration and is quite rare in practice.  Independence is the ability to make up one’s own mind, and not be swayed by social conformity or threat.  This doesn’t mean simply disagreeing with authority figures, but using the evidence and the facts to arrive at informed and socially just decisions.  A lack of independence can lead one toward prejudice, narrow-mindedness, ignorance, and fear.  Historically, humans have not excelled here, as evidenced in the past by the widespread willingness to exploit women, people of other ethnicities, and children, and our species’ current willingness to exploit the poor, the LBGT community, and nonhuman animals.  This latter case is a great case in point for self-examination of our independence of thought.  Parents tell their children to be kind to animals, but in most non-farm families, the most frequent interactions with animals occur when family members sit down to eat them at mealtime, after the animals themselves have led the most cruel and grisly lives imaginable.

Professor Bekoff is right in that we must set the example for our children.  When your child’s teacher orchestrates a chicken hatching project or zoo visit, suggest alternatives (e.g., http://www.upc-online.org/hatching/alternatives.html).  Consider “Roots and Shoots” instead of the standard organized clubs that would have your child fishing for “badges”, and read “Animals at Play” for an exercise in perspective taking.

Excellent article, and great comments from Mark.  There’s also a wonderful article in the National Journal, May 22, titled ‘Animal Rights on the March’.
http://www.nationaljournal.com/njmagazine/

Dr. Bekoff is high on my list of favorite humans.

I would love nothing more than to actually meet him
and maybe just hang out for the day, discussing a
very mutual passion shared.
He has made a difference. I hope he knows that.

There is some language in this article that would send the Bible bashers off the deep end, such as “ridding ourselves of human exceptionalism” and “nonhuman primates.”

As presidential politics starts to ramp up, we see just how powerful the religious fundamentalists are in this country. Couple those moronic misconceptions with the obscene profit-motive of the agribusiness corporations, and you have a veritable Holocaust for our poor, defenseless animals. And I use that loaded word quite deliberately, for we have appointed ourselves the Master Race.

On a slightly lighter note, how many nature documentaries have you seen on television that highlight the cooperative, emotional, and, yes, moral behavior of animals? Not too many, I’d wager. The emphasis is always on conflict over limited food supplies and mating opportunities, as if we are hell-bent on finding in nature the competitive struggle of our own society.

Dr. Bekoff is to be congratulated for doing what scientists are supposed to do: seeing the world as it really is, not as we think it is. But good luck getting the rest of the country to follow suit. They’re still begging an invisible friend to let them into heaven. Have they ever asked themselves why a truly beneficent creator want to reward any human who mistreated his creation so badly?

Sorry about the mistake in the last sentence, above. Obviously, I missed the word “would.” So much for human exceptionalism.

I didn’t even notice the mistake because I was so impressed with the overall comment!

I do notice more and more shows and articles about the compassion and intelligence of animals, so am quite hopeful actually.