When Zayne Logsdon struggled with eyesight problems five years ago, doctors told his mother Lisa that they could help—but it would cost her.

Special eyeglasses for then-four-year-old Zayne, whose sensory problems were brought on by autism, would set her back more than $500. Logsdon despaired. Her husband’s own health trouble recently had forced him out of work, and she was a full-time graduate student earning her teaching credentials. The Kentucky couple could not afford the cost of helping their son make sense of the world around him.

Logsdon contacted her local Lions Club chapter and several other organizations, but none offered assistance. The family did not qualify for government aid. A desperate Logsdon searched the Internet for a solution, and she stumbled upon Modest Needs. The nonprofit foundation, then based in Tennessee, gives grants to working people to help them cover unexpected one-time expenses—medical bills, car repairs, large heating bills—that they otherwise could not afford. Thinking her tab hardly modest, Logsdon sent Modest Needs a request for just $50. Before long she had a reply from Modest Needs’ founder and president, Keith Taylor: His organization would pay the entire $557 cost of the special lenses. 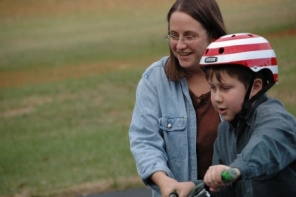 Today, Zayne is a lively nine-year-old who loves music and excels in math; this past May, doctors even said he had outgrown his need for his glasses. He spends most of his school day in a mainstream third-grade classroom, progress that would not have been possible without those glasses, Logsdon said. Modest Needs helped her family with a budget crisis that, while crushing, was hardly unique. “The truth of the matter is it could happen to anyone,” Logsdon said. With Modest Needs, she said, a recipient “could be your neighbor, your best friend, someone in your family. I can really appreciate that.”

Logsdon was one of the earliest recipients of Modest Needs. Since it began in 2002, the organization has evolved from a part-time project into a full-time operation, now based in New York City, that funnels 100 percent of its donations from individual donors to carefully screened recipients. At a time when soaring health care and fuel costs have made it harder for middle- and working-class families to make ends meet, Modest Needs offers a rare and well-targeted form of relief. “It’s very humbling to look at the true scope of what the need is,” Taylor said. He didn’t realize how daunting his mission would be when he started out. “Had I known that, I might’ve been deterred, so maybe it’s good I didn’t.”

The organization’s goals are twofold: to prevent recipients from falling into poverty, and to open donors’ eyes to their power to change the world. To achieve these goals, it relies on a deceptively simple model. Donors can give any amount they choose to Modest Needs, mainly through its website. Some donors give once; others give on a weekly or monthly basis. Each month, anyone who donated during that month can go online to review funding applications and rank them on a scale of one through nine. Every donor’s vote gets equal weight, no matter how much he or she gave. The funds raised over the previous month are dispersed to the highest-ranking applicants first, then on down the list until there’s no money left. The average grant size is $355 and the maximum, with very few exceptions, is $1,000. Many recipients go on to become donors; at least one donor became a recipient.

Those on both sides of the funding equation praise Modest Needs’ un-bureaucratic approach. The organization can answer requests in a matter of days, sending urgent aid to prevent, for example, a family’s heat from being turned off. And it pays recipients’ bills directly, instead of sending cash, so there’s never a question of how the funds are used. This streamlined giving process allows donors to touch lives directly and with measurable results. “There are very few layers in the organization,” said Stella Kramer, a regular Modest Needs donor who lives in New York City. “It’s so direct and it makes so much sense.”

For many of Modest Needs’ recipients, a few hundred dollars can make the difference in retaining their jobs, or keeping their homes, during financial emergencies. Melanie Carter had been a Modest Needs donor before she found herself struggling to make a mortgage payment. Eye surgery had kept her out of work for four months, and short-term disability benefits were slow to arrive, so the Tennessee woman turned to Modest Needs in the interim. “It saved my house,” she said. Soon after she got back on her feet, Carter resumed her regular donations to Modest Needs. Taylor likes telling the story of a Texas woman who requested help with a car payment so she could commute to work. Only after she received the grant did the woman reveal that her son was born without part of an arm, and that she also needed the car to drive him to the hospital to pick up a free prosthesis he had been promised.

If they can’t turn to friends or family, working people in the United States have few options when faced with unexpected expenses like these. Most U.S. charities are umbrella organizations that collect large amounts of money to disburse to other nonprofits, not to individuals. And public assistance is only for the destitute. In New York City, for example, a family of four must have an income below $18,330 before it can qualify for some public assistance. “We make people get very poor before we give them benefits,” said Beth Weitzman, a professor of health and public policy at New York University’s Robert F. Wagner Graduate School of Public Service. Modest Needs investigates each grant application to make sure it results from an emergency and not, say, poor budgeting. According to Taylor’s calculations, the foundation’s average grant of $355 is worth a combined $1,837 to the recipient and the state welfare system for every month that it keeps the recipient working and off public assistance.

Taylor conceived of Modest Needs as a side project when he worked as a tenure-track literature professor at Middle Tennessee State University, a job that he loved. He originally envisioned a one-man charity funded with 10 percent of his salary, or about $300 per month, as a way to honor those who helped him through graduate school. In April of 2002, a friend posted Taylor’s proposal for Modest Needs on the popular community weblog Metafilter.com. He received 700 emails in response, most of them from people wanting to donate. The media picked up on the story, and Taylor found himself on the Today show just two weeks later. He took his project full time and moved to New York City in 2003, and now oversees a full-time staff of three.

A boyish 39, Taylor clearly relishes his role as philanthropic matchmaker. Sitting at his tidy desk in Modest Needs’ basement office in a brownstone on Manhattan’s East Side—a Michigan donor pays the rent—he used phrases like “knock your socks off” when describing Modest Needs’ rapid growth. “We built this organization on five dollars a head,” he said. Modest Needs’ motto— “Small Change. A World of Difference.”—also speaks to the power of the small monthly donations that sustain it.

While Taylor has no background in nonprofit administration, he has created a case study in fundraising best practices. Through the online voting process, donors take an active role setting Modest Needs’ funding priorities. Taylor encourages recipients to write thank-you testimonials, which are also posted on the organization’s website. Research shows that donors like to see this kind of return on their investment. “We know that if you’re able to point to a specific impact, donors will be a lot more loyal,” said Adrian Sargeant, the Robert F. Hartsook chair in fundraising at the Indiana University Center on Philanthropy. Taylor nurtures his relationship with donors through a blog and regular emails, which update them on Modest Needs news but do not solicit new contributions, something many donors appreciate. Only five to ten percent of nonprofits engage in this kind of “relationship fundraising,” Sargeant said, meaning they focus on developing long-term bonds with donors instead of just relying on them to meet a particular funding target.

This model has created a community of committed donors. Of the 3,000 people who give annually to Modest Needs, 500 give regular monthly donations. Sixty-five percent of recipients turn around and donate to Modest Needs at least once. A disabled woman in Ohio sends a $1 check each month to thank Modest Needs for helping her repair a rotting floor under her bathtub; she lives on just $742 per month. These small contributions add up: Modest Needs received an average of $34,000 per month from individual donors in 2006.

But it’s never just about the money. Taylor is also making good on his goal to awaken people to their ability to effect very real positive change in the world. For instance, in one online testimonial, a Florida woman wrote, “I’ve always dreamt of having money so that I could be a major philanthropist and make a difference in our communities, but Modest Needs has reminded me that this can happen now.” In another testimonial, a Kentucky recipient wrote, “You have given me hope and faith in the goodness of people and reminded me that God is in all of us.”

Lisa Logsdon, too, understands the power of small donations and now gives what she can to Modest Needs. Long after the organization helped her help her son, she remembers how it replaced her despair with a sense of hope. “When I got the grant for Zayne’s glasses, I got back a part of me that I had given up,” Logsdon recalled. “That’s a part of the grant that’ll stay with me for my whole life.”