When Simon Baron-Cohen learned about the Holocaust as a young boy, he wondered the same thing many children do: How could people act so cruelly toward one another?

Now, decades later, that question lies at the heart of Baron-Cohen’s new book, The Science of Evil. 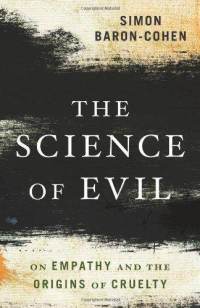 Baron-Cohen is a professor of developmental psychopathology at Cambridge University and one of the world’s leading experts on the psychology of empathy. The Science of Evil reports on what he has learned about the link between empathy and cruelty over more than two decades of research.

Rather than simply dismissing “evil” as a trait beyond comprehension, Baron-Cohen argues that human cruelty can be studied scientifically, just like any other human behavior, to uncover its causes and neurological bases—and what, if anything, we can do to prevent it.

His studies, as well as those of other neuroscientists, offer support for an intriguing theory: People responsible for acts of cruelty (or who remain bystanders to such acts) lack the neural basis for empathy.

Although everyone is capable of temporary lapses of empathy, such as when we walk past a homeless person on our way to work, we usually feel guilty or remorseful after treating someone unkindly.

But people who lack empathy more completely and feel no remorse after hurting another—what he calls “Zero-Negative”—have dysfunctional brain patterns, which explains why they are able to do harm and, in some cases, commit the most horrific crimes. (Interestingly, there are a couple of disorders—autism and Asperger’s Syndrome—that Baron Cohen refers to as “Zero-Positive,” where people lack empathy but aren’t necessarily cruel to others.)

Baron-Cohen backs up his theory with evidence from studies using fMRI technology. Scientists have been able to study the brains of psychopaths—the people most likely to commit sadistic crimes—using this technology and have found gross abnormalities in their neural activity. For example, when psychopaths are shown pictures of people suffering from pain, fMRI scans of their brains reveal decreased activity in regions integral to the empathy circuit.

In another study, teens with high levels of aggression showed activity in the reward centers of the brain when they watched films depicting the infliction of pain on someone. This suggests that for people with anti-social personality disorders, a lack of empathy may be coupled with feelings of pleasure when witnessing another’s pain.

Though some of these empathy deficiencies have been associated with environmental factors, including emotionally distant, abusive, or neglectful parents, Baron-Cohen is quick to point out that environment doesn’t explain everything.

Instead, he argues that there must be a genetic basis to empathy. Evidence to support this claim comes from studies of twins, which show that twins demonstrate similar emotional responses to witnessing pain, and they have similar abilities to identify their own emotions, even if they grew up in different environments.

Baron-Cohen’s point is that, in some people, the empathy circuits may be broken for environmental and genetic reasons that are beyond their control. Although he admits that not all the evidence is in, he makes a strong case that many people we incarcerate for acts of cruelty probably suffer from zero empathy—which, he argues, is an affliction, not “evil.” If empathy can be taught—as evidence suggests it can—then wouldn’t it be more humane to try to reform these criminals rather than simply locking them up?

Baron-Cohen poses this question, but he can’t answer it yet. More research is needed to better understand how disturbed empathy circuits play a role in human behavior and whether reform really is possible for those who commit cruel acts.

In the meantime, he argues, we as a society should do all we can to prevent zero-empathy in the first place. Teaching children how to recognize emotions—an important aspect of empathy—would be a good start; so would conducting more research on how best to teach empathy in schools.

This isn’t a touchy-feely proposal: If we can help kids grow into more empathic adults, we may be able to reduce cruelty and criminal behavior—a goal that’s not just compassionate but cost-effective as well.

“Unlike . . . the prison industry and legal system, which cost millions of dollars to keep oiled,” Baron-Cohen writes, “empathy is free.”