Imagine a bare room and two players sitting face to face, about to play a game. The first player is the “investor”; the second player is the “trustee.”

At the outset of the game, both players are endowed with a set number of points—say, 12 each—with each point equivalent to real money. 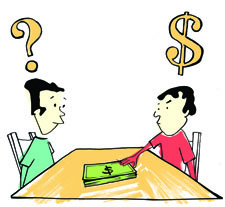 The trustee can then return any amount of her points back to the investor. After she has made her transfer back, that’s it. The game is over. Each player tallies her points and the money she’ll receive.

The investor’s decision in this game is a decision of trust, which is why social scientists refer to this as the “trust game” and use it to test trusting behavior in different situations. The more the investor transfers to the trustee, the more she stands to profit in the end. But she must trust that the trustee will return a sufficiently large amount—at least as large as the original transfer—for the game to be profitable for her. And what if the trustee returns nothing?

The game nicely captures the fundamental dilemma of trust in human society. The decision to trust always entails the risk of being exploited or betrayed. Yet if people trust and the trust is rewarded, everyone is typically better off.

To gain the benefits that come with trust, the trusting person must always overcome her natural aversion to the risk of betrayal.

Conventional economic theory maintains that people will always behave in a purely self-interested manner. According to this worldview, it makes no sense to trust, whether in a trust game or in real life, as any trust will be exploited.

The trustee will always keep her entire windfall for herself, so the investor would be better off not transferring any money in the first place.

And yet when researchers like Joyce Berg and others have had people play the trust game with real monetary stakes, they have repeatedly found that the average investor will transfer half of her initial endowment and receive similar amounts in return. Through the trust game, researchers have also discovered a number of factors that seem to drive levels of trust. Familiarity breeds trust—players tend to trust each other more with each new game. So does introducing punishments for untrustworthy behavior, or even just reminding players of their obligations to each other.

These studies have demonstrated the strength of human trust, and that humans are truly worthy of this trust from one another. They have also improved our understanding of the social factors that determine trust. But two important questions remain: Is trust truly a biologically based part of human nature, and if so, what is it in the brain that makes humans trust each other?

This question might sound complex, but there is a simple hypothesis about what steers the human brain to trust another human: a hormone called oxytocin.

Oxytocin is produced in the brain’s hypothalamus and stored in the posterior pituitary gland. We know that it helps smooth muscle contractions in childbirth and in breastfeeding mothers. But recently we’ve discovered that its applications go beyond the maternal. It turns out that oxytocin also reduces social anxiety and helps people meet and bond with each other. A man and woman involved in the mating dance are releasing oxytocin; so are friends having a good time at dinner.

Forming relationships like these involves trust, but is there a direct connection between trust and oxytocin?

To find out, my colleagues and I conducted an experiment in which participants took either oxytocin or a placebo. Fifty minutes later, participants played the trust game against four different anonymous partners. They played with real money, with each point worth almost half a Swiss franc.

Interestingly, the investors’ expectations about the back-transfer from the trustee did not differ between the oxytocin and placebo recipients. Oxytocin increased the participants’ willingness to trust others, but it did not make them more optimistic about another person’s trustworthiness.

The results indicate that oxytocin does indeed help humans overcome distrust. But does oxytocin really increase trust, or does it merely make us feel so good that we lose our aversion to risk and betrayal?

To figure that one out, we conducted a second experiment, in which investors faced the same choices as in the trust game. The investors in this experiment were again in a risky situation, but this time there was no human being on the other side of the table; instead, investors faced a computer that generated random numbers of points. Everything else in the “risk experiment” was identical to the trust experiment.

The result? Investors who’d received oxytocin behaved no differently than those in the placebo groups. We therefore concluded that the effect of oxytocin is, indeed, specific to trusting other people and the willingness to take risks in social situations. Oxytocin does not affect human attitudes toward risk and uncertainty in situations where there are no other human beings involved.
In short, trust is very much a biologically-based part of the human condition. It is, in fact, one of the distinguishing features of the human species. An element of trust characterizes almost all human social interactions. When trust is absent, we are, in a sense, dehumanized.

The discovery that oxytocin increases trust in humans is likely to have important clinical applications for patients suffering from mental disorders like social phobia or autism. Social phobia ranks as the third most common mental health disorder after depression and alcoholism; sufferers are severely impaired during social interactions, and are often unable to show even basic forms of trust toward others.

Given the results of our trust studies, the administration of oxytocin, in combination with behavioral therapy, might yield positive effects for the treatment of these patients, particularly in light of its relaxing effects in social situations.

At the same time, however, the results from these experiments raise fears of abuse. Some might suppose that unscrupulous employers or insurance companies could use oxytocin to induce trusting behavior in their employees or clients. Dishonest car salesmen might spray customers with the hormone before steering them toward a lemon.

Fortunately, most of these fears are baseless: The surreptitious administration of a substantial dose of oxytocin—for example, through air conditioning, food, or drinks—is technically impossible. Of course, one could always force the spray up another’s nose. But it’s safe to say that this would alarm recipients enough to override any glow they might get from the oxytocin.

It is more likely that advertisers might find ways to cleverly design stimuli to trigger the release of oxytocin in consumers through, for example, strategically placed smiling faces or warm handshakes, or perhaps even by measuring people’s oxytocin levels in focus groups. All this might make these consumers more inclined to trust the claims made by the advertisers. Of course, advertisers (and most socially-intelligent humans) have always intuitively understood ways to manipulate perception and build trust; this just gives them one more tool for their kit. However, knowledge can cut both ways: By better understanding the underlying biological mechanisms of these stimuli, research into oxytocin could be even more useful for protecting consumers from the manipulative strategies of marketing departments.

To some people, these findings about oxytocin might raise another concern: that trust is not subject to rational control—that it’s “all hormones.” This seems to stand in stark contrast to the traditional idea of trust being the outcome of a cognitive, rational process.

In my view, trust is both, just like other human social behaviors. We cannot deny that many of our decisions are governed by cognitive processes, which in the case of trust take into account the available information about the trustee’s motivation, the likelihood of a repeated interaction, and so on.

Nevertheless, research like this shows that our behavior is also influenced by a large number of very complex, yet identifiable, biological processes. Future research should help us understand how cognitive and biological processes interact in shaping our decisions about whom to trust.

But there’s no denying the important role trust plays in cooperative behaviors, or that humans have a deeply rooted ability to trust. It’s up to us to earn that trust from one another.