The Ethical Brain could stand as one of the most valuable byproducts of the President’s Council on Bioethics, the advisory body President Bush created in 2001 to explore the ethical questions raised by advances in biotechnology. The council had no official role in writing or publishing the book, but its author, neuroscientist Michael Gazzaniga, is one of the council’s original members; his experiences on the council seem to have left him troubled and occasionally frustrated. He writes of colleagues whose opinions “seemed to have nothing to do with bioethics, let alone science,” and he saw “how the fear of science can stifle rather than stimulate further research when people think that scientific discoveries will lead to practices that are deemed ‘unethical.’”

The Ethical Brain is Gazzaniga’s attempt to offer a more rational approach to questions of bioethics. He draws upon the latest findings in neuroscience to inform his careful deliberations on issues ranging from stem cell research to euthanasia to the ethics of developing “smart drugs” that could boost users’ intelligence. In writing the book, he says he learned how difficult it can be to expunge personal biases from one’s own ethical analysis. But he turns that dilemma into one of the book’s great assets, examining the neurological bases of our “gut” ethical instincts—and even considering the possibility of a universal system of ethics that’s hard-wired into our brains. 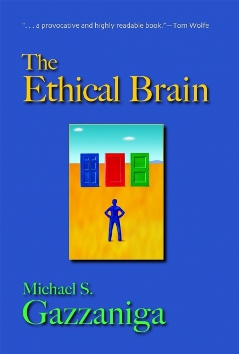 Gazzaniga makes clear from the start of his book that he is a neuroscientist, not an ethicist, and that there are no easy answers to any of the questions he considers. His book’s strength lies in its clear and readable presentation of the scientific facts that bear on these bioethical questions. His chapter on enhancing the brain through “smart drugs,” for instance, sheds light on the neurological basis of intelligence and the relationship between genes and environment. Gazzaniga concludes that the factors contributing to intelligence are so complex, and the definitions of “smart” so relative, that these drugs are no more ethically offensive than alcohol or Prozac, and thus do not warrant being withheld from the public.

Yet in this and the other ethical dilemmas he considers, Gazzaniga seems to recognize that reasonable people can examine the same set of facts and reach different conclusions. The underlying purpose of his book is not to advance a particular set of scientific initiatives, but to show how knowledge of scientific findings can—and must—be applied to important ethical decisions. One can only hope that Gazzaniga’s message will resonate with his colleagues on the bioethics council—and with other members of the Bush administration as well.