The Jayson Blair scandal at The New York Times showed that professional success and professional ethics don’t necessarily go hand-in-hand. It seemed that an ambitious young journalist could fly through the ranks despite—or even because of—an inability to tell right from wrong.

These moral failings go beyond Jayson Blair and the profession of journalism, according to four Harvard University researchers who have studied “good work”—work that is skillful and socially responsible—since the late 1990s. 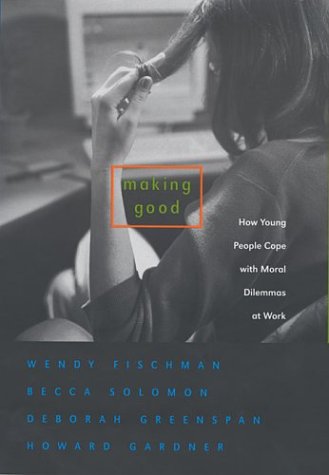 Making Good: How Young People Cope with Moral Dilemmas at Work summarizes the findings from their study, which is part of the broader Good Work Project led by one of Making Good’s co-authors, psychologist Howard Gardner. Gardner is well-known for his expertise in childhood education and his theory of multiple intelligences. Here he combines his longstanding investigation of how people develop particular talents with a focus on how they develop moral reasoning skills.

Gardner and his research team examined more than 100 young people at the start of their careers in one of three fields: journalism, science, or acting. Through in-depth interviews and a survey designed to assess participants’ values, the authors form a picture of how these budding professionals balance their ambition, demands from authority figures, and a desire to maintain personal integrity. When the researchers compare this picture with information gathered from veteran professionals in the same three fields, the result is troubling.

Consistently, the young professionals point to fierce competition as a source of stress and a valid reason for crossing moral boundaries. They seem to feel they are “out there on their own” to succeed, while veterans often speak of the powerful support they received from mentors and role models. This feeling among the young participants often translates into a willingness to justify unethical actions, which they say they will make up for later, after they’ve achieved success.

To be fair, the book also includes stories of young people who stood by their values, even if it meant not getting ahead, and of others who were seriously considering changing fields because of pressure to behave unethically. The values survey also shows that young people do value good work, even if they’re not always capable of producing it.

Ultimately Gardner and his co-authors identify six factors that determine whether an individual is likely to do good work. These include having strong role models, supportive peers, and regular opportunities to discuss an organization’s core principles. But, as the authors recognize, none of these factors can develop overnight. It will take considerable individual and collective willpower to make more young professionals feel committed to anything beyond their own personal success. That kind of shift will require good, ongoing work by American culture as a whole, not just by young people struggling to succeed.