I’m usually an adventurous eater, always up for Thai, Cuban, Indian, Ethiopian, Japanese—well, almost always. Some days, all I crave is a honey and jam sandwich cut on a diagonal. How could my tastes change so drastically? 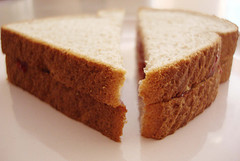 It seems that my different tastes may depend on my different moods, according to a new study published in Psychological Science. In the study, a team of international scientists looked at how our moods affect our preferences for the new or the familiar. The researchers asked 16 students to write about either a happy or sad memory—a way to put the students in a positive or negative mood. They were then shown pictures of random dot patterns; some of the patterns were shown repeatedly to make them more familiar. The participants rated how much they liked the patterns and how familiar they were. At the same time, the experimenters measured how much the students smiled, frowned, or showed physiological changes suggesting they were emotionally aroused.

The differences between the happy and sad participants were significant. Students in a sad mood said they liked familiar dot patterns more than new patterns. In fact, after they were initially frowning, the sad students smiled much more when shown familiar dot patterns. Sad students’ levels of emotional arousal were also markedly higher for the most familiar dot patterns—on par with the already aroused happy students. The researchers attribute this finding to “the warm glow of familiarity:” The comfort of something familiar greatly boosts our happiness, a finding that’s consistent with previous research.

But this study then went one step further, showing how familiar objects don’t always bring us happiness. Though happy students identified some dot patterns as more familiar, they did not like them more. The researchers suggest that when we’re happy, we’re drawn to novelty and adventure; familiar objects lose their appeal. “Familiarity’s value depends on affective context,” they write. “If a mood signals an unsafe environment, familiarity is positive. If a mood signals a safe environment, familiarity loses its glow.”

In an interview, one of the study’s authors, Piotr Winkielman, a psychologist at the University of California, San Diego, notes that its findings have implications that go far beyond what to have for lunch. Applied to romantic relationships, he says, the results seem to support a German saying: “happy people are unfaithful, unhappy stay true.”

“So perhaps the advice for a successful relationship is to introduce some new things,” he adds, “even when things are happy.”