Not happy with what you see when you look in a mirror? Well, you can take a hike.

Seriously. New research from the United Kingdom finds strolling in nature—or even looking at photographs of the natural world—leaves people feeling better about their bodies. 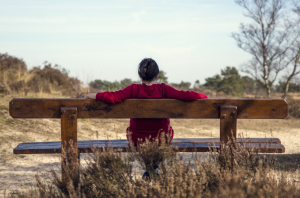 In recent years, a series of studies have found that time spent in nature offers a range of benefits, from easing depression to increasing altruism. This latest work suggests it can also mute internal criticism of one’s less-than-perfect figure.

In the journal Body Image, a research team led by psychologist Viren Swami of Anglia Ruskin University in Cambridge describes five studies that demonstrate this dynamic. The first featured a group of university undergraduates who looked at and evaluated a series of photographs.

Half saw images of the natural world, such as lakes, mountains, and forests, while the others were exposed to urban scenes such as city streets and industrial buildings.

Before and after the viewing, all participants filled out a body-image survey. They reported how satisfied or dissatisfied they felt about their weight, the size and shape of their body, and their physical appearance in general.

Those who viewed images of the natural world were significantly more satisfied with their body at the end of the experiment than they were when it started. This positive shift in attitude did not occur among those who saw cityscapes.

After replicating these results in two additional studies, the researchers tried a different approach: examining the effect of actually spending time in nature. The participants, 84 women and 79 men, all took a 1.5-mile-long walk.

Half strolled “through a natural environment in Hampstead Heath, a 790-acre green space in north London encompassing ponds, woodlands, hills, and landscapes,” the researchers write. The others “began at the same starting point, but went through a medium-density built environment encompassing high-rise housing blocks, offices and garages, (and) small shops.”

Before and after their journey, all participants filled out a “body appreciation” questionnaire, in which they noted their level of agreement with statements such as “I feel good about my body” and “I am comfortable in my body.”

The results: Those who took the nature walk scored significantly higher on the second test, indicating a higher degree of acceptance of their bodies. In contrast, scores actually dropped for those who took the walk in the city.

“There are several reasons why exposure to nature could be having this effect,” Swami said in announcing the findings. “It might be that it distances people, physically and mentally, from appearance-focused situations that are one of the causes of negative body image.”

In addition, spending time in a natural setting “may provide people with cognitive quiet, which in turn may foster self-compassion,” the researchers write.

Or perhaps it simply reminds us of the insignificance of our own problems, and inspires a decrease in self-consciousness. Nature can do that. After all, no bear ever felt bad about her body.

This story originally appeared as “Exposure to Nature Promotes a More Positive Body Image” on Pacific Standard, an editorial partner site. Subscribe to the magazine in print and follow Pacific Standard on Twitter to support journalism in the public interest.