Today 34 percent of adolescents ages 12 to 19 are overweight or obese. The problem is so big, linked to so many physical, psychological, and social health risks, that the federal government has been getting involved: In one of her first initiatives as first lady, Michelle Obama started Let’s Move!, a campaign to encourage healthier food choices and physical activity among kids.

But as this and other anti-obesity initiatives get off the ground across the country, a new study suggests that the fight against obesity truly begins at home, with the messages kids pick up from their parents. 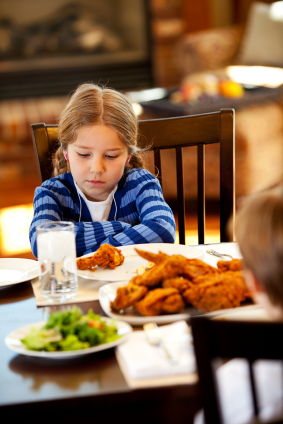 The study, led by Taya Cromley at UC San Diego, offers insight into how parents can help—or harm—an overweight child’s feelings about their body and food.

The researchers surveyed 103 overweight youth and their parents (over 90 percent of whom were also overweight or obese) to determine the effects parents have on their child’s eating behaviors and body image. They asked parents and kids about the steps they took to control their weight and their satisfaction with their body; parents were also asked about their own levels of self-esteem and rates of depression. Both parents and children answered surveys to determine how positively the families communicated, bonded, and worked together.

The researchers found that parents’ diets and attitudes toward food can have a big impact on their kids. Children of parents who followed restrictive diets, like cutting carbs or drinking liquid meal-replacements, were more likely to engage in unhealthy weight-control behaviors like skipping meals, taking diet pills, or purging.

What’s more, parents who used strategies to control their weight, even healthy strategies like exercising more or cutting down on snacking, had adolescents who reported worse body image and put greater importance on being thin.

But the news isn’t all bad. The study also found that positive parent-child relationships and regular family dinners positively impacted adolescents’ self-esteem and satisfaction with their bodies. Also, children ate more fruits and vegetables if their mother was concerned with eating healthily.

Exersise is the main ingredient here.  I work at a school and I cant believe how many parents are to lazy to get out of their car and come and get their kids from the room.  They will sit in their car and wait 10 extra minutes instead of walking 100 yards or less the pick their kids up inside.  I will have to say that 90 percent or over weight and their kids are the sameway.  People need to get up and start walking.  Instead of driving around the parking lot 4 times to find that close spot to park walk from the very farthest parking slot that is always open.  It is little things like this that will make you Obese to the right step to being healthy.

I totally agree with this.  I am really big into nutrition these days but that was not always the case.  I notice that people rarely even cook there own meals anymore, most people live off of fast food and restaurants.  Now I do not seem any harm in going to eat out once in a while, but if you and your kids are eating fast food every meal you can be guaranteed that the vitamins and nutrients your body needs to function properly is lacking because those foods are striped of most vitamins.