Having a bad attitude can kill you.

That’s the upshot of a large body of scientific research which suggests that negative emotions are connected to developing cardiovascular disease.

But can positive emotions actually extend your life? The answer is yes, according to a new study published in the American Journal of Cardiology. It finds that happy, cheerful individuals have significantly lower chances of heart attack and other cardiac problems. 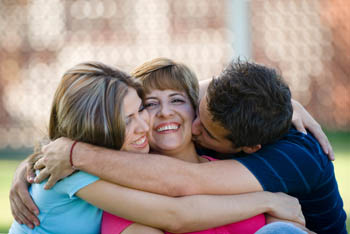 This is one of the first studies to suggest that positive emotional well-being—measured by characteristics such as cheerfulness and life satisfaction—may actually decrease the risk of heart conditions.

“One unique aspect of our study is that we looked at a positive mental trait, as opposed to the main body of research looking at negative traits,” says Lisa Yanek, the lead author of the study and an assistant professor of medicine at Johns Hopkins University.

What’s more, Yanek and her co-authors believe it is the first study to document the health benefits of positive mental traits among people at high risk for cardiovascular disease.

In the study, the researchers periodically analyzed data on nearly 1,500 healthy individuals who were at high risk for coronary artery disease (CAD) because they had siblings who suffered from CAD before they were 60 years old. Coronary artery disease is the most common type of heart disease, and is caused by plaque buildup along the walls of the arteries, which results in restricted blood flow and increased stress on the heart. This buildup often leads to heart attack and is the leading cause of death worldwide.

Between 1985 and 2007, the healthy (but at-risk) siblings underwent physical examinations and also completed a survey measuring their “general well-being.” According to the authors, positive well-being “represents the absence of negative well-being or depression combined with other positive components,” including positive emotions like cheerfulness, a positive outlook on life, and high life satisfaction. The team also tracked changes to the participants’ lifestyles, such as their levels of exercise and whether they smoked.

Based on this data, the researchers categorized each participant into a low-, intermediate-, or high-risk category—and they found that a positive approach to life improved cardiovascular health, especially among people in the highest-risk category.

In fact, after following up with the participants, their statistical analysis showed that positive well-being was associated with an average 33 percent reduction in CAD events in the high-risk population with a family history of early CAD, and a striking 48 percent reduction in the highest subgroup within this high-risk group, regardless of other potential risk factors including like their race, gender, and whether they smoked.

“The fact that we see this association, particularly in this high-risk group, is very interesting, as it was unexpected,” says Yanek. “We were surprised to see the greatest magnitude of association in the siblings at highest risk.”

The team also conducted a similar analysis of a preexisting data set of nearly 6,000 healthy United States citizens and determined that positive well-being was associated with a 13 percent reduction in the incidence of CAD, independent of other traditional risk factors.

This is encouraging news for people with a natural positive disposition, but is there hope for everyone else?

“Positive well-being seems to be a trait, something that you are born with,” says Yanek. But she adds that “other studies have found that smiling can help improve mood and decease stress. Mood is one of the elements of positive well-being, so further studies are needed to clarify this finding.”

In fact, research from Sonja Lyubomirsky, a positive psychology research at the University of California, Riverside, indicates that up to 40 percent of our happiness maybe under our control, dependent on daily actions such as building relationships, expressing gratitude, practicing kindness, dropping grudges, exercising regularly, and getting enough sleep.

“Happiness takes work,” as Lyubomirsky says in a Greater Good video. “The good news is that the activities that foster happiness and well-being can become habitual over time, and so once they become habitual, the effort decreases.”