Douglas Vakoch’s job is to answer two of the more difficult questions on Earth: If we try to communicate with extraterrestrials, what should we say to them, and how can we make sure they’ll understand us? So far, he thinks the best answer involves communicating altruism.

Vakoch directs the Interstellar Message Composition Project at the SETI (Search for Extraterrestrial Intelligence) Institute, a nonprofit in Mountain View, California, that searches for intelligent life in outer space. His project—charged with composing a message that may someday be sent to extraterrestrials (ET)—has considered sending messages that convey basic scientific or mathematical principles, assuming these would be clear to any civilization technologically capable of communicating with Earth. But Vakoch believes that approach doesn’t go far enough. 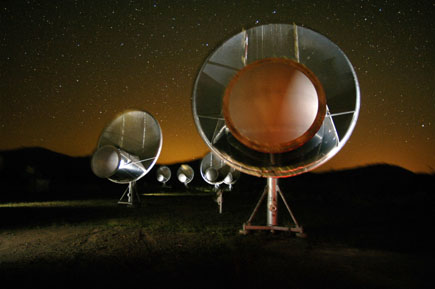 “If we only try to express ourselves by talking about the periodic table of elements, or saying we know that two plus two equals four, it’ll be a very impoverished view of ourselves,” he says.

For the past six years, Vakoch, a psychologist and the only social scientist employed by SETI, has been brainstorming ways to tell extraterrestrials about the better side of human nature, the side characterized by kindness and generosity. He thinks it may be important to tell ET about the human propensity for altruism so ET will understand one thing we hope to gain from our transmission: A message in return. But Vakoch says the larger purpose behind communicating altruism is that it’s among our highest ideals, and unlike other ideals—like beauty, truth, or justice—some forms of altruism can be communicated in relatively straightforward ways.

Vakoch stresses that he has no illusions about human behavior. “If we send a message to ET saying we are fundamentally an altruistic civilization, I think it would really be a lie.”

But Vakoch believes it wouldn’t be dishonest to show that we strive to be altruistic. And he thinks it would be fair to illustrate certain forms of altruism widely practiced among humans. For example, psychologists have long studied reciprocal altruism, tit-for-tat scenarios in which we give someone a gift and trust that person will eventually return the favor. Vakoch finds that concept especially appropriate because we’d hope to see our message reciprocated with a reply back.

Much of the challenge in communicating with ET lies in finding a language and grammar that would be legible to an alien civilization. To address this challenge, Vakoch has diversified the kind of people involved in his project, bringing together anthropologists, philosophers, physicists, astronomers, theologians, musicians, and artists, among others. Over the last five years, Vakoch has convened these people for a series of meetings, starting with a 2003 workshop in Paris called “Encoding Altruism.” Discussions at these meetings have taken the project in directions not often considered by space exploration. For example, to get a better sense of how to communicate with ET, they’ve examined anthropological research on cross-cultural communication, and even looked at how various animal species communicate with one another.

“Until now, most of the SETI message discussion has been carried out within engineering and astronomy,” says Roger Malina, an astrophysicist who attended the “Encoding Altruism” workshop. “Doug’s projects have opened up the debate by drawing on research and ideas from interspecies communication, or even how historians interpret texts from earlier civilizations.”

Through discussions with colleagues, Vakoch has come to believe that reciprocal altruism might be relatively easy to communicate. Some of Vakoch’s colleagues have suggested sending ET computer programs that simulate an example of this form of altruism. The “actors” in the scenario would be entities that exist so long as they cooperate with each other. As they cooperate, they gain mass. But if they don’t cooperate, they lose mass, until they ultimately disappear, or “die.”

Vakoch also believes his project is capable of representing kin selection, another form of altruism where people put their life on the line for a close relative in the hope that this relative—and their shared genetic material—will live on. To illustrate kin selection, Vakoch says newer messages could represent the parent-child relationship, showing how fractions of genetic material are passed down from one generation to the next.

How likely is it that any of these messages will be put to use? The more we learn from astronomy, says Vakoch, the more likely it seems that ET could exist. Until the mid-1990s, there was no direct evidence of any planets outside our solar system. Today, with the advent of new methods for detecting planets, we’ve found more than 250.

But Vakoch stresses that if or when humankind decides to send a message—or even reply to a message we receive from ET—SETI staff don’t want to be the only ones involved. “Any decision about a transmission really involves humankind as a whole,” says Vakoch. “It can’t be made by a handful of scientists.” He notes that while SETI scientists have already given the subject a lot of thought, there are no laws regulating interstellar communication. Anyone can transmit a message into space at any time, without consulting SETI or anyone else, though it would take hundreds or even thousands of years to reach its intended destination.

Regardless of when or how these messages are sent, Vakoch says the Interstellar Message Composition Project has already yielded benefits here on Earth. “The whole process of deciding what we would want to say in messages to other worlds forces us to examine what some of our highest values are,” he says. “And it also makes us realize how we often fall short of them.”