I once heard that problems need to be understood in the context of development: Losing your favorite teddy, for example, can be as devastating for a three-year old as losing your house can be for an adult.

I sometimes have to remind myself of this when my kids experience emotional extremes over small things. 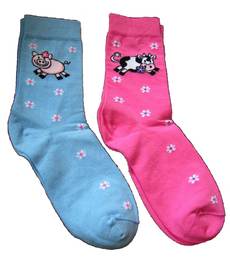 Take my six year old, for instance. The other morning, I asked him to put on his socks and shoes while I dressed his little brother. Five minutes later, I found big brother still sitting by the door, barefoot and pouting. As I approached, he threw the socks across the room and started crying.

Usually, we wouldn’t use socks as a diagnostic tool for intelligence. Yet for a six year old, seeing everyone except him do something so effortlessly must be endlessly frustrating and seem to suggest something about his own ability.

If you follow this blog, you’ll know that a recurring theme is that we can view our abilities as either fixed or as something we can grow and develop; the latter view is better for helping us cope with frustration (for more on this, see this post on math skills or this post on the genetic basis of intelligence).

Here, with socks of all things, was a perfect opportunity to reinforce the idea that we can grow our intelligence—an idea to which he had only nodded, but I could sense was not really getting, when frustrated with math, reading, or drawing.

A key aspect of the “grow your intelligence message” is the implications it has for the experience of difficulty. If one believes that abilities and intelligence are fixed or wired in us, then experiencing difficulty on a task can only mean one thing: that one must not have the correct wiring, genetic makeup, or inherent ability to succeed at that task. It’s very easy to come to this conclusion in the face of failure: I received a message from a student of mine the other day who apologized for not doing well on an exam, and she remarked, “I must not be cut out for this.”

However, if one believes that intelligence is malleable and can grow with practice, then the very psychological meaning of difficulty changes: It now suggests you are activating your intelligence, that you are flexing and practicing your skills. Difficulty is to ability like water is to a growing plant; as such, you become resilient in the face of trouble.

A study by Heidi Grant Halvorson and Carol Dweck showed this clearly among pre-med students taking a very difficult science class. Those who didn’t do well in their midterm but had learning goals did much better in their second exam than did those who were more focused on their grade than on learning.

So I gathered up the socks and showed my six year old, slowly, how to put them on: You make sure they are not inside out, you line up the heel with your own, you open them up with your thumbs so that your foot goes in more easily. (As we did it, I realized I had forgotten how hard it actually is to put socks on! So many things to keep track of.) He looked at me with a pained expression as I told him, “It’s good that it’s difficult, because it activates your intelligence!” The same reaction as with the reading and math and coloring. I tried other ways of saying it: “See, trouble is good!,” and, “It turns on your intelligence!”

I had basically already put his socks on while we practiced, but as I stood up to chase his little brother down, I actually took his socks off again. He stared at me as I handed the socks back to him.

He looked at me with wide eyes, and then the most amazing thing happened.

He cracked up! Just started laughing at what I had told him.

At that moment, I knew he got it. He finally understood what I meant about trouble and practice. He still put on his socks all wrong, but I was a proud, proud daddy.

So, as 2012 gets underway and you think about your New Year’s resolutions, consider a class that you know will be difficult, a gym routine that will be a challenge, or a new skill that you fear you may not be cut out for.

In short, go find some trouble. And a pair of nice socks to go along with it, so you can remember this post.

I, too, have realized the value in putting oneself on
the line in novel ways and found the perfect
context in the local Hackerspace called Noisebridge
in SF. Part of my ‘trouble’ is that I am 60 and I have
never played neigh even seen a computer game.
Need I say that most of the clientele is considerably
younger than I and all of the jaws dropped when I
revealed this little fact on my 3rd visit. So I want to
say that as I slowly solder my way towards the
creation of a new LED bike light, I am experiencing
all kinds of developing skills coming to Life - not
the least of ’ staying social in a changing landscape
of humanity. And my soldering, in spite of the
arthritis and thick lenses, is getting pretty good,
too! Hackerspace is a place to find trouble!

Very nice post. I have realized being a father myself of 5 year old that putting her in a challenging or telling her to something of her own she will try to do her best way but then if you are there to watch her and guide her when she is stuck helps a great deal in building her confidence level.

Great *specific* example of how to foster that growth
mindset!