Bogged down with responsibilities at work and at home? Many of us wish we had more time to get it all done—and still steal time to relax.

While adding more hours to our day may not be possible, a recent study suggests a little mindfulness meditation can help us at least feel like we have more time in our lives. 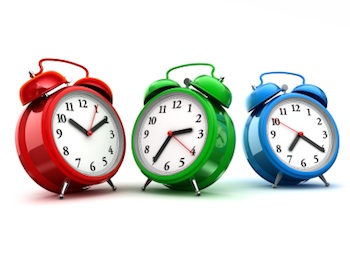 Researcher Robin Kramer and his colleagues trained students at the University of Kent in the United Kingdom to link different shapes to either a short and a long period of time. Shapes shown on a computer screen for 400 milliseconds represented a short duration, while shapes shown for 1600 milliseconds represented a long duration. Next, all of the participants were presented with shapes held on the screen for a variety of durations and had to determine whether the duration was more similar to the short or the long period of time.

Half of the participants then listened to a 10-minute mindfulness meditation exercise, which guided them to concentrate on the movement of their breath throughout their body. The other half listened to the audiobook version of The Hobbit for 10 minutes. Immediately afterward, the researchers again presented them with varying durations of time.

The results, published in the journal Consciousness and Cognition, show that the meditators were more likely to report that durations of time were “long” after they had meditated. In contrast, participants didn’t report any difference in time duration if they had listened to the Hobbit recording. The researchers conclude that mindfulness meditation made participants experience time as passing more slowly. Remarkably, they saw this effect after just a single 10-minute meditation, among participants who had no prior meditation experience.

Though more study is needed to explain this finding, the researchers suspect that the mindfulness meditation altered time perception because it induced people to shift their attention inward. In the paper, the authors write that when people are distracted by a task in the world around them, they have less capacity to pay attention to time passing, and so experience time as moving more quickly. Because the mindfulness meditation exercise cued participants to focus on internal processes such as their breath, that attentional shift may have sharpened their capacity to notice time passing.

Kramer thinks that this finding could be used in everyday situations, to help people gain control over their experience when they feel short on time. “If things feel like they’re running away,” he says, “slowing things down might help you deal with them more easily.”

Kramer also speculates that while a mindfulness exercise that shifts attention to internal events extends one’s experience of time, a mindfulness exercise that shifts attention to an external event could potentially make time feel like it’s passing more quickly. If this were true, mindfulness could have clinical applications for people who feel like time is moving too slowly, such as those experiencing depression, who tend to overestimate the duration of negative events.

Though Greater Good has previously reported on many positive effects of mindfulness, as well as on how experiencing awe can alter how we perceive time, this study is one of the first to investigate the relationship between mindfulness and time perception. In the future, the researchers aim to uncover how long mindfulness meditation’s effects on time perception last, and to explore further the precise causes of this shift in time perception.