How many of us know people who have trouble stopping behaviors that are causing them physical or emotional harm? How many of us are those people?

If you or someone you know is struggling to make positive change in life, you may want to pick up James and Janice Prochaska’s newest book, Changing to Thrive. James Prochaska, eminent psychologist and founder of the Cancer Prevention Research Center, and Janice Prochaska—both experts in health behavior change—have written a compassionate and informative book for helping people move from being uncommitted to making change all the way to taking action for change and beyond. The Prochaskas’ program has been relatively successful, according to research, often reaching people who might otherwise give up. 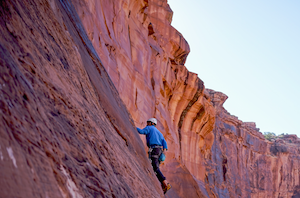 The main problem with our current models of change, the authors argue, is that too many professionals ignore the emotional and psychological barriers to change. They assume that if someone is not ready to take action—if they are in what the Prochaskas call “the precontemplation stage” of change—they are immune to programs aimed at helping them. This belief then becomes a self-fulfilling prophecy.

“People in precontemplation are often labeled as uncooperative, resistant, unmotivated, or not ready for behavior change programs,” they write. “However, our research showed us that it was the health professionals who were not ready for precontemplators.”

Instead of assuming people don’t want to change when they aren’t taking action, the Prochaskas suggest that helpers (or the people stuck in unhealthy patterns) should address head-on the most common reasons people avoid committing to change:

All of these barriers, the authors argue, can lead to stagnation; so it’s important to know how to address them before pressing people to take action. Instead of berating people, accusing them of personality defects, or scaring them with statistics, it’s more effective to show understanding and to give them information and hope.

“Providing innovative and more effective solutions for old problems is the best way to generate hope that can lead to the right kind of help,” they write.

Though the Prochaskas’ book goes into some of the research on behavioral change, they are primarily focused on laying out specific steps people can take to make change without getting stuck. Often, they note, the process is non-linear and people encounter psychological barriers—like fear of failure, doubt about the effectiveness of programs, worry about finding the perfect route to change, or the desire for certainty—that keep them from moving forward. Normalizing these reactions to change, giving people ways to reframe fears and disappointments, and providing skills for handling distress are paramount for helping people overcome these barriers, they argue.

Other barriers to change include the serious concerns some people have about the consequences of changing. For example, in a chapter on alcohol abuse, the authors tell the story of a client named David who often drank in the context of work social events. Though he may have worried about the effects on his body of drinking, he was also concerned about how stopping drinking might impact his work relationships. Taking these concerns seriously and creating alternative plans for addressing them—rather than believing that David has to “hit bottom” to change—is a much more compassionate as well as productive means of helping him.

In this example, their route to helping David included accepting his arguments as valid (if misguided), guiding him toward seeing that there were more “pros” than “cons” for stopping drinking, increasing social support in his life for stopping drinking, and making contingency plans for himself if he felt the urge to drink. 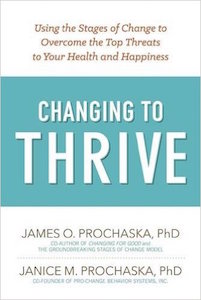 Separate chapters in the book are devoted to helping people with the four most common behavioral health issues—smoking, alcohol abuse, overeating, and lack of exercise. While each chapter addresses the underlying psychological barriers to change, they are also full of other tools people can use to help themselves with change.

Taking it one step further, the authors recommend tips for increasing well-being beyond behavioral change. They include several research-based practices to increase positivity in one’s life, including learning relaxation techniques like meditation for decreasing stress, seeking opportunities to feel awe or to witness human nature at its best (to experience “moral elevation”), practicing gratitude, pursuing personal interests, and finding purpose in life. Each of these, they insist, will help those working toward change to not only address problems but to thrive.

While this book is primarily a self-help book—and not dedicated to outlining the research in this area—it’s nonetheless firmly grounded in Prochaska’s well-regarded theories of change. For those who need a boost in getting started on a healthier lifestyle, this book may be just the one for you.