About two or three years ago, as I walked out of the psychology department after work, a surreal scene unfolded in front of me. A pick-up truck with a man and a woman inside screeched to a stop in between lanes. The guy jumped out of the driver’s side, ran around the truck, threw open the passenger door, and started trying to yank the woman out. Violently.

I and about 10 other pedestrians stood there dumbfounded as the struggle unfolded. Other cars drove by, looking perplexed but not stopping. Nobody rushed to help, to call for help, to even speak. Eventually, the guy gave up in frustration, slammed the door shut, ran back to his side, and the pair screeched off again.

I have no idea what happened to them. Did they crash? Did the woman face further violence? I am certain that even after the incident was over, not one of us followed up with a call to the police.

This type of behavior is more common that we’d all like to think—so common, in fact, that there is a name for it. It’s called the bystander effect, and it can be shown reliably in real-world social situations (see, for example, this clip). You might think that with the truck incident, people didn’t act out of fear for their own safety (and this is certainly one reason in many cases), but it also occurs when there is no potential for harm to the bystander.

How does this relate to the unfolding Penn State scandal and tragedy? I read Maureen Dowd’s column about it with a mix of disgust and sadness. Certainly, the person who walked into the locker room to find the coach allegedly in the middle of child molestation, then-graduate assistant Mike McQueary, has received his share of vilification. “He sees abuse, and he ran to his DADDY?” chastised one incredulous reader, implying his response was, at best, infantile. Even Dowd couldn’t believe it. 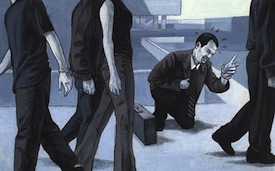 Meanwhile, immediately after football coach Joe Paterno was fired by the Penn State board of trustees, a student demonstration in support of Paterno broke out, with cars turned over and placards reading “JoePa forever!” and “JoePa IS Penn State!”

Now, of course, watching a case of potential domestic violence is not the same as watching child molestation in the locker room showers. One might also argue that with the truck incident, it wasn’t as clear what the situation was “about,” whereas the scene that graduate assistant coach Mike McQueary walked into was very clearly wrong and needed to be stopped. Dowd, in fact, wrote, “It would appear to be the rare case of a pedophile caught in the act, and you’d think a graduate student would know enough to stop the rape and call the police.”

This is exactly where Maureen Dowd’s intuition is wrong. You see, ambiguity in emergency situations can arise from multiple sources. Events can be unclear not only in their interpretation, but in terms of how one should react.

Paradoxically, emergency situations are almost by definition unclear as to how one should respond precisely because they are uncommon, out of the ordinary events that don’t have a ready script to follow. A colleague of mine once walked into a rare-books collection room in the library stacks of Yale and found two undergraduates having sex; he stopped, stared, and after an awkward pause, said “excuse me” and shut the door softly. The point here is not that the incident itself was unclear—this clearly shouldn’t have been happening, but the way one should respond in these kinds of situations is, while it’s happening, unclear.

Imagine McQueary, walking into the showers to find the revered Sandusky doing something that seemed completely out of character with his golden reputation in the locker room. These incidents can be so shocking that people—literally—can’t believe their own eyes, and it takes time to incorporate totally discrepant information with prior knowledge. Such situations are also very anxiety provoking, making it all the more difficult to respond quickly.

According to news reports, McQueary told Paterno the night after the incident, and Paterno told the university President, who even after time passed did not act to bring justice. They merely took away Sandusky’s keys.

Was the Board of Trustees correct to fire Paterno and the University President? Absolutely. Why? Because in these kinds of out-of-the-ordinary situations, people look to leaders and authority figures for cues as to how one should act. And by not acting, Paterno and the President were essentially communicating to McQueary and others who might have known about Sandusky’s behavior how to react.

True, McQueary might have taken it upon himself to be a whisteblower—but given that Paterno IS Penn State, how is a lowly graduate assistant coach going to go against that? The type of fortitude required for that type of behavior is a burden that people should not be vilified for not shouldering. Rather than vilifying McQueary—rather than holding rallies in support of JoePa—it is important to recognize that Paterno and the President did not fulfill their leadership roles.

The incident reminds us of the importance of those whistleblower and emergency preparedness posters and campaigns. They give us that missing script to follow, reminding people of what they need to do while they have their wits about them. Because once an emergency hits, as evidenced by this unfolding tragedy, our wits can easily go out the window.

I attended to a man in a very similar situation in downtown San Francisco. There were about 30 people starring, doing nothing as he was dying. A couple of us acted and saved him. It was the most powerful thing to ever happen to me. ABC ended up covering the story and the reunion. God was looking out for this man. Here is the news clip: