Malusi Mpumlwana was a young enthusiastic antiapartheid activist and a close associate of Steve Biko in South Africa’s crucial Black Consciousness Movement of the late 1970s and early 1980s. He was involved in vital community development and health projects with impoverished and often demoralized rural communities. As a result, he and his wife were under strict surveillance, constantly harassed by the ubiquitous security police. They were frequently held in detention without trial.

I remember well a day Malusi gave the security police the slip and came to my office in Johannesburg, where I was serving as general secretary of the South African Council of Churches. He told me that during his frequent stints in detention, when the security police routinely tortured him, he used to think, “These are God’s children and yet they are behaving like animals. They need us to help them recover the humanity they have lost.” For our struggle against apartheid to be successful, it required remarkable young people like Malusi. 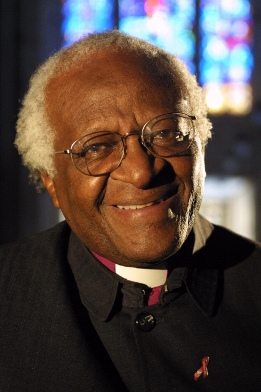 All South Africans were less than whole because of apartheid. Blacks suffered years of cruelty and oppression, while many privileged whites became more uncaring, less compassionate, less humane, and therefore less human. Yet during these years of suffering and inequality, each South African’s humanity was still tied to that of all others, white or Black, friend or enemy. For our own dignity can only be measured in the way we treat others. This was Malusi’s extraordinary insight.

I saw the power of this idea when I was serving as chairman of the Truth and Reconciliation Commission in South Africa. This was the commission that the postapartheid government, headed by our president, Nelson Mandela, had established to move us beyond the cycles of retribution and violence that had plagued so many other countries during their transitions from oppression to democracy. The commission granted perpetrators of political crimes the opportunity to appeal for amnesty by giving a full and truthful account of their actions and, if they so chose, an opportunity to ask for forgiveness—opportunities that some took and others did not. The commission also gave victims of political crimes a chance to tell their stories, hear confessions, and thus unburden themselves from the pain and suffering they had experienced.

For our nation to heal and become a more humane place, we had to embrace our enemies as well as our friends. The same is true the world over. True enduring peace—between countries, within a country, within a community, within a family—requires real reconciliation between former enemies and even between loved ones who have struggled with one another.

How could anyone really think that true reconciliation could avoid a proper confrontation? After a husband and wife or two friends have quarreled, if they merely seek to gloss over their differences or metaphorically paper over the cracks, they must not be surprised when they are soon at it again, perhaps more violently than before, because they have tried to heal their ailment lightly.

True reconciliation is based on forgiveness, and forgiveness is based on true confession, and confession is based on penitence, on contrition, on sorrow for what you have done. We know that when a husband and wife have quarreled, one of them must be ready to say the most difficult words in any language, “I’m sorry,” and the other must be ready to forgive for there to be a future for their relationship. This is true between parents and children, between siblings, between neighbors, and between friends. Equally, confession, forgiveness, and reconciliation in the lives of nations are not just airy-fairy religious and spiritual things, nebulous and unrealistic. They are the stuff of practical politics.

Those who forget the past, as many have pointed out, are doomed to repeat it. Just in terms of human psychology, we in South Africa knew that to have blanket amnesty where no disclosure was made would not deal with our past. It is not dealing with the past to say glibly, “Let bygones be bygones,” for then they will never be bygones. How can you forgive if you do not know what or whom to forgive? In our commission hearings, we required full disclosure for us to grant amnesty. Only then, we thought, would the process of requesting and receiving forgiveness be healing and transformative for all involved. The commission’s record shows that its standards for disclosure and amnesty were high indeed: of the more than 7,000 applications submitted to the Truth and Reconciliation Commission, it granted amnesty to only 849 of them.

Unearthing the truth was necessary not only for the victims to heal, but for the perpetrators as well. Guilt, even unacknowledged guilt, has a negative effect on the guilty. One day it will come out in some form or another. We must be radical. We must go to the root, remove that which is festering, cleanse and cauterize, and then a new beginning is possible.

Forgiveness gives us the capacity to make a new start. That is the power, the rationale, of confession and forgiveness. It is to say, “I have fallen but I am not going to remain there. Please forgive me.” And forgiveness is the grace by which you enable the other person to get up, and get up with dignity, to begin anew. Not to forgive leads to bitterness and hatred, which, just like self-hatred and self-contempt, gnaw away at the vitals of one’s being. Whether hatred is projected out or projected in, it is always corrosive of the human spirit.

We have all experienced how much better we feel after apologies are made and accepted, but even still it is so hard for us to say that we are sorry. I often find it difficult to say these words to my wife in the intimacy and love of our bedroom. How much more difficult it is to say these words to our friends, our neighbors, and our coworkers. Asking for forgiveness requires that we take responsibility for our part in the rupture that has occurred in the relationship. We can always make excuses for ourselves and find justifications for our actions, however contorted, but we know that these keep us locked in the prison of blame and shame.

In the story of Adam and Eve, the Bible reminds us of how easy it is to blame others. When God confronted Adam about eating the forbidden fruit from the Tree of Knowledge of Good and Evil, Adam was less than forthcoming in accepting responsibility. Instead he shifted the blame to Eve, and when God turned to Eve, she, too, tried to pass the buck to the serpent. (The poor serpent had no one left to blame.) So we should not be surprised at how reluctant most people are to acknowledge their responsibility and to say they are sorry. We are behaving true to our ancestors when we blame everyone and everything except ourselves. It is the everyday heroic act that says, “It’s my fault. I’m sorry.” But without these simple words, forgiveness is much more difficult.

Forgiving and being reconciled to our enemies or our loved ones are not about pretending that things are other than they are. It is not about patting one another on the back and turning a blind eye to the wrong. True reconciliation exposes the awfulness, the abuse, the pain, the hurt, the truth. It could even sometimes make things worse. It is a risky undertaking, but in the end it is worthwhile, because in the end only an honest confrontation with reality can bring real healing. Superficial reconciliation can bring only superficial healing.

If the wrongdoer has come to the point of realizing his wrong, then one hopes there will be contrition, or at least some remorse or sorrow. This should lead him to confess the wrong he has done and ask for forgiveness. It obviously requires a fair measure of humility. But what happens when such contrition or confession is lacking? Must the victim be dependent on these before she can forgive? There is no question that such a confession is a very great help to the one who wants to forgive, but it is not absolutely indispensable. If the victim could forgive only when the culprit confessed, then the victim would be locked into the culprit’s whim, locked into victimhood, no matter her own attitude or intention. That would be palpably unjust.

In the act of forgiveness, we are declaring our faith in the future of a relationship and in the capacity of the wrongdoer to change. We are welcoming a chance to make a new beginning. Because we are not infallible, because we will hurt especially the ones we love by some wrong, we will always need a process of forgiveness and reconciliation to deal with those unfortunate yet all too human breaches in relationships. They are an inescapable characteristic of the human condition.

We have had a jurisprudence, a penology in Africa that was not retributive but restorative. Traditionally, when people quarreled, the main intention was not to punish the miscreant but to restore good relations. This was the animating principle of our Truth and Reconciliation Commission. For Africa is concerned, or has traditionally been concerned, about the wholeness of relationships. That is something we need in this world—a world that is polarized, a world that is fragmented, a world that destroys people. It is also something we need in our families and friendships. For retribution wounds and divides us from one another. Only restoration can heal us and make us whole. And only forgiveness enables us to restore trust and compassion to our relationships. If peace is our goal, there can be no future without forgiveness.