This summer, I enrolled in—and stuck with—an intensive two-month diet and fitness program. I’ve been a healthy eater and regular exerciser for many years, but in June I found myself performing bench presses, drinking protein shakes, and swearing off carbs (except on Sundays).

Was it a coincidence that I was in Bali at the time, surrounded by vegan cafés, abundant vegetable juice, and belly-baring yoga enthusiasts?

When making New Year’s resolutions, we often imagine that success will require great feats of self-control. But we tend to forget the other half of the equation: not just the willpower within us but the environment around us. The spaces and situations we find ourselves in can keep us on the path to achievement, or nudge us toward failure. 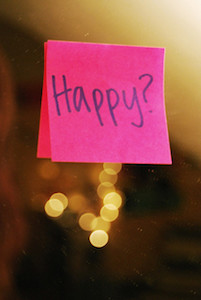 People high in self-control intuitively seem to know this. According to a 2015 study out of Florida State University, participants with lots of willpower—the ones who said they have “iron self-discipline” and resist things that are bad for them—also take more steps to minimize the temptation they encounter in daily life. Even though their self-control is strong, they are the ones who put their smartphones away when working, leave the credit cards at home, and keep junk food out of the house.

This study extends an earlier finding: that people high in self-control spend less time resisting impulses on a daily basis. Contrary to the popular view, the strong-willed are not the ones who constantly stare down bowls of Snickers without caving. Sometimes, they steer clear of the candy bowl altogether, because they know how strong the allure is.

As we put our 2016 resolutions into practice, then, we should take a page from their book and try to avoid tempting situations instead of just relying on willpower. “Resisting temptation is the salient moment of struggle. That’s when you feel it. If you can avoid temptation, it will not even occur to you: success without effort,” explains professor Roy Baumeister, a coauthor of the 2015 study.

That works if our resolution involves avoiding French fries or not yelling; but what if we want to perform some positive behavior, such as keeping a gratitude journal or exercising more? The same logic applies: We can use willpower—the strength to choose journaling over TV or rise at 6 AM for a weightlifting session—but we shouldn’t forget about our environment.

The power of reminders

According to a 2002 study on New Year’s resolutions, compared to people who failed, successful resolvers were more likely to use a technique called “stimulus control”: keeping things around to remind them of their goals. I recently took up knitting, for example, and initially stored my knitting needles and wool in a cabinet, tucked out of sight. After forgetting to knit for several days, I started placing one needle on top of my nightstand—perhaps not the tidiest solution, but an effective one. Some weekend afternoons, pondering what to do, my eyes fell upon the pink plastic needle and I spent the next hour happily clicking away.

In a 1989 study, researchers followed up with New Year’s resolvers seven times in a two-year period and asked which techniques they were using to keep their resolutions (and whether they were succeeding). Among 13 different strategies, including the exercise of willpower, keeping physical reminders around was the only one linked to success at every single stage. Participants who broke their resolutions cited the lack of physical reminders as one of their biggest pitfalls.

This might be why Happier, a gratitude app company, gives out free bracelets to users. Every time you notice the bracelet, you’re reminded to be grateful—and that shock of electric orange is hard to miss. Jess, a Science of Happiness student, keeps her gratitude journal out in the open to keep gratefulness top of mind; Cholena, another student, remembers to be grateful each time she passes by beautiful trees during her commute.

The right environmental cues can even influence our behavior without us realizing it. In one study, participants who ate a crumbly cookie were three times more likely to clean up after themselves when the air smelled of citrus cleanser; in another, participants playing an investment game were more aggressive when a briefcase sat on their table instead of a backpack. The signals all around us—the art on our walls, the stores we pass by on the way to work—may be covertly influencing our behavior. Cues like locations and people can trigger habits that feel automatic.

This doesn’t mean we’re slaves to the vagaries of our surroundings; willpower, values, and morality come into play, too. But it does mean that external forces play a vital role. As you map out your 2016 goals, consider constructing a supportive environment as your scaffolding:

When we succeed or fail at our resolutions, the impulse is to blame our steely willpower (or lack thereof). I didn’t even make the connection between health-conscious Bali and my fitness bootcamp success until writing this article; I, a New Year’s resolution junkie fueled by the heady momentum of January 1, have never put my goals on a calendar!

Our external environment may seem unimportant, and perhaps that’s why we rarely pay attention to it—and fail to see its subtle, pervasive impact on our most cherished goals.