With the end of 2018 fast approaching, soon many of us will embark on the annual tradition of making New Year’s resolutions. And one of the most popular resolutions—and seemingly hardest to achieve—is to eat healthier. 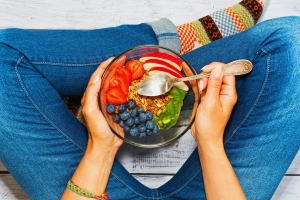 If this is your goal, new research in the Journal of Experimental Social Psychology has discovered a resource that could help you achieve it, and it’s not the latest diet fad. Instead, it’s an emotion: gratitude.

In the study, researchers split up 1,017 ninth- and tenth-grade students into four groups. Each group spent five minutes per week, over the course of a month, writing a letter on one of the following topics (the same topic week after week):

Participants were also instructed to spend 30 minutes per week improving themselves in the area associated with their writing prompt—health, academics, kindness, or organization. To further evoke the feeling of gratitude, the gratitude groups read gratitude testimonials and completed two additional gratitude writing prompts.

At the beginning of the experiment, the end of the month, and three months later, the students reported on their eating behaviors. For example, they indicated how much fruit, vegetables, fast food, and desserts they ate. At the end of each week, they also reported on their feelings: the extent to which they were feeling positive or negative emotions (like joy or worry) at that moment.

Ultimately, participants who wrote gratitude letters reported healthier eating habits at the end of the month compared to those who listed their daily activities. In fact, they had marginally better eating habits even three months after the conclusion of the study. Most notably, this was true for all the gratitude groups—not just the one who specifically focused on health.

Why does gratitude improve our food choices? The study further found that practicing gratitude led to decreased negative emotions, which consequently led to better eating behaviors. As many of us are aware, negative emotions—stress, boredom, sadness—can drive us straight to chocolate and junk food.

While gratitude alone probably won’t overhaul your eating habits, over time it can have a significant impact. As the study’s researchers explain, “The effect of gratitude on healthy eating, though small, is particularly striking when considering that small changes in diet among youth may aggregate across an individual’s lifespan.”

In other words, developing a regular gratitude practice can bring about small, positive, and cumulative changes to your eating behaviors that benefit your health for decades to come.

So, is gratitude a miracle drug? Not quite, but research abounds on its benefits. The verdict is that gratitude packs a powerful punch, not just for our minds but also for our bodies. It promotes stronger immune systems, lower blood pressure, and better sleep, just to name a few things. Now, we can also add healthier eating to the list.

Much of the popular guidance on healthy eating is focused on individual behavior—eat this not that, do this not that, keep yourself motivated. But it turns out that taking the focus off of ourselves and focusing on others through gratitude is an effective complement to our healthy eating regime.