After climbing a tree in the middle of the Yukon forest, I looked into a squirrel’s nest and found a pup that clearly did not belong there. It was older and larger than the others in the litter. My research team and I collected DNA from the whole litter and later, back at the genetics laboratory, the mystery was solved: We determined that the larger pup had been adopted by an older sister after its mother had been killed by a predator.

Altruistic behaviors can take on many forms, even among non-human animals. For example, they may warn neighbors of nearby predators or quell a dispute between two individuals fighting one another. But perhaps the most altruistic behavior of all is to care for an orphaned offspring as though it were one of your own. 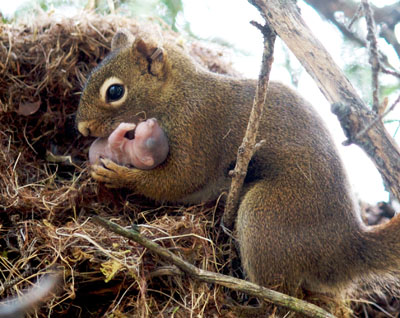 I am by no means the first researcher to discover a case of adoption in the wild. It has been observed in over 60 different species of mammals, from mice to elephants to whales. Nevertheless, adoptions in the wild are quite rare. What can explain these seemingly altruistic acts?

Animal behaviorists have been trying to understand the motivation behind altruism for decades, with little success. Some suggest that acts of kindness do not square with our Darwinian view of natural selection. Others argue that animals are simply compassionate creatures, willing to help others even while incurring a cost to themselves.

Darwin’s law of natural selection, however, states that only the individuals who are most fit for their environment pass on their genes to the next generation. The “evolutionary game” is to increase copies of your genes at the expense of those of other individuals.

My own research on North American red squirrels, a species known to be non-social, has shown that adoption can indeed be explained by Darwinian evolution. My findings challenge rather simplistic notions of animals as being either “selfish” or “altruistic.” Instead, our research suggests that selfish and selfless behaviors are often deeply, perhaps paradoxically, intertwined.

My colleagues and I have found that red squirrels do not treat all orphaned young equally. In fact, we found that red squirrels never adopt unrelated orphans but do adopt related orphans as long as they are related closely enough for the benefits of adoption to outweigh the costs. Relatives share a portion of their genes; the more closely related they are, the higher the proportion of genes shared. Adopting a relative means the surrogate female is helping to pass on the genes she has in common with her relative.

But there’s a catch: While females adopt relatives to increase the copies of their genes, adding additional young may reduce the rest of the litter’s odds for survival. Indeed, we discovered that surrogate females do in fact become more selective when they have more mouths to feed. That is, as her litter size increases, she requires that orphans be a closer relative to her before she’ll adopt them.

Females, then, are forced to calculate the costs and benefits of adoption in a sophisticated way: They only adopt when the proportion of shared genes is high enough to make up for lowering the odds for survival of their young.

This suggests that what looks like altruistic behavior at first glance may not in fact be purely altruistic. If squirrels simply adopt to “be nice,” why do they not adopt unrelated orphans? By adopting only orphans related to themselves, red squirrels force us to consider that perhaps being nice may simply be a selfish means to increase one’s genetic fitness. Essentially, you can pass on your genes by having young of your own or by helping your relatives raise their young.

What about humans? Adopting children is popular in our culture and the majority of adoptions are between unrelated individuals.

Our human ancestors lived in small clans, where adoptions were most likely to have occurred between related individuals. Human nature is defined by our complex social interactions and strong emotional bonds.

Today, most couples who adopt children do so for a multitude of reasons. However, what motivates us to adopt an unfamiliar child remains unclear. Are we altruistically trying to offer another human being different opportunities in life, or are we selfishly filling an instinctual need to raise a child? Do we feel good about ourselves simply by knowing we helped someone in need or because we are seen as generous by others?

I would wager that adoptive parents maintain that they adopted in order to improve their child’s welfare. But how do we separate feelings of pride in our children from pride in ourselves for raising wonderful children? Perhaps we are simply programmed to pass on our genes by raising children and doing so gives us feelings of joy. Indeed, these feelings of joy might be essential to motivating us to become parents and sustain our species.

This does not suggest that compassion and altruism are an illusion. But it does suggest that they arise for complicated reasons. Ultimately, the underlining motivation of these behaviors, and the reasons for their persistence, may be due to a mixture of selfish and altruistic tendencies—tendencies that ensure the survival of our genes.

You state that adoption has been observed in over 60 species of mammals in the wild. Do you think it is reasonable to extrapolate your findings among red squirrels - which you concede are not particularly sociable - to all these other species? (And thence to homo sapiens himself?)

Are troops of monkeys or pods of whales, to take just two examples, more or less likely to adopt, or exhibit any other behaviors that bespeak apparently counter-Darwinian behavior? I doubt that enough work has been done to say.

I am sure that, whatever the observed behavior, motivations will remain rather murky. But there is something terribly reductionist, and rather depressing, about the conclusion that altruism can ultimately be explained by an essentially cold calculus of genetic survival.

Really interesting research. I do think that despite the struggles to get evolution taught in mainstream America, we have made progress in furthering our understanding of Darwin’s theory, and its needed revisions. Natural selection as the end-all-be-all of the biosphere has been all but debunked by the Gaia hypothesis. As Dr, Margulis argues, biota responds to its natural surroundings, which in turn changes in response to them. It is not always the partiarchal arms race that we humans make it out to be.

To argue that the squirrels are being “altruistic” strikes me as assigning an emotion to them that has been traditionally assigned to human life. I would think that individual hormones and simple desire to protect the young could certainly override blind Darwinism, especially when a species is clearly thriving.

Emmy-for humans some people could argue that
the need to protect the young would be the sole
motivator especially because we adopt those who
aren’t relatives. Except over 60 other species of
mammal adopt so it is reasonable to assume that
humans, because we are so social, would adopt not
due to our compassion for the young but for our
need to survive as a species.  If it was only to
protect the young then mammals like the squirrels
would adopt non-kin as well.

An alternate hypothesis to look at is that adoption
serves in regards to reciprocal altruism.  As in, if I
protect your offspring then if I die you protect my
offspring.  Groups who do this would be much more
likely to survive.  In fact human adoption could be
explained by this.  Since our social groups are so
much bigger (countries instead of small tribes) we
see more people as part of our group and as a
result are driven to adopt others because our brain
is telling us that they will help our offspring.  This
obviously doesn’t apply to couples who can’t have
children.
All in all this is an interesting article it would be
nice to know if adoption in other species was
similar to that of the squirrels.

May I offer another perspective on altruistic
behavior? Rather than considering altruism solely as
an evolutionary pro-survival trait, have you
considered such behavior as a neuro-chemically
induced response?  It seems likely that hormones
such as oxytocin, which moderate individual
behavior, might also be particularly active factors
in the behavior you describe.
Perhaps another aspect of social reciprocity is
learned behavior. For years, squirrels have been
bringing me stones in exchange for walnuts,
carefully laying the stones before me, then
accepting the nuts. Apparently, some individuals
have found that a food source is present for longer
periods if a stone is brought.

Wow Cheryl, that’s so very fascinating that certain
squirrels have brought you stones in exchange for
walnuts! I feel very strongly that animals are much
more intelligent than we egotistic humans believe
them.