I think the worst feeling I ever have as a parent is when I see my children suffer. I know this is true for my mother, too: she never could stand to see me in any sort of pain. I saw this again last week, when I had my tonsils taken out; I wish the surgeon could have prescribed some narcotics for my mom, who was in almost as much pain as I was, and just at the sight of MY pain.

When kids' hurt, we parents feel it. This is perhaps even more true for kids' social and emotional pains than for their physical ones. 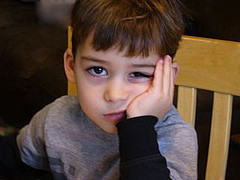 We naturally want to protect kids from pain and difficulty, but when we do this we deprive them of the challenges that will help them grow intellectually and emotionally. In my own research I found that happiness can actually come out of difficulty, not just in spite of it. The only thing that the low-income kids in my study had that brought them happiness that the rich kids didn't have was challenge. Having adequate challenges in their lives tended to lead to greater happiness among adolescents; while the most advantaged teens in the study had many more of the other factors that led to happiness, they tended not to feel adequately challenged.

I don't think our generation of parents has embraced the notion that it is okay for our kids to experience difficulty, especially when it comes in the form of pain and sadness. We want to step in and solve their problems at school and with their friends. Uber-involved parents talk to principals to ensure that our children are properly understood and supported; we "help" with homework to an extreme; we orchestrate playdates that manipulate who our children's friends are, and how those friendships are carried out.

This has had a measurable effect on our kids' generation: compared to people raised in the 1960s, kids today perceive their lack of control. Jean Twenge, a psychologist and the author of Generation Me, has shown that young Americans increasingly believe that their lives are controlled by outside forces rather than their own efforts.

Ironically (from the viewpoint of parents trying to rig their kids for success), Twenge finds the implications of this belief are "almost uniformly negative:" they are connected to poor school performance, helplessness, ineffective stress management, decreased self-control, and depression. We might be preventing pain and protecting their innocence, but we are also depriving our children of the chance to know what they are made of, to learn to cope with life's inevitable difficulties and sadnesses, to develop their grit.

And it turns out that grit—this is the term researchers use when measuring stick-to-it-ness in the face of difficulty—is an important predictor of success. Want your kid to succeed in school? In a large study of college students, task-commitment—the perseverance, endurance, and hard work that make a person "gritty"—turned out to be the most important factor in predicting success in many different arenas, including science, art, sports, and communications. Grit was more important than SAT scores, high school rank, and high school extracurricular involvement.

Grit is also a core component of life-long happiness: when kids learn that they can't cope with life's difficulties—both because mom or dad always seem so hell-bent on making sure that they never occur, and because mom and dad are always solving kids' problems—they come to fear challenge. Mistakes become something to be avoided at all costs. This can create perfectionistic tendencies that are a particular form of unhappiness.

Although we can put a great deal of care and thought into creating the best possible lives that we can for our kids, they are still, gosh darn it, going to face pain and difficulty. Even so—or perhaps because they are allowed to face their own challenges—their lives can be happy. Maybe even wildly happy.

I appreciate the point you are making and recently a friend shared a story about a butterfly that crystalized this lesson of pain for me as a gentle reminder.
When a catapillar goes into its cacoon it seems it will never come out of the tight knit bed alive.  Often children what to break the cacoon open to let them out.  When the cacoon is opened, the catapillar dies.  But when the cacoon stays intact, the struggle is emense and then the fully formed butterfly emerges in all its beauty.  For me it is a wonderful visual of the wise lesson you are sharing with us.
Hope you are feeling better from your surgery and can sing http://greatergood.berkeley.edu/half_full/wp-includes/images/smilies/icon_smile.gif
Peace, MJ

Christine, this is an excellent post! I am from India and I am noticing this issue is happening a lot more in this generation (similar to the 1960s divide in the U.S you mentioned in the post). I have always been debating with my friends on the importance of “pain” our parents exposed to us which many are not doing to their kids.

I really enjoyed this post and the one recently about play.  I tried to Stumble both of them, but they both returned errors.

Sigh, I think my kids lack grit.  Besides allowing them to face challenges, what other things can parents do to encourage grittiness http://greatergood.berkeley.edu/half_full/wp-includes/images/smilies/icon_smile.gif

I’ve been hearing that PTSD is more prevalent in young people than ever before, and wondering whether it’s being recognized and reported more, whether life is more stressful now, or whether kids today are being raised to be “less gritty.” I think it’s probably all of the above, and this blog helps explain one of those pieces.
I always felt guilty that my daughter was a latchkey kid and had to handle some problems herself when I was at work. Today she’s an energetic, positive, gritty young woman, a creative problem solver, and a terrific mom. All a great relief to me, of course. And this could explain the science behind her success!

Great post! However, I think this is only showing one side of the picture. Where my parents overprotected me, my wife’s parents absolutely neglected her. They didn’t care if she went to school or did her homework (and that’s just one example). She seems to be bearing similar consequences in lack of confidence today, as those evidenced in adult children who had their parents do everything for them. I would like to hear more about this side of the issue (though it’s probably not as relevant to parents who care enough to read these articles).

I have been reading these emails for a few months now and this one got me!  I love hearing other peoples situations and views since i am a young mom with few friends going through what I am going through with a 5 year old boy.  Just a few weeks ago he started school.  I sit on the playground before school with him so he can play with his friends.  Two older boys joined in and were picking on my son.  It took everything in me to not go over and give them a piece of my mind but i stayed back and let my son deal with it.  It was great to watch him figure a way out if the situation and he was fine.  It killed me but showed me my son could do it and was a great learning experience for me.  This was just what I needed today as usual and i just wanted to say thank you for all the effort you put into these emails.  They help me more than you could imagine!

oh good we don’t have to fix it all or make life perfect – what a relief http://greatergood.berkeley.edu/half_full/wp-includes/images/smilies/icon_smile.gif

Thank you for this post, it is very helpful.  I would love to get more information about how to help our children develop “grit.”
——-