Hearing your young child spontaneously say a heartfelt “thank you” can turn a horrible day into a good one. But the opposite is sometimes also true: Seeing your child not show a shred of gratitude—or, perhaps worse, assume that they should be showered with endless toys or gifts—can send you on an emotional tailspin wondering what you did (or failed to do) as a parent that led to this point. 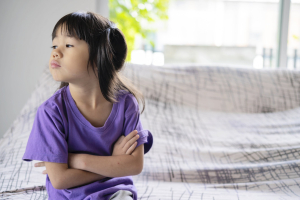 Numerous studies have highlighted the benefits of gratitude, and there are science-backed ways that parents can nurture an attitude of gratitude in their kids. But because gratitude takes practice, it’s reasonable to expect that kids will miss the mark a lot of times, too, and act in ways that might appear thankless to those around them.

So, in those moments when kids miss opportunities to be grateful, what type of parenting strategies can we use that might lead kids to be more grateful later? A recent study explored this question.

Researcher Andrea Hussong and her colleagues studied over 100 parents and their children—who were mostly European American and from middle- to upper-middle-income families—first when they were between six and nine years old and again three years later.

The researchers presented parents with 15 different fictional scenarios of children missing opportunities to show gratitude that are common among first to third graders. There were four types of scenarios: (1) failing to express thanks, like when children don’t say thank you when parents buy them toys; (2) assumption or egocentrism, like when children drop their backpacks in the middle of the hallway without thinking who might have to pick them up or walk around them; (3) strong desire, like when children throw a tantrum in a store when parents won’t buy toys they want; and (4) social comparison and feelings of relative deprivation, like when kids tell parents that other kids have more toys than them.

Parents rated how inclined they would be to use six different types of responses for each of the fictional scenarios:

At both the start of the study and three years later, parents and children were asked to complete a questionnaire about how often children showed daily moments of gratitude, like noticing they’ve been given a gift, showing positive feelings in response to being given a gift, showing that they’re thinking about the gift-giver’s positive intentions, and doing something that shows their gratitude. They also completed questionnaires about how often children felt sad, unhappy, hopeless, down, or worried.

Researchers also measured characteristics about parents that could influence their parenting around children’s gratitude, like their own gratitude, positivity, and sensitivity toward their children.

Compared to younger children, parents of older children tended to have more self-blame and let-it-be responses. What’s more, parents were more likely to respond with instructing their sons compared to their daughters. Parents who themselves were more grateful or positive tended to respond more frequently with instructing their children, and the more positive parents also tended to respond with less self-blaming and giving in. Parents who were more sensitive tended to feel less distress and impose less punishment, and more often let it be.

The best ways to foster gratitude

Which type of response seemed to matter more for children’s gratitude three years later? It depends on who you ask.

For parents, they reported that their kids tended to show more gratitude (and also more negative feelings like sadness, worry, and hopelessness) the more they tended to respond to their kids’ ingratitude with negative consequences, like taking away dessert or imposing cleanup chores.

For kids, they tended to report showing more gratitude the more their parents got upset or frustrated by their ingratitude.

“It may well be that parents’ punishing behaviors accomplish greater compliance in the behavior of gratitude . . . but have little impact on the actual experience of gratitude,” explain Hussong and her colleagues.

In other words, children may learn not to loudly and unrelentingly ask during dinner for a new video game that all their friends at school are playing because their parents might take away their iPad. But they might still feel just as deprived privately and not notice all the video games and toys that they already do have.

What’s more, children pay attention to when their parents’ emotions prominently shift, which sets expectations and cues them to learn important lessons. When parents express their authentic emotions around their children’s missed opportunities to express gratitude—like by saying, “I feel frustrated that you assume that I’ll pick up after you” or “I feel upset that you don’t appreciate the food and the effort I’ve put into making this meal”—it can heighten children’s awareness of their family’s values and prompt them to reflect more deeply on the emotional context of the situation.

As Hussong and her colleagues explain, it’s important to reinforce positive social behaviors like gratitude when children do display them—but also to pay attention to how we respond when they don’t.