Transformation. Teachers want to make it happen in the classroom. Parents often seek it for their children. World leaders dream of leaving it as their legacy.

For years I have studied how we can bring about transformation in young people—specifically, the type of transformation that prepares them to become leaders in their schools, communities, and beyond. I've identified some key factors in transforming people into leaders—factors that might be just as important among adults as among youth. 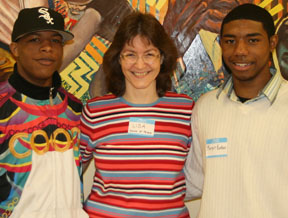 Lisa Calderone-Stewart (center) with two graduates of her program, Ryan (left) and Marquis.

In a 2002 study, I asked teenagers in a Milwaukee-based leadership training project about what evokes in them a desire to lead. They mostly spoke of five principles—the same five that, in other studies, CEOs and teachers have identified as key to exemplary corporate leadership and learning communities, respectively. In fact, I realized I had used those same five as both a coach and a parent.

Those five principles are:

(1) Shared LEADERSHIP, from top and bottom:

(2) Diversity and creativity in LEARNING:

Diverse ideas and perspectives challenge people to think more deeply and learn more fully. Because this is sometimes threatening, many people end up hiring a staff of people who think alike and sometimes even look alike. Diversity often brings on conflict, but that conflict often demands re-thinking and leads to the best ideas and solutions.

(3) REFLECTION on goals to face the same direction:

Sometimes, everyone tugs the group toward different goals because of different agendas and unexpressed assumptions. Reflection and honest communication can get everyone on the same page so the trust level increases, and people go the extra mile to accomplish their shared purpose.

(4) SERVICE by walking the talk:

A group needs integrity. Everyone needs to hold each other accountable. When the members of a group don't practice what they preach, it hurts everyone. Integrity means you live out your values and you serve the world by making it a better place—when no one is looking, and when everyone is looking.

Teens are willing to take responsibility when they get the "stuff" they need. Physical stuff, like tools, supplies, and a physical space in which to work. Emotional stuff, like support, affirmation, and care. In fact, they need support from two sources: from a skilled mentor who will call them forward and give them direction, as well as from peers who will share the experience and provide balance and perspective.

Further research on these areas revealed a remarkable pattern: learning, reflection, leadership and service/action appear to be mutually dependent on each other; furthermore, they occur together in a predictable cycle. In fact, practitioners in each of the four fields use similar processes that include phases of the others in the same order (service/action, learning, reflection and leadership). Importantly, they all require support in order to be successful.

I can illustrate this process with a personal story.

Years ago, our family served meals at a local soup kitchen. The first time we went, our son was reluctant and remained at the stove, with obvious anger and resentment—until he noticed a boy he knew from school standing in the line. Suddenly his mood changed. "The Poor" had a name and a familiar face! His anger vanished, and he became curious. Seeing his friend grabbed his attention. (This was the Service/Action phase.)

In the car all the way home, he bombarded us with questions: How can my friend be poor? Where do his parents work? Where do they live? Why don't they have enough money for food? We did our best to explain about minimum wage, cost of living, the economy, and a lack of affordable housing. This conversation began his learning experience. He was taking in new information, doing a deeper exploration of the situation. (This was the Learning phase.)

Back at home, he became very quiet. He turned off a TV program about world poverty and stomped up to his room, mumbling, "Don't they know we have poor people living right here?" He disappeared for the rest of the day. It was difficult to digest everything. He was struggling, reflecting, letting things settle. He was starting to try to apply his new knowledge to life. (This was the Reflection phase.)

He finally decided to return to the soup kitchen, to share a meal with the people there, and to listen to the stories of their lives. He even invited two of his friends to come. He emerged with his action plan of what to do next. (This was the Leadership phase.) He was ready to be sent back to service, obviously open to another cycle of Learning, Reflection, and Leadership.

In the circular graphic below, the presence of Support is represented by the arrows that guide the movement from one quadrant to the next. In my son's story, I was the supportive, challenging mentor. Imagine if I had said, "Don't worry about it. Let's go get some ice cream." The story might have ended there. But I was willing to pull him forward by giving him new information to consider. He also had two friends willing to go to the soup kitchen with him.

Drawing on my research, I have created a model for Transformational Living (also called Transformational Ministry), which serves as the basis for Tomorrow's Present, a youth leadership training program I run in Milwaukee, supported by House of Peace and The Leadership Center of Cardinal Stritch University.

Among our programs is a youth forum we host every November called "Pebbles of Peace outweighing Boulders of Violence," which provides another example of this cycle of transformation. At the forum, we gather 100-150 high school students from public schools and secular organizations. The day starts with skits, then they learn new skills and new concepts in mixed groups; after that, they meet with local community leaders for lunch, discussing issues, contributing factors to violence, and possible solutions. During the afternoon, they meet with their "home groups"—fellow students from their own community—and plan a project to address an issue of interest. Representatives from each group return in April, and we invite the public to see presentations of their accomplishments and hear about their learning.

The opening, of skits and movie clips, is a way to call them to action. Next comes the learning, the content of the day. They are asked to reflect and discuss their insights with community leaders, and finally, when they start planning their home project, they are exercising leadership skills. Once they start putting their plan into action, they will return to service/action, and the cycle will begin anew.

As in my son's story, what really moves this transformatoin along is the support they receive—from both the skilled adult mentors who find ways to reinforce the learning and continue the transformation process, as well as the positive peers who share experiences and enjoy using their new skills and knowledge.

In addition to "Pebbles," at Tomorrow's Present we offer other programs that encourage young people to learn, reflect, lead, and serve with support.

Several times a year, we hold Interfaith Youth Cafés. Young people from different congregations dialogue around a particular theme. In mixed groups, they hear about the traditions of the various religions as well as the spiritual journeys of individual young people.

We have also created resources with a variety of outside partners. The "Lil Johnnie Literacy Program" is a non-traditional curriculum for high school students, which has been especially successful with reluctant readers.

In all of our programming, young people are given leadership roles, in partnership with adults. They become both learners and teachers, they reflect and apply their learning, and find ways to bring it home and put it into action. Then they return and the cycle begins again. The more often young people attend our training events, the better they become at all of the essential skills of leadership, service, learning, reflection and finding/giving support.

Sixteen "House of Peace Teen Leaders" serve as table leaders at "Pebbles." We usually graduate four seniors every year and take in four first-year students. Since 2001, all of our Teen Leaders except for one have gone on to college. Many of them are the first in their family to do so.

We have discovered that there is no need to wait for the future. Tomorrow is Present already… because our young people are indeed Tomorrow's Present to us.

I love this post!  I particularly appreciate the idea of a cycle, that developing leadership skills is an ongoing process.  I think we so often have the idea that leaders are born and not made that we do not find ways to cultivate positive leadership among our youth.  Thank you!
——-