Every year, Avon, the cosmetics company, puts on a walkathon to help raise money for breast cancer research. The company raises a lot of money and it goes to a good cause. Sounds like a positive, feel good thing, right?

Wrong, according to a new book by Mara Einstein, Compassion, Inc.: How Corporate America Blurs the Line between What We Buy, Who We Are, and Those We Help. 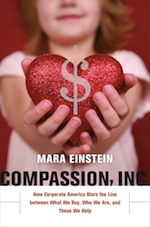 Einstein, an associated professor of media studies at Queens College, has investigated the corporate practice of sponsoring charitable causes and come up with some troubling findings. Many large corporations invest in raising money for charitable causes not because of inherent interest in philanthropy, per se, but because they hope to gain valuable marketing exposure for their products. And we, as participants in these fundraising campaigns, are being duped in the process.

Although Einstein admits corporate charity can benefit social causes, and she gives some examples of this, there’s often a twist to their giving. For example, Proctor and Gamble’s ran a popular promotion some years back claiming that for every bottle of Dawn dishwashing liquid purchased they would donate $1 toward saving wildlife. But, if you read the fine print, you discovered that after reaching their targeted goal, Dawn stopped donating the dollar even though they continued to keep the claim on their label and reap the benefits of their do-good image.

Often people who buy a product claiming to give to charity—or who participate in corporation-sponsored charity events—don’t realize how much these campaigns benefit the corporations rather than the causes, primarily through free advertising.

In addition, cause-related marketing campaigns obscure the fact that the sponsoring corporations may be doing harm to society. Einstein uncovered that many of Avon’s beauty line products contain carcinogens that may contribute to cancer rates in women in the first place. And, of course, dishwashing liquid is polluting our oceans and streams, not to mention the impact of their plastic bottles on the environment.

The good news in all of this is that people are, more and more, realizing the impact of their spending and concerned about doing the right thing. They want to help and to put their dollars to good use, in part because of the many psychological and even physical benefits associated with giving. Corporations, aware of this trend, would not be supporting causes like breast cancer or climate change if they didn’t realize their customers want to do good, writes Einstein.

But, even though buying products that give to causes may seem like a benign or even positive step—after all, one has to buy dish soap; one may as well make it Dawn—using shopping as the route to giving distances people from their felt compassion and from the social causes they support, while profiting the company.

It’s easy to think, “no harm no foul,” but Einstein writes that connecting consumerism with caring is a bad idea with hidden consequences. Often small local charities that do good work with low overhead can’t attract consumer sponsors, making it difficult for them to compete for needed funds. Plus, many of these big charity campaigns cost corporations a lot of advertising dollars, which would be better given directly to social causes rather than underwriting good press for the corporations themselves.

Worse is when corporations “brand” giving—such as in the (RED) campaign used by the Gap, Apple, Starbucks, and American Express, among others, to raise money for the Global Fund to fight AIDS and malaria in Africa. According to Einstein, it makes customers who buy these products feel cool or part of a larger network of giving—while obfuscating the complexity of the issues involved. AIDS and malaria are related to bigger problems, like poverty and pollution, which might be better protected through government legislation, not through the corporations, which directly or indirectly may even be exacerbating the problems.

As Greater Good has written about in the past, studies of heroism show that it is harder to turn away from injustice when you meet face to face with someone who is harmed by it.

Philanthropy through consumerism takes us further away from the suffering of others, making it more difficult to be in touch with our compassionate natures. When we benefit by buying a product, it robs us of the satisfaction of truly giving to another person. It also inures us to the suffering of others, argues Einstein, making us feel we are doing good when, in fact, we are shopping.

Einstein suggests that we, as consumers, become more savvy when deciding whether or not to buy a product that claims to support charity by asking questions first, such as, “Does the [corporation’s] product serve the social good? Can it be produced more sustainably? Has the company been transparent about the promotion?” If the answers are no, yes, and no, probably the corporation’s primary concern is using philanthropy as a marketing tool, and their giving should be suspect.

And shouldn’t we try anyway to move away from corporations taking on the role of society’s benefactor when they so often have mixed intentions? Wouldn’t it be better to help them address society’s ills through reasonable taxation, with distribution subject to a democratic process?

At the end of her book, Einstein mentions the policies of the small country of Bhutan, arguably one of the happiest countries on earth, where they measure the success of economic policies by their Gross National Happiness rather than by the Gross National Product. She writes, “Bhutan is also a country that has no advertising. Coincidence? I don’t think so.”

Einstein raises an interesting point. Perhaps if we weren’t lured by corporate charity campaigns and didn’t delegate our giving to others, we would be more connected to our giving…and a whole lot happier as a nation.

Isnt corporate charity more about raising the brand value than actually doing good? I mean there is a motive behind doing something and thats 99% of the time is selfish.

This is, indeed, the point that Einstein makes in her
book. However, to be fair, there are some
corporations - at least according to Einstein - who do
give to charity without seeking advertising exposure
for their good deeds, suggesting altruistic motives. I
don’t have statistics for how often that happens; but
you could be right…it may be rare.

It is important not to allow to allow the perfect to be the enemy of the good.  From my personal perspective perfection is an illusion and it is most often necessary to make difficult choices from a number of imperfect alternatives.

We live in a capitalistic, consumeristic society and recognizing that reality means that we need to be “savvy” about how and where we spend our dollars, particularly in charitable giving.  That means greater individual education about which charities are being sponsored, the amount of money that actually goes to the charity, the amount of money the particular charity spends on “administrative costs” as opposed to actual service and a myriad of other issues.

As with many other issues, this is another particularly complex matter that is not susceptible to any simplest rules.

All that having been said, I still prefer to purchase the products of a company that does “give” as opposed to one I know does not or that “gives” to organizations that I find problematic.

Thank you for these comments. I think you put the
nail on the head when you mention that we need
to be savvy here, do our homework, and not trust
others - including large corporations - to make
these decisions for us.

I would also argue that delegating our own
charitable giving to large corporate campaigns
takes something away from the act of giving,
depriving us of some of its benefits to our own
personal happiness and health and our connection
to others in our communities.

It’s not there is no such thing as corporate caring.
There are corporations who take very good care of
their workers, provide benefits to their community,
and use ethical business practices. This is a great
way to engage in altruism. though it’s less flashy
than some other forms of charity (and may not
produce good advertising for the corporation).

The beauty of Einstein’s book is in pointing out
some of the cost/benefits of corporate giving. Of
course, the world is not perfect; but I think we do
need to take heed that something which seems
innocuous may not be entirely so.

Thank you for an intelligent article. The interests of the corporations - you know, Mitt Romney’s very special people - are not synonymous with the interests of “we the people.” They have been manipulating our minds from shortly after birth; we have no hope of attaining intellectual or material freedom without first understanding and then breaking their grip over our state and society.

The argument made by Joel, above, about an insistence on perfection being an obstacle to real-world progress is a classic device to bring people into line with the corporate status quo. This is strikingly reminiscent of Democratic Party hacks who urge genuine progressives to support Barack Obama - a man who has governed like a Republican in so many ways - on the grounds that he is better than the alternative. If we insist on perfection, they say, we enable its opposite. To allow ourselves to be manipulated in this way is to cede our power to choose to powerful external actors - be that political parties or the corporations they represent. (That’s right: both parties represent the corporations. One does it overtly; the other does it covertly.)

Jill is right to (politely) reject Joel’s perfection argument and remind us that we still have the power to think critically and act independently. If we lose sight of that, we’re done - and the corporations will own us completely.