(1) I had two separate conversations with new parents about how having a baby can be like a wrecking-ball to a marriage, especially in the first year.

(2) Three different people asked me what tips I’d give parents who want to raise empathetic children. 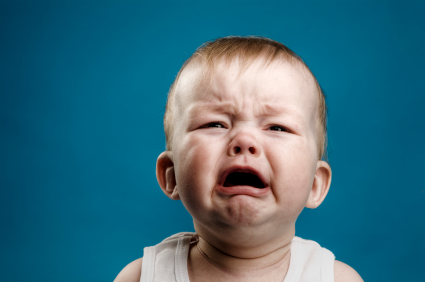 These conversations are related.

First of all, I want new parents everywhere to know that it is totally normal for that adorable bundle of joy to cause a tailspin in your marital satisfaction. An abundance of research shows that this happens to the VAST MAJORITY of couples: Statistics vary, but most studies indicate that 70 to 90 percent of couples report being less satisfied with their marriages after a baby is born.

Here’s the thing. Just because it is totally common for us to start feeling, say, hostile, toward our partner when junior comes home from the hospital, it doesn’t mean that those feelings are harmless—to the marriage OR to junior.

In fact, hostility between parents can seriously harm a newborn baby’s nervous system. When parents fight, baby doesn’t feel safe, and this is one of the most important things for proper emotional, intellectual, and even physical development. Far from being oblivious, pooping blobs, babies are highly attuned to the world around them. They may not understand what their parents are fighting about, but their nervous systems detect that something is wrong.

One important antidote to the decline in marital satisfaction is to get more sleep, but that is a different blog post.

Another important way to keep your marriage from self-destructing is to practice empathy with your partner. I love John Medina’s recommendation for how to develop an “Empathy Reflex,” which he describes in his book, Brain Rules for Baby (which, if you don’t have it already, you should run out and buy).

Here are Medina’s two steps for when your partner is looking at you with rage, disgust, or even just mild irritation.

1. Describe the emotions you think you are seeing in your partner. Say you go to work and your partner has been home, alone, all day, with baby. You come home, and he or she immediately unleashes on you for being late. Instead of pointing out that it is only 5:36 and you promised to be home by 5:30, say something like, “You look exhausted. And furious. You are clearly about to blow a gasket.”

2. Make a guess as to where those emotions are coming from. Continue: “You couldn’t have clocked more than three hours of sleep last night; you must be feeling unbelievably crappy because of that alone. And it doesn’t help that I got plenty of sleep, woke up, showered without interruption, and then jaunted off to the office, where I have engaging work, adults to talk to, and lunch in restaurants that don’t involve pureed peas which eventually land on my collar. I’m so sorry that I’m late, honey. I appreciate all you are doing right now.”

This is the companion technique to the one I describe in “How to Pick a Fight” where you express appreciation and an “I-statement” when you have a bone to pick with your beloved.

Developing Medina’s “empathy reflex” (along with the techniques I describe in this post) will reduce the hostility in your marriage. It will also have another important benefit: Practicing empathy with your partner will help you raise a compassionate child.

Children do what we do, not what we tell them to do. For example, if you have a child who tends to be defensive when she’s arguing with her siblings (as I do), it’s probably not going to be all that effective simply to say to her “don’t be defensive,” when she’s doing it.

It will be more effective to model other ways of reacting to conflict (namely, by accepting at least some responsibility when your co-parent or spouse accuses you of something).

So when you’re on the verge of a heated argument with your partner (or your children, if they are older), take a step back and make a real effort to understand where your partner’s coming from—what he or she is feeling, and why he or she might be feeling that way. Then, as carefully and sensitively as you can, try to convey this to your partner (I’m sure he or she will correct you if you are wrong).

You’re boosting the odds that your children will eventually develop this same reflex with their siblings and friends, with you, and, yes, maybe even with their future spouses. This “empathy reflex” is at the heart of compassion, because it primes us to both see other people’s suffering, and put ourselves in a position to help them.