This video—and Kelly’s column below—continues Kelly and my discussion about fostering engagement and high-performance in kids. (If you are reading this post in an email, click here to view the video.) Enjoy!

Kelly’s column is reprinted here with permission from The Bay Area News Group.

My daughter’s not big on trying new things. It’s particularly noticeable with her artwork. She’s currently in what will later be recalled as her great flora stage.

Even the faint footsteps of failure in the distance will cause her to flip over the page and go back to her old standby: daisies. Not trees, not bushes, not even tulips. Daisies. Wikipedia, the online encyclopedia, defines failure as "the state or condition of not meeting a desirable or intended objective." That's all, just a mark missed. Nothing so awful. Nothing to be ashamed of or chronically avoided.

I myself am on friendlier terms with failure, as we've known each other for so long now. I met her way before I shook hands with success. In fact, failure introduced me to success. Some of my standout failures were all eight years of French, which left me with as much fluency as any six-year-old walking out of "Ratatouille," high school field hockey, where I never could stop loosing giant divots from the field, and all cooking beyond pasta. Oh, and I bombed my SATs.

After a lifetime of making mistakes so often it feels like my resting state, I've come to feel utterly undeterred by the prospect of failing. This freeing condition was facilitated by my parents, who were able to communicate a thousand ways that they didn't care a whip about whether I made the team or got into a big name college. Their expectations were around things like respect—for teachers and coaches as well as teammates and myself—and what they called

The Eleventh Commandment—Thou Shalt Laugh At Thyself. The most pitiable person in our house was not the poor student or the third-string athlete but the one who couldn’t tell a joke or the truly besotted who couldn’t even get a joke.

Another upside to befriending failure early is that you develop a certain knack for the postmortem, a medical term used here to mean a time of examination and reflection. Failure analysis, as they call it in product development circles, is the process of collecting and analyzing all available data to find the cause of a failure and figure out how to prevent it from happening again. Is there a more useful skill, or a more capacitating one? Failure analysis, by its very nature, says failure is an event, not an identity and that future outcomes can and will be affected by our choices.

So, if failure’s so good for us, why aren’t we treating our children to more of it? Christine Carter, PhD, of The Greater Good Science Center, saw in her own research that kids who reported facing more challenges in their lives were far happier than the kids who reported fewer (or no) challenges. That means not only is failure critical to success but it’s also a cornerstone of happiness.

Challenge, in the elementary school context, could be anything from peeling that stubborn little sticker off an apple to fixing a princess crown to packing lunch. When I zip up my daughter’s sweatshirt or manage relations during her playdates or run her forgotten homework down to school, I am essentially covering her bet. She should lose sometimes, if only so she experiences for herself how sharp the initial sting is and then how quickly it subsides. An oddly carved pumpkin, illegible homework, a misapplied band-aid, I owe her these. Intervening—making things easier and more perfect—may inadvertently send the message that I think she needs my help, either because she is incapable in some way or because failing would be too traumatic.

As Christine said, “the thing we need to protect our kids from is not failure but a life void of failure.”

The first video in this series is The Psychology of Success. The second is Achievement Doesn’t Matter. The third teaches more about how to praise kids. This is the fourth video in the series. 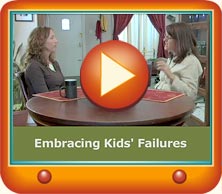