What motivates people to choose their career, to choose their mate, to treat other people in the way that they do? According to legendary psychologist Abraham Maslow, people are motivated by their needs. Indeed, most scholars of psychology recognize Maslow by his famous pyramid, termed the hierarchy of needs.

The base of Maslow's pyramid contains our most basic biological needs, while safety, love, and self-esteem form the next three levels, respectively. The textbook capstone of the pyramid is a desire for self-actualization, or self-fulfillment. Without meeting one's basic needs at the bottom, said Maslow, one cannot have those more evolved, uniquely human needs at the top. Thus self-actualization, according to Maslow's first model, is what all people ultimately strive toward—it's the purpose of life. 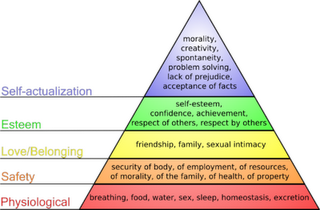 By renaming self-transcendence as the new capstone, Maslow revered the profound human capacity to "[go] beyond or above self-hood." The implication of Maslow's revision is eloquently stated in Koltko-Rivera's final analysis:

Indeed, according to Maslow's final theory, the purpose of life is not to perfect oneself, but to transcend oneself by connecting with others. This is a radical new understanding of one of the dominant theories in modern psychology.