There are a lot of great things about summertime, but for kids and adults alike I think the best part is all the potential downtime to just hang out and play.

Unless, of course, you are one of those people, as I sometimes am, that feels guilty not working all the time. Then downtime can be a little stressful. If that’s you, think of it this way: Play is actually productive. It makes us more creative. And for kids especially, the benefits social and emotional benefits are HUGE.

Kids today spend less time just playing than they did in previous generations, both indoors and out. All told, children have lost 8 hours per week of free, unstructured, and spontaneous play over the last two decades.

Researchers believe that this dramatic drop in unstructured play time is in part responsible for slowing kids’ cognitive and emotional development. Children’s capacity for self-regulation—their ability to control their emotions and behavior and to resist impulses—is much worse today than it was 60 years ago. In one study, today’s 5-year-olds had the self-regulation capability of a 3-year-old in the 1940s; the critical factor seems to have been not discipline, but play. 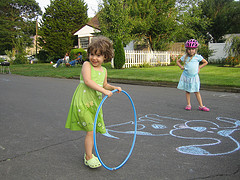 The benefits of play are great — more far-reaching than just helping kids blow off steam or get a little physical exercise. In addition to helping kids learn to self-regulate, studies show that child-led, unstructured play (with or without adults) promotes intellectual, physical, social, and emotional well-being. Unstructured play helps children learn how to work in groups, to share, to negotiate, to resolve conflicts, to regulate their emotions and behavior, and to speak-up for themselves.

“Neuroscientists, developmental biologists, psychologists, social scientists, and researchers from every point of the scientific compass now know that play is a profound biological process,” says Stuart Brown, a leading play researcher. Play “shapes the brain and makes animals smarter and more adaptable,” he says. It fosters empathy in kids, and lies at the very heart of creativity and innovation. And the ability to play has a profound effect on our happiness.

The good news is that while children do need time and space to “practice playing,” they know innately how to play. Grown-ups need to respect kids’ play as a built-in mechanism for becoming more socially intelligent, more creative—and happier. Here are three things to keep in mind when playing with your kids:

-Let kids lead. When we find ourselves saying things like “I like the game you are playing, but why don’t you let Sarah be the girl and you be the daddy?”, we are probably dominating too much. Don’t correct your kids when they are playing unless they are being unkind.

-Don’t play with your kids in ways that bore you. Spend time doing things that you enjoy (while still letting them lead). I love to rough-house with my children, but I don’t enjoy participating in their pretend play as much—so I mostly skip doing that part to avoid sending the message that they shouldn’t like it either. It is perfectly fine for parents to back-off a little and let children play on their own or with other children, especially once they are 4 or 5 years old. Kids learn to entertain themselves this way, and to get along with other children.

-Pretend play is particularly beneficial, so make sure kids have ample time for it. Projecting personalities and having make-believe interactions with stuffies, toys, or imaginary companions is a healthy way for kids to develop the skills they need to focus their attention and get along with other children. Dramatic pretend play with two or more children stimulates social and intellectual growth, which in turn affects the child’s success in school.

The more complex the imaginative play, the better. Make sure that kids have enough time: a half hour is the minimum. Play that lasts several hours is better. Encourage kids to use symbolic props rather than prefab toys – sticks for fairy wands and boxes for cars or houses. Older children can be encouraged to participate in drama classes and clubs. But remember: ballet camp isn’t the same as making up a dance with friends in the backyard.

Selected references:
Brown, Stuart, and Christopher Vaughan. “Play: How It Shapes the Brain, Opens the Imagination, and Invigorates the Soul”. New York: Avery, 2009.

Your blog is amazing.

I absolutely love this post! It reaffirms everything I have thought for the past 10 years! Great blog!

I’m printing this out and putting it in my school’s faculty lounge. I just spent 2 days telling parents that math homework (3 days a week) shouldn’t take more than 30 minutes, and science homework (1 day a week) shouldn’t be more than 10 – 20 minutes (Usually an observation or simple exploration kitchen science type activity).
Some wanted more and I explained their kids are going to do better at math if they do things like have them estimate the cost of 5 – 10 groceries, help them measure ingredients for a cake or to build something than if they spend an hour a day doing worksheets.

Great post, Christine. I was reading it and linked it to my travel blog post http://away-together.com/2009/12/18/play-around-rotorua/ b/c I have been thinking a lot about play, parenting & priorities during long-term travel. It took getting out of regular over-scheduled, stressed routines to rediscover the profound benefits of play for our school-age kids. I appreciate your tips on how to maintain play when we return to regular life!
——-