The other night, I did something that I am not proud of.

We have four teenagers, so dinnertime is never dull, but this particular evening it was full chaos. One of our kids had not eaten much. My husband, Mark, really wanted this particular kid to eat more, and so he offered a bribe/threat: You can’t go hang out with your friends until you finish everything on your plate. 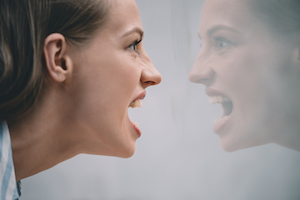 A power struggle unfolded, complete with sibling cheering sections. I tried to shut it all down using dramatic non-verbal cues. This was not what we agreed to do when a kid doesn’t eat well, I screamed silently with my supercharged glares.

I was not successful. The picky eater ate what was required in order to go hang out in the neighborhood.

Although I was obviously right (ha ha)—because bribing kids can work in the short run, but research clearly demonstrates that it backfires in the long run—this article is actually about what I did next, and why I did it.

The next night, I intended to calmly raise the issue so that we could prevent similar dinnertime spectacles in the future. I knew that I couldn’t make accusations or do anything that might make Mark defensive, because people don’t learn well when they are being criticized.

Let the record show that I fell well short of my own goals.

I opened with something like, “How could you have been so stupid?!”

And then I started to rant.

“Haven’t we talked about that situation a million times? We have a freaking PLAN for this!! We’ve AGREED what we will do about picky eating!! Why can’t you follow through with the plan? Why can’t you understand how important it is to be consistent?” He responded calmly. I rolled my eyes with contempt and superiority.

I was such an ass.

I do not know of any parent, myself included, who has not at some point threatened, bribed, or otherwise manipulated a child into doing what they wanted the kid to do. I actually do possess a huge capacity to empathize with my dear husband’s intentions and behavior, but it was a capacity I failed entirely to draw on.

Why? Why was this so emotional for me? Why was I so critical and punishing?

Because I was projecting.

We project, psychologically speaking, when we unconsciously and unknowingly attribute our judgments about ourselves to other people.

See, the thing that drives me most crazy about myself is that I often make big elaborate behavioral plans and then I don’t follow through on them. For example, I’ve recently stopped meditating (again) after making a plan to meditate more over the summer. The perfectionist in me has been a mess of guilt and anxiety over this, something I didn’t consciously realize until I found myself dressing Mark down for not following through on our picky eater protocol.

We humans have blind spots. It is often hard for us to see our own failings, but it can be very easy for us to see what’s wrong with other people. The people around us, particularly our spouses, are like mirrors. We see clearly what we don’t like, but we get it backwards.

Martha Beck cleverly calls this charming human propensity “You spot it, you got it.”

Psychological projection (in its many forms) is a defense mechanism first conceptualized by Sigmund Freud. His daughter, Anna Freud, later developed the theory. The Freuds posited that we often deal with the thoughts, motivations, desires, and feelings that are hard for us to accept in ourselves by attributing them to someone else.

Although many Freudian theories have not stood the test of time, projection is still considered a textbook human behavior. Indeed, I see projection at work all around me, in myself, in my friends and children, and in my clients.

That doesn’t mean that we are always projecting when we see other people’s flaws, or when we see the ways that others can learn and improve. But when we feel particularly emotional about a situation? When we feel hooked and irrational or harshly judgmental about someone else’s shortcomings, rather than empathetic or compassionate? We are probably projecting.

Projection is an undeniable human tendency, and I think it is pretty wonderful, actually, because it allows us to see ourselves more clearly, to better understand what is causing us anxiety and stress.

The greatest thing about projection, to me, is that it comes with a set of instructions for our own growth and happiness. We’ll usually do well to do whatever it is we wish other people would do (or stop doing).

In other words, when we notice that we are projecting, we have the opportunity to take our own advice.

For example, I wanted Mark to stop asking me to make parenting plans that he couldn’t follow through on. Instead, I wanted him to accept easier, good-enough, plans. So the opportunity for me (to take my own advice) was to stop forcing myself to follow-through on all my best-made plans.

In this instance, the solution is not to try to be more perfect. The solution that emerged from my projection is to stop making plans that aren’t realistic, given the lovely, messy world—of teenagers and a career that has me traversing time zones—that I live in.

For us and our picky eater, this means being less controlling about food. For me and my meditation, it means letting it go until school starts again.