While some marathon runners raise money for their favorite causes, Shemaiah Weekes asked his friends and followers to pledge random acts of kindness. When he finally crossed the finish line after 26.2 miles, his community had committed to perform more than 100 kind acts. 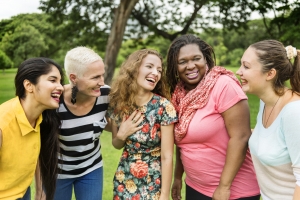 “I’m hoping this will spread a wave of kind acts which goes far beyond those who make direct pledges,” says Weekes.

He came up with the idea after taking the GGSC’s free online course, The Science of Happiness, which invites students to cultivate well-being skills like kindness, empathy, compassion, and mindfulness. And he’s not alone: Many other students have found that they can’t help but share their happiness journey with others.

That often starts with family. Last November, Isaac Leong designed a Thanksgiving tree poster with colored leaves listing the things his family was grateful for. He also made five gratitude letters shaped like hearts—and hand-delivered them (along with chocolate) to the people who had made his life better.

After learning about gratitude journaling in the course, Jolane Tomhave now texts her daughter almost every day with a list of things she’s grateful for—like crisp mountain air, her feet, or peanut butter. And her daughter does the same. “It is so much fun and we both feel good doing it,” she says.

But no one can feel good all the time, of course. The science of happiness teaches us how to boost the positivity in our life with practices like gratitude and awe, but it’s also useful when things get tough. A 62-year-old who took our course says that they learned to be mindful of all their emotions—not just the good ones—and to listen more empathically and offer better apologies in their relationships.

“I no longer avoid conflict,” the student says. “My relationships have become more honest and open.”

Another student had a similar experience. “I no longer worry about failing a relationship by experiencing confrontation and conflict,” she says. “At the same time, my confrontations have been less volatile and distressing simply because being self-compassionate and forgiving has made me less intent on swaying others to my viewpoint.”

At work, Olivier Marchesin was struggling with too much conflict. After watching his company become more and more corporate—prioritizing profits over people—he became unhappy, angry, and aggressive. That led to countless arguments with his colleagues.

But after working on a forgiveness practice, he found a way to drop the stress and anger while still holding on to his values and fighting to put people first. He started to feel more peaceful and reflective, which rubbed off on those he interacted with. “Many people in our head office told me they felt the change in me,” he says.

Student Shannon Corsi has realized she can help the people around her in an even more deliberate way. When someone she knows seemed depressed, she offered all the mood-boosting assistance she could think of: She gave her a hug and a compliment, showed her some funny videos, and cooked her a healthy breakfast—which seemed to change the whole course of the person’s day. “I know I can influence myself in this manner, as well,” she reflects.

Happiness is contagious, after all. When you help others, you often end up feeling better, too. And when you want other people to change, sometimes the best thing you can do is to change yourself.