It’s the most glorious sound—your two young children laughing and playing. You can just sit, in an entirely different room, uninterrupted, and revel in your otherworldly parenting skills. But then the dream ends. There’s a thud, a shout of “Mine!,” maybe a “Stop!”; you can’t be sure because it’s muffled by some crying. A child, most likely the younger, calls, “Daddy, help me!” 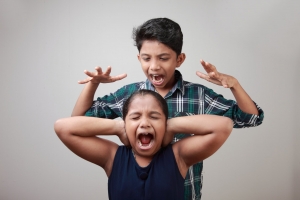 It’s a great goal, and a useful one, because conflict within families cannot and should not be eliminated. “The sibling relationship is where you learn how to fight,” says Corinna Tucker, professor of human development and family studies at the University of New Hampshire. Your kids will have to do it with friends, coworkers, and roommates. Their ability to productively handle conflict will set them up for success—and you can create the space for them to learn it.

The sibling relationship needs nurturing. It’s one of the longest that your kids will have in their lives, and the dynamic is consistent. If it’s positive early, it will most likely remain so; same goes if it’s negative. And siblings who were victimized by a sibling—who hit them, stole or broke their belongings, or called them names—are more likely to be victimized by their peers.

But the task of teaching young children to resolve their own arguments is not an easy one. Siblings are together all the time, probably more so than with you. They’re in regular competition for everything—food, toys, couch space, your attention. Even if they get along, a basic relationship tension comes from them wanting what they want when they want it, “otherwise known as egocentrism,” says Laura Kastner, family and child psychologist and author of Getting to Calm, The Early Years.

And they won’t always get along, no matter what you do. They’re sometimes tired, which compromises decision-making, and it’s easy for older siblings to offload onto younger ones. After a day at school, where peer pressure keeps kids from acting out, the restraint falls away at home, with a convenient target for pent-up frustration. “The sibling is the garbage can of the universe because you have to be nice to everyone else,” Kastner says.

When conflict inevitably occurs, young children aren’t naturally endowed with compromising skills. Their ability to regulate their feelings isn’t fully matured—they’re inclined to be physical when they’re upset—and it won’t be until they’re 25 years old, Kastner says. Translation: Adults can lose their composure. Teenagers going through puberty will lose it. So you can’t hold a six year old to a higher standard.

How to help kids problem-solve

With this kind of sibling dynamic, you’re going to need more than “you two work it out” to quiet the tears and yelling. Starting around age 4 or 5, you want to encourage mediation, where your kids end up coming up with and agreeing to a solution. Research suggests that when parents use a mediation approach, children are more constructive in handling conflicts and compromise more often.

Hildy Ross, coauthor of that study and a distinguished professor emerita of psychology at the University of Waterloo, lays out the fundamentals to be effective:

Discuss the process. Kids have to first understand whatever you lay out as ground rules. No interrupting. No insults. No shouting, for example. Your job is to guide—think: coach—but they decide the outcome. By soliciting agreement to the parameters upfront, you get a helpful tool. Whenever kids start name-calling or talking over one another, you can refer back by saying, “Is that one of the rules?”

They take turns. Each child has his say and gets to define the issue as he sees it. What may tumble out are differing beliefs about what the source of the problem is and when it actually started. You might find out that the knocked-down block tower and punch were provoked by a drawing being ripped up two minutes before. You’re seeing the respective timelines and also helping your kids to name the problem—you can’t fix what isn’t identified—and how it makes them feel.

Consider perspectives. After the kids have shared their versions of events, ask each one how it felt as the conflict was going on, then ask the other sibling, “Can you repeat what was said and how it made your brother or sister feel?” This builds up the ability to listen, hear another person’s account, and report accurately.

Laurie Kramer, professor of applied psychology at Northeastern University, adds that it’s helpful for parents to suspend disbelief and just listen when kids talk about how they see a problem. Sometimes, a parent’s frustration at what seems like irrationality—the battle is over a crayon because green is the color of the sky—can increase the tension. “The reason doesn’t have to make sense,” she says. It makes sense to your child, and as much as you want siblings to understand each other, part of the process is you as a parent understanding your children’s intentions.

“The sibling relationship is where you learn how to fight”

Come up with the solution. The above three steps encourage sharing, listening, and showing empathy, and they all work toward the ultimate goal of allowing your kids to offer up a remedy. When they do, you reality-check the suggestions—a camel ride may sound fun, but rarely is it feasible. As the parent, you can nudge them to dig deeper when necessary, but ultimately the kids own the result.

And whatever idea they come up with is just that—an idea. You’re working on problem solving, which requires creativity. When they make a proposal, ask them how they think it will work. Then have them try it out, see how it actually works, and, if needed, try something else. “It gets them into brainstorming mode, which opens them up to new possibilities,” says Kramer, who also did the research on the consistency of sibling relationships.

Have a backup plan. When best efforts fail—because they will—create a fallback, be it Rock–Paper–Scissors or flipping a coin. Your children have motivation to work something out, but if they aren’t able to, there’s a recognized last resort. It’s no-nonsense and fair, and still gives them control of the process, says Susan McHale, distinguished professor of human development and family studies at Penn State University.

The importance of patience

The end goal is for you to be hands-off, but one reality to accept is that this is not a quick process. At first, you need to be more directly involved and do more teaching. “Initially it’s intervention, then it’s prevention,” Tucker says.

You might have to suggest the obvious, such as sharing or taking turns, but your children always decide. It’s time- and energy-consuming, but the investment pays off. The siblings consider each other’s feelings, while the younger sibling is empowered and gets equal footing—without intervention, older ones tend to dominate. “It rebalances the relationship,” Ross says.

Since you don’t decide the outcome, no one feels like they won or lost or that you took a side, further shrinking possible resentment. And you aren’t casting judgment. There’s no good or bad, right or wrong. The battle becomes about something simpler: “It’s about different interests,” Ross says.

Mediation is an essential piece, but fundamentally you’re trying to encourage behavior that you want to see: being fair, controlling your temper, standing up for your sibling. You do that by catching your kids doing something positive and praising it, such as, “That was great how you spoke clearly when you were upset” or “You were such an amazing sport during the game.”

One of the easiest ways to notice good stuff is to play with them—which has other benefits, too. For one, it’s a practical move, since it would be unwise to leave a seven and four year old without any supervision for an extended period anyway. Beyond that, they get time with you, which is fun, and by seeing them interact, you can sense oncoming conflict and redirect it before it bubbles up, McHale says.

Your presence will encourage them to get along, but you also pick activities that everyone involved can do well with. No one is dominating; no one feels over-matched, reining in frustration. Everything is more enjoyable, most notably the feeling of being with your sibling, she says.

It doesn’t make battles disappear, of course. But along with creating a framework to talk and giving your children the skills to collaborate, the biggest advantage you’ve created is that they like each other more—and that removes obstacles before they appear. “There’s more tolerance,” McHale says. Siblings “are on each other’s side and going to give each other the benefit of the doubt.”