When I was little, I pretended to be Wonder Woman, my brother was Spiderman, and together we would save the world.

It's exhilarating to be seven-years-old and convinced of your awesome power to help people. I want my kids to feel the same rush that comes from seeing themselves as heroes. 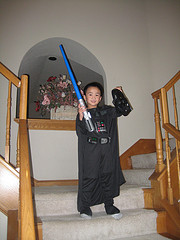 But I also want more for them: I want them to actually BE heroes themselves, in their real life. The schoolyard needs them.

According to the U.S. Department of Education, every single day 60,000 students avoid going to school because they are afraid they are going to be bullied. Even more shocking is that their fear might be justified: 25 percent of public schools report that bullying occurs among students on a daily or weekly basis.

How to Raise a Hero Rather Than a Bystander

BYSTANDERS stand by and watch while other kids are bullied. HEROES don't let bullying happen: they intervene, get help. They are out to save the world, one kid at a time.

Bystanders watch while evil takes root but are too frightened, or apathetic, to take a stand. All grown up, bystanders did nothing while US soldiers abused prisoners at Abu Ghraib. Bystanders are that silent majority that makes meanness somehow acceptable, even commonplace.

Heroes, on the other hand, have two key qualities, according to heroism researchers Philip Zimbardo and Zeno Franco. First, they live out their values and their beliefs. They defend TRUTH with a capital T. Second, they incur some personal risk to do so.

Most kids, and probably their parents, too, fear the consequences of standing up to a childhood bully. What if the bully turns his wrath on our child? Acting heroically might mean that our children stand a chance of social, emotional, and physical harm.

Assuming that the situation isn't out of Lord of the Flies (i.e., there are adults in charge somewhere, even if they are a bit asleep at the wheel), I would prefer my kids take those risks rather than become bystanders. Here's how we can make it more likely we raise heroes than bystanders:

I want my kids to be happy and safe, of course, but I also want them to be heroes. I don't think this is a delusion of grandeur; I think it's necessary, and the time is right to nurture a new generation of heroes.

Do your kids know what heroes are? Do you want your kids to act heroically, even if it involves some risk?

If you want to learn more about how to bring out the hero in your kids—and yourself—check out the Greater Good Science Center event, "Goodness, Evil, and Everyday Heroism," featuring a presentation by Philip Zimbardo. February 26th at the Jewish Community Center of San Francisco.

Zimbardo, Philip and Zeno Franco (2006), "The Banality of Heroism"
https://greatergood.berkeley.edu/greatergood/archive/2006fallwinter/francozimbardo.html.

Rigby, Ken and Johnson, Bruce. "Expressed readiness of Australian schoolchildren to act as bystanders of children who are being bullied." Education Psychology. Vol 26(3), June 2006, pp. 425-440.

I went to a presentation with my Girl Scouts once about how to stop bullying.  It was great and gave some specific examples of things kids could do to help the victims without becoming victims themselves.
The one thing I remember was that kids could use body language, not words to help a victim — when you see someone of lower status being verbally bullied on the playground, you can come stand next to the victim facing the aggressor, as if to say “If you say mean things to this person, you are saying them to me too.  Stop.  Think.”
I think giving kids stories of specific examples and specific tools they can use is helpful.

Excellent article. I wonder, however, if there is a danger of pressuring children into being leaders when they might not naturally be able to handle that kind of responsibility. Does being a hero create anxiety in them?

Thanks so much for this post! What an important topic. It’s essential for us to raise our children to be heroes; and, we, too need to be heroes ourselves by making choices that do the most good and least harm for all and that help to change destructive systems.
In addition to raising heroes who can handle conflict peacefully and intervene to help others, it’s essential that we nurture our children to be humane. “Humane” in the dictionary is defined as having what are considered the best qualities of humans: compassion, kindness, respect, generosity, persistence, and so on. If you’re a parent who’d like to gain more tools, knowledge, inspiration and support in raising a humane child, then I’d like to recommend two resources:
A book: Above All, Be Kind: Raising a Humane Child in Challenging Times by Zoe Weil
A month-long distance learning course for all parts: Raising a Humane Child (http://humaneeducation.org/sections/view/raising_a_humane_child)

The big concern that I think most parents would have about encouraging this kind of behavior is how do you prevent them from becoming victims of bullies themselves? Many heroes, like comic book superheroes like Superman, are basically invulnerable. I’d be nervous about encouraging my child to imitate this unrealistic model. In fact, I worry more that she will imitate this behavior more than she won’t.
One final thought: the idea of heroism is very romantic, and some lives were saved in WW2 by these courageous acts. But the truth is that they didn’t stop the holocaust, nor could they. They were brave people in a desperate situation doing what they could, and that should be commended, but as a model for how we should stop bullying, it falls short for me. Our kids having to shoulder the burden to stop bullying is because of our failure as a society to do something about it.

In response to Lena, Beth’s comment, above, is the answer to any parent’s reasonable fear that their own child might bring on the wrath of the bullies. Heroism in the schoolyard doesn’t REALLY require Wonder Woman and SpiderMan; it just takes willingness to be kind to a child whose social status is lower than your child’s.
It’s also great to be able to find something your child is already doing and recast it for him or her as heroism.
For example, when my very tall, muscular son was in middle school, his much smaller friends would walk through the crowded halls in his wake. It took me months to figure out that their focus was more safety than friendship, but once, when I picked up a few of them who had missed their bus, one particularly small boy — smart, funny, artistic, I’m sure his parents had no idea he was suffering at school — sat in my back seat and put his binder back together with some duct tape he found on the floor. After we had dropped him off, I asked my son if the other boy’s notebook had been torn in a fight. “No,” he said, “he just drops his stuff all the time.”
No, he wasn’t “dropping” stuff; he was having it stripped out of his arms by bigger, older kids. All it took to make his school year much, much better was for my son to become aware that the smaller friends walking near him were safer when my son made eye contact with the kids walking the other way. No threat, no contact, just an acknowledgment that they were with him.
I have more, similar stories — we started feeding him huge breakfasts and immense after-school snacks so he’d leave the lunch room faster (lunch is important when you’re growing an inch-plus per month)and discourage by his presence the bullying on the playground. Later, when he’d become accustomed to his size instead of embarrassed to be so tall, we were able to point out that his small actions had in fact been heroic . . . and now he looks for such opportunities. I’m not sure temperamentally that he’ll ever be one to break up a fight or rush into a burning building, but in his small corner of the world (high school), there’s a little less bullying, a few more girls whose boyfriends don’t call them names, a few kids on the edge socially who have a friend. That seems heroic to me.

Momof5, Thanks for posting, that story made me cry.
I think sharing stories, and sharing them with our kids is vitally important.
My 6th grade teacher, Mr. Cerutti, used to share stories about his life all the time (at least once a week).  To my academically-minded self, I was willing to listen but I felt like he was wasting time we could be spending learning.  Now that I’m an adult I don’t always remember the proper place to put the date on a friendly letter, but I do remember Mr. Cerutti telling us about how when he was at a party in college and choosing not to drink, what he said when someone pressured him to have a beer.  He said, “Because one day you’ll grow up and have kids, and I’ll grow up and have kids.  I’ll say to my kids, when you grow up, I want you to be like me.  And you’ll say to your kids, when you grow up, I want you to be like Timothy Cerutti.”
I’m not quick-witted, the type who comes up with good things to say in the moment, but I remembered that lesson.
He also told of other parties where he felt pressured to have a beer, so he’d take it, then go to the bathroom, dump it down the sink and fill it with water.  Then when anyone offered he could say, “I’ve already got one.”  That’s a lesson for the child even lower on the totem pole.
He taught lots of kids who grew up in a tough neighborhood.  I think those life-lessons of what do you say when you want to be the good person you know you are inside but you don’t know how were the most important lessons he taught us.
–Beth
——-