Conflict is part of life. And that means it’s part of our relationships, even with those we love most. I just don’t think there’s any way around this. Could the Dalai Lama avoid fighting with his spouse—not to mention his ex-spouse—while trying to raise children? I’d like to think so, but then again, perhaps there’s a reason that His Holiness isn’t married.

I’m constantly juggling the needs of my two opinionated kids, my ex-husband, and my romantic partner (who has to balance my needs with those of his own kids and ex-wife). Given all these potentially conflicting needs, I’ve found it helpful to know how to pick a fight without causing World War III. 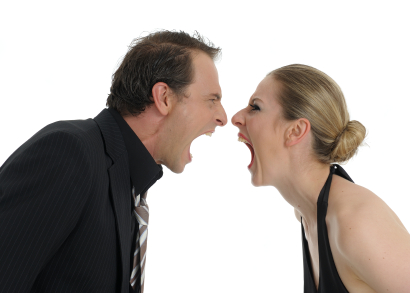 Above all, it’s important to take the right perspective. Sure, you could see a conflict as a competition, a fight for who’s right and who’s wrong. But that’s not gonna raise anyone’s happiness.

Here is the method I’ve devised, by studying John Gottman’s research, to initiate problem solving without actually starting a knock-down-drag-out. This is similar to an older post of mine, but my thinking (and practice) has evolved over the last few years.

There are three things to keep in mind when you are about to issue a complaint. (But first, a caveat: Whether you’re dealing with your spouse, your teen, or even your ex-spouse, an essential part of raising happy kids is to keep conflict low. That said, these techniques are relevant to conflicts with just about anyone.)

Say your partner has not been pulling his or her weight in the kitchen lately, and you are starting to feel frustrated and resentful every time you find yourself cleaning up the dinner dishes while he or she watches TV.

1) Start with an appreciation AND an “I statement”
How you begin is important. According to Gottman, in 96 percent of cases, the first three minutes of a conversation can determine the fate of it all—whether or not a massive fight erupts, constructive solutions are found, or whether apologies are issued and accepted.

Express gratitude, and then use that same “I statement” we ask kids to use (“I felt X when you did Y”). The key is not to strike a match, even if you are angry.

WHAT NOT TO SAY:
“You never help me in the kitchen anymore, ya lazy jerk.”

AN APPRECIATION + AN “I STATEMENT”:
“I appreciate how much time you are spending at work; I know you are putting in long hours for our family and I’m grateful for that. I want you to be able to relax at the end of the day. The problem is that I also want to relax; I felt angry and resentful tonight when you didn’t help me clean up the kitchen.”

2) Remain Calm. Or find a way to calm down.
Remember, you have a problem you need to solve. For that, you’ll need the more evolved part of your brain to be in good working order, which it won’t be if you are primed for a “fight or flight” response.

Physiologically, the adrenaline rush and physiological changes that occur when we are attacking or being attacked (emotionally, intellectually, or physically) make creative, sophisticated thought rather difficult. If you are feeling super emotional, angry, or defensive—or if you know on some level you’re being a little irrational—stop yourself and take a break.

DON’T: Go off into some corner to sulk or plot out your winning arguments. (I’ve been known to jot down key bullet points to make my argument air-tight. This is not a good way to reduce the adrenaline coursing through my veins.)

DO: Agree on a time to revisit the discussion later when you (and your partner) are feeling more calm. Then go for a walk or do something that will help you relax and feel more centered.

3) Accept Your Partner’s Influence
This is how you go from being a complainer to being a problem solver. The key here is not to counter everything your partner says, but instead to demonstrate empathy.

Your spouse (or ex-spouse, or whomever) is not your opponent; you are partners in solving a common problem. Remember your common goals—e.g., to live in a relatively clean household, to raise happy kids, to have a stable and fulfilling relationship. To solve your common problem, you’ll both need to make an effort to meet the other person’s needs. To do that, you’ll need to accept their influence.

DO: Agree on at least some points that the other person is making. Perhaps you agree that, yes, you are able to clean up the dinner dishes more quickly.

DON’T: Continue to pursue the issue after an apology has been made and solution proposed.

For example, if your spouse says, “I’m sorry, honey. You’re right, it isn’t fair that you’re doing all the work. I’m going to help you tomorrow,” one subtle way of accepting influence is simply to accept an apology: “Thank you for your apology. I’d really appreciate it if you could help tomorrow.”

I know this tip seems obvious, but when we are feeling emotional, a quick resolution can feel anti-climactic. Don’t stir the pot by reminding your spouse AGAIN how they haven’t been carrying their weight, or retorting, “Yah, well, you don’t seem that sorry.”

Remember, that while we might start by plotting to “pick a fight,” we need to end by coming up with solutions, working until we feel that there is a good-enough solution we are both willing to try. One line I find particularly effective for those recurring, cyclical conflicts: “Thanks for your apology. What solutions can we think of together so that this doesn’t happen so often?”

What fight have you recently found yourself starting? How will you approach the problem in the future?