It’s a scene played out every day in nearly every home around the world. You’re on the phone. Your child doesn’t just want to talk to you, he needs to talk to you. You say, “Please wait.” He hears, “Please keep talking,” and so he does. 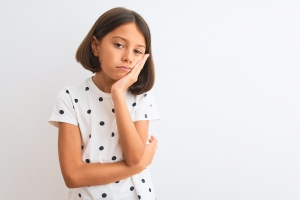 All you want is for your four, six, or eight year old to be a little more patient. It could be for the conversation you’re trying to have on the phone, or it could be for the playground slide or the doctor’s appointment.

It’s a good thing to want. The ability to wait is about self-control and delayed gratification, both ultimate real-world skills, because “there will not be people entertaining you 24/7” in life, says Jill Trumbell, an assistant professor of human development and family studies at the University of New Hampshire. Research suggests that kids who grow up into patient adults not only have better health and mental health, but they also have stronger relationship skills and make more progress toward their goals.

It sounds like a simple request—“Just hold on”—but it’s not. Young children’s brains are still developing. They want to know that you’re there for them. And you’re asking them to wait, a favorite pastime of no one. But, even with a three year old, you can help them to be patient. It just requires you to be clear, explain it in a way that they can understand, and be patient yourself, because—like many skills—it needs constant nurturing and it will evolve naturally as children grow.

Why patience can and can’t happen

Pamela Cole, a professor of psychology at Penn State University, has researched how children show patience (or not) at different ages. Waiting eight minutes to open a gift, 18 and 24 month olds were quick to react angrily and slower to shift their attention away from the brightly wrapped box. Not knowing what was inside added to the desire for it and the frustration of waiting to be able to open it. At three years old, kids were able to focus on other things for a while before getting angry, and their anger was more short-lived. Four year olds bid for their mother’s attention just as much as the 18 month olds did—the difference is that they made a quick bid and then turned their attention to something else. Overall, kids became less angry and show greater self-regulation as they got older.

Young kids, to some extent at least, are able to wait. Cristina Atance is a professor of psychology at the University of Ottawa who focuses her research on three to five year olds. In studies that she has collaborated on, she looked at whether kids would wait with no anticipation of a reward—rather than waiting for candy, videos, or (famously) a marshmallow. This is patience as a virtue, not just delaying gratification. The research showed that it was possible and that kids used coping strategies such as singing to themselves, bouncing around, or just staying still.

Atance says three year olds have a budding concept of the future—not necessarily in hours or even minutes, but they can understand that not everything happens immediately. But, as with all human behavior, it’s about context. Atance says that being in a laboratory experiment can make kids more compliant, and (in her studies) they showed more patience when a researcher was present, much like when a teacher is in the room. With rewards, they wait if they’re interested in what’s being offered. And there are the factors of being tired or hungry, which affect how much anyone is willing to wait.

Besides these factors, the main question of “Why is waiting so hard for kids?” has a few more fundamental answers. One is that their lives have been about you being there for them, and—with a seemingly benign phone call, a book that you began reading, or a conversation between parents—you’re suddenly not. “It’s not a threat, but it’s unsettling,” Cole says. “It’s not conscious, but they’re always motivated to maintain the connection.”

Part of it is how their brains work. Humans have executive functioning skills—working memory, inhibition control, and cognitive flexibility—that all combine to help us solve problems and regulate our attention, explains Philip Zelazo, a professor of child development at the University of Minnesota. They appear early—a six month old can search for a hidden object—but they continue to develop up to around age 25. So while a seven, eight, or nine year old certainly can be patient, “You’re working with immature skills,” he says.

And then there’s how they see the world. At age five, children are only starting to develop the ability to consider another person’s perspective—theirs rules. “If they love something, you should too. If they hate something, you should too,” says Pamela Davis-Kean, a professor of psychology at the University of Michigan. “Kids are very self-centered. That’s developmentally appropriate.”

That begins changing around five when they start kindergarten. Then, at around eight, they’ll start to criticize and self-criticize, no longer seeing themselves as good at everything. The upside of this is that they’ll take into account other people even more. Coupled with their growing ability to self-regulate and the expectations that they face in the classroom, “They’ll stop when they’re asked to stop,” Davis-Kean says.

But with pre-kindergarten-aged kids, it’s a little trickier. They don’t have a full sense of language; “Give me one second” is ineffectively vague, along with being a huge understatement. They can count to one second, so when you haven’t finished whatever you’re doing by then, they’re frustrated—much like an adult would be when a spouse promises to “be right down” and isn’t, says Jeffrey Bernstein, a child and family psychologist and author of 10 Days to a Less Defiant Child.

Given all these considerations, the next question is: What can you do to help them be more patient? Zelazo likens it to the gym. “You can go and get in shape, but it doesn’t last forever. The brain is continually reshaping itself based on what it does.” In other words, it’s a skill that has to be practiced and reinforced.

With kids under four, you want to be concrete. Make it sound like a rule: You don’t talk when I’m on the phone. You need to do something else when we’re talking. “They’re very black and white about things,” Davis-Kean says.

With kids around four, it helps to couple whatever you say with a distraction. They need another focus: Tell them that for the next five minutes, they can build a tower, do a puzzle, color, read a book. Set a timer—they understand a signal—and when it goes off, they can check in with you, Trumbell suggests.

At five, they can understand and would benefit from an explanation, not just a rule: “We need to talk so you need to do something else.” At this point in their lives, they’re already in school and understand the reasoning behind other expected behaviors, like “quiet in the halls since people are concentrating.”

On top of that, ask them to embody their favorite superhero. Rachel White is an assistant professor of psychology at Hamilton College, and in her research she did just that. Four to six year old kids pretended to be Batman, Rapunzel, Bob the Builder, or Dora the Explorer while doing a difficult task. Her research suggested that when kids assume a character, they are able to think more flexibly and persevere longer. “In pretending, they can be anything, do anything that they want, and it gives them a lot of freedom in the choices that they’re making,” she says.

In the case of patience, playing a role might give children distance from the boredom of waiting. They’re also taking on a persona and the characteristics of someone who’s more competent than they are. Again, suggesting any one of many superheroes might be effective, since (as kids told White) “Batman would never get frustrated.”

When the waiting looks more like being in a line or in traffic, in the moment, talk about the reality of having to wait, and then ask for ideas on how to pass the time. Then, reality-check them and talk about what’s acceptable—because as great as a flying car would be, it’s not practical, but naming things that are green is. You’re laying the groundwork for patience, but the conversation itself is a distraction, and in a way it keeps you calm, which models the behavior. “You’re giving them tools in their toolkit,” says Kimberly Cuevas, an associate professor of psychological sciences at the University of Connecticut.

Zelazo offers two exercises to do when tension is low to help kids prepare for those high-frustration moments. First, ring a bell that produces a sustaining tone, like one that has a clapper. Ask your children to raise their hands when the sound fades. That’s waiting. Then ring a little harder to extend the sustain-and-wait by one second over time. The other game is to put a stuffed animal on their stomachs and have them rock it to sleep with their breaths. Start with 30 seconds of quiet breathing, successively increasing by one second, as well.

With both, label the behavior as patience to make the connection. “In the future, the circuitry will be more readily engaged and work more efficiently,” he says. And since you’ve named it, you have something to refer back to. Rather than telling a child, “Be patient,” it works even better to say, “Remember how you were patient waiting for Teddy to fall asleep? I need you to do that.”

It’s a more implicit approach, also called priming, where suggestions are subtly given. According to Zelazo’s research, children are more influenced by hearing stories where characters hold the attitudes you want them to emulate than by receiving explicit instructions. One thing that helps make implicit priming more effective is that it’s less taxing. Explicit instructions require conscious control, and, at younger ages, the relevant part of the brain is still developing, says Zelazo.

When kids are successful at waiting patiently, praise with specifics. “Good job is an empty compliment. They don’t know what ‘Good job’ is for,” Trumbell says. The better words are, “I know that was difficult and I appreciate you giving me that time and being patient.” “You’re making deposits in their emotional bank account. It’s better than pounding on them with consequences,” Bernstein says. It’s also making the behavior more likely to be repeated. As Zelazo says, “It’ll help them think of themselves as someone who’s patient and can acquire more patience.”