Society has become safer over the past century. In the United States, the chance of death by preventable injury dropped by about half from the 1920s to the 1990s. However, our progress has plateaued for the past couple of decades, which is an obstacle to well-being. How can we do better?

While common safety tips (e.g., “Don’t run with scissors”), laws (“Click it or ticket” seatbelt enforcement), and even safety design features (child-proof pill bottle lids) have helped, “The next safety revolution is going to have to happen in our own minds,” writes Steve Casner, a research psychologist at NASA, in his book Careful: A User’s Guide to Our Injury-Prone Minds.

Casner’s book guides us through common mental pitfalls that put us in harm’s way and presents practical solutions for preventing injury—whether it’s indoors or outdoors, at a doctor’s appointment, watching kids, or simply growing older.

How our brains put us in danger 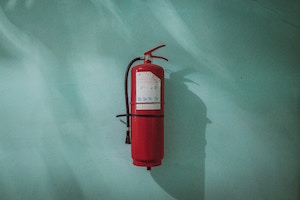 According to Casner, many of our mental habits—some deliberate, some less so—can compromise our safety and the safety of others.

We are worse at paying attention than we think we are. To get things done faster, we’re often tempted to multitask. But research suggests it doesn’t work: For example, multitasking while driving—say, looking down at your phone to change the music—translates to slower reaction times. This is because multitasking is essentially switching your attention quickly between two things. In fact, it can take drivers up to 27 seconds to fully recover from an attention shift. Paying attention to one thing is already difficult enough because of our wandering minds and limited mental energy.

We are prone to making errors, even when we have mastered a skill. We also have a tough time admitting that we make errors, which can leave us ill-prepared when they do happen. For example, neglecting to double-check your medication dosage could lead to unpleasant consequences.

We take risks—sometimes by choice, sometimes because we underestimate or don’t understand the risks involved. We tend to feel invincible to the consequences of taking risks and are influenced by seeing others take the same risks. Some people are more accepting of risk in certain situations, including men, adolescents, and people with a “sensation seeking” personality.

We don’t think ahead enough. Most of us don’t go about our days preparing for the worst to happen; we tend not to be “worst case scenario” thinkers. [Here’s a quick exercise: What’s the best emergency exit route where you are now?] We also may not have the experience to recognize impending trouble in different situations.

Our concern for others can be compromised. The more bystanders present in a situation where someone needs help, the less likely each person is to feel responsible to act. We may decline to intervene and prioritize our own needs if we’re under stress, in a hurry, or simply not in the mood. Casner cites the tragic murder of a woman in New York in the 1960s, when 38 people witnessed her attack but none intervened or called the police.

We are bad at taking advice. Even when face-to-face with helpful tips, we may fail to follow them if we’re confident in our abilities, if we didn’t ask for them, or if we’re (again) not in the mood.

How to keep yourself safer 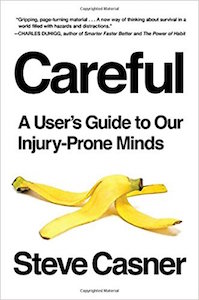 Casner presents ways to combat these mental traps and make ourselves more safety-prone. The first step is simply to be aware of them, which can then open us up to following his other suggestions:

Where public service announcements, law enforcement, and technology fall short, we can all be empowered to help ourselves and each other make lasting changes in being safer. Casner’s book may seem like an information overload upon first read, but his tips and examples are humbling and hopefully make us think twice.