For 10 years, video game designer Matt Harding has been traveling the world and dancing in front of a camera. From South Africa to North Korea, he finds strangers to teach him new routines, then records himself while he busts a move.

Harding clearly has what positive psychology researchers call “zest,” which means approaching life enthusiastically, as an adventure. If dancing in 71 countries isn’t an adventure, I don’t know what is.

Zest is among the 24 character strengths that positive psychologists have defined and studied as keys to living a happy and fulfilling life. Although the science of zest is still young, researchers are beginning to uncover evidence of how beneficial this intangible trait is. Below are four of those benefits, followed by some suggestions for how to increase your own zest.

1. Zest and happiness go together 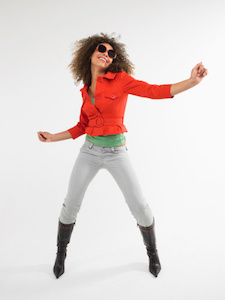 Zest is practically a happy trait by definition. “We describe people with this strength as vigorous and energetic, bright-eyed and bushy-tailed, bouncy and perky, peppy and high on life,” write Christopher Peterson and Martin Seligman in the book Character Strengths and Virtues: A Handbook and Classification.

Unsurprisingly, then, people high in zest tend to be more satisfied with their lives. In a 2004 study of over 5,000 adults, mainly women from the United States, people who had more zest were more satisfied with life—particularly when zest was one of their top character strengths. Meanwhile, those low in zest had remarkably low life satisfaction.

Zest isn’t just linked to an excessively joyful, Tigger-type of happiness; it’s associated with several different forms. A 2007 study of nearly 13,000 American and Swiss adults looked at three different ways to be happy: a life of pleasure, a life of engagement, and a life of meaning. Zest was linked to all three routes to happiness—particularly the life of engagement, which involves being fully absorbed in life’s activities (in “flow”) on a regular basis.

2. Zestful people are happier at work

On the job, zestful people turn their enthusiasm and energy to the work itself. They are the committed, engaged workers for whom employers search high and low.

In a 2009 study of nearly 10,000 adults, people with more zest were more likely to be satisfied with work and see their work as a “calling”—meaning that instead of striving for money or promotions, they are motivated by the enjoyment and meaning they get out of work. Seeing work as a calling, in turn, has its own benefits, such as taking fewer sick days and experiencing less stress.

The study looked at employees in professional, managerial, administrative, and blue-collar roles, as well as stay-at-home parents, and zest wasn’t equal among all of them: Professionals tended to be the most zestful, while clerical workers were the least. Jobs that drain energy may sap our zest, too.

3. Kids with zest are less neurotic

You might think that kids—with their exuberance and energy—are naturally zestful, and you would be right.

A 2006 study of middle schoolers found that zest is more common among youth than adults. In turn, more zestful kids had fewer “internalizing” problems such as anxiety, depression, social withdrawal, and feelings of inferiority. Zestful students also tended to be less neurotic, a personality trait characterized by negative emotions and sensitivity to stress.

Younger kids reap benefits from zest, too. In another 2006 study, parents wrote roughly 200 words describing their three- to nine-year-old children. Researchers then rated the kids’ levels of zest based on these descriptions, looking for phrases like “full of life,” “energetic,” and “enthusiastic,” as well as their levels of happiness. They found that children who were more zestful also tended to be happier.

4. Zestful teachers are better at their jobs

My favorite teacher in high school was Mr. Van Genderen, who taught freshman biology. He started every class by reading from a tabloid, picking biology-related stories about aliens and mutant creatures. He’s smiling in every memory I have of him, and his enthusiasm was infectious. I didn’t even like biology, but he inspired me to volunteer for hours of extra studying and test-taking on the biology team.

Mr. Van Genderen had a lot of zest, and it turns out zest might be key to a successful teacher. In one study mentioned in this 2009 review, researchers looked for similarities among teachers whose students were performing the best, measured by improvements in their standardized test scores. The most effective teachers tended to exhibit a combination of social intelligence, humor, and zest.

How to cultivate zest

Could you use some extra zest in life? If you want to feel more alive, try these science-backed suggestions for increasing zest.

It might not be your goal to travel the world and dance with strangers; maybe your enthusiasm runs more toward teaching, acting, or parenting. But whatever it is you want to do, cultivating zest can be an effective way to help you get there (and enjoy the journey, too).

For more on zest, check out this video from Louie Schwartzberg and Moving Art, featuring Jason Silva—part of Moving Art’s Gratitude Revealed series, on which the GGSC served as a partner.