A decade’s worth of research on forgiveness has pointed to the same conclusion: Forgiveness is not only good for you, it’s good for your relationships, too. Several recent studies have offered new evidence to back this up—with one important caveat for the role of forgiveness in marriage.

In one study, psychologists at the University of Miami asked 165 college students to consider someone who had wronged them within the past seven days—whether it was a friend who had insulted them or a boyfriend or girlfriend who had been unfaithful—and rate how close they felt to that person before and after the transgression. Then, every day for the next three weeks, the participants rated how much they forgave their offender and how happy they felt in general.

The results, published in the Personality and Social Psychology Bulletin earlier this year, suggest that forgiving made people feel better: Forgiveness on one day was related to greater happiness on the next. The researchers found that the effects of forgiveness seemed to go in the other direction, too: It was easier for participants to forgive when they were already feeling happy on a given day. People were also more likely to feel happy after forgiving someone who was close to them, especially when that person apologized and made amends for their transgression. The authors argue that forgiveness boosts happiness because it repairs people’s relationships with friends and loved ones; previous research has shown that these close relationships are vital to long-term happiness. 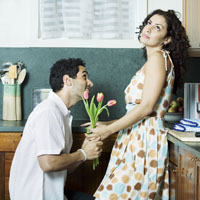 But other research, conducted by psychologist James McNulty at the University of Tennessee, suggests that forgiveness isn’t always the best choice for married spouses. McNulty studied 72 newlywed couples over two years, following up with them every six months. He found that, in general, spouses who were more likely to forgive each other had stronger, more satisfying relationships; those who were less forgiving had less happy marriages.

But the opposite was true if a husband or wife frequently mistreated his or her spouse, such as by insulting, swearing at, or refusing to talk to him or her. When they were the objects of such abuse, more forgiving spouses became less satisfied with their marriages.

To explain this result, McNulty argues that if a spouse continues to forgive a chronically misbehaving husband or wife, that bad behavior will probably continue, or get worse.

“Partners of very forgiving spouses know that those spouses are very forgiving and may feel they can get away with their negative behaviors without repercussions,” he says.

“If that is the case, making sure partners know they are accountable for their negative behaviors should prevent those behaviors from getting out of control.”