Our Science of Happiness course boosted happiness levels in students from all over the world. But did the homework we assigned—11 different happiness exercises drawn from published research studies—have anything to do with that result?

We encouraged students to try one or two happiness practices each week for 10 weeks. If they had, we asked how “impactful” they found that practice to be.

Curiously, students rated all the practices, from random acts of kindness in week three to writing about awe in week 10, at a similarly high level (almost five on a one-to-seven scale). But did students like all of the practices the same? To explore this, we asked them to rate the “fit” of each one—and here differences emerged. Judging fit involves rating how natural, enjoyable, and aligned with their values each practice was, as well as how much doing it was driven by guilt or meeting a social expectation. 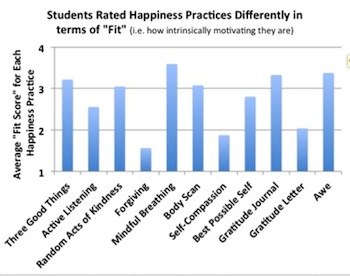 The results? Fit scores were highest for self-reflective practices like mindful breathing and body scan meditation, as well as those that entailed remembering positive experiences, like three good things that happened that day or keeping a gratitude journal. Which practices tended to have low scores? Those connected to difficult experiences, like forgiving someone who has wronged you or extending compassion towards yourself when you’ve messed up. Students might have thought that these practices would require more strenuous emotional effort, or just feel obligatory.

Overall, however, we found that people would benefit from a practice even if they didn’t think it would be a good fit.

The influence of gender

Did the age or sex of the student influence the impact or fit of the practices?

We didn’t find that they discriminated by age; people from ages 20 to 60 rated of impact at very similar levels.. 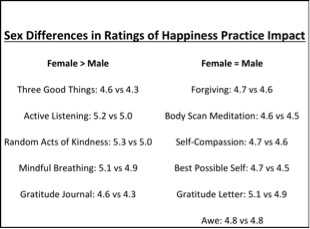 These observations are consistent with a larger, general issue in the Science of Happiness: female students outnumbered men three to one, yet the average man, if he did his homework, seemed to have nearly the same potential to benefit from the course.

Is the Science of Happiness just more appealing to women, and if so, why? Is there something we can do to connect and align with the interests and motivations of male students? These gendered questions are ones we—and the field—need to explore.

Relationships mattered as well. Single people reported the lowest fit with the happiness practices, and they were less likely to do them than co-habitating or married students. “My husband and I did the gratitude journal together sometimes and I felt closer to him,” wrote one student. “I think active listening also helped the relationship.”

In short, our data suggest that the happiness practices played a substantial role in the experience of The Science of Happiness course—and that such practices might help anyone to become happier. But the data also tell us that not everyone took equal advantage of the course: men and single people especially seemed to see the practices as not fitting into their lives. And relatedly, they were less likely to try them or experience their positive impact. As we continue to refine the course, we’ll be exploring ways to make the happiness practices more universally compelling, convenient, engaging, and effective for all students.