"He's totally conflict avoidant, so it isn't like we ever fight about this stuff," my friend recently told me about how she and her hubby address their differences. She seemed proud that the fighting in her household registers low on the Richter scale. Meaning: conflict is bad. Glad we don't have it.

It's true—conflict can be very uncomfortable. Whenever what we want seems at odds with someone else's desires, we have conflict. In preschoolers and among siblings, conflict is most often about contested toys or space. My 7-year-old is super-obsessed with rules and regulations and fairness, so conflict for her comes when people aren't following the rules to her satisfaction. My best friend has read about a hundred books on teasing and bullying, because that is the type of conflict her sixth-grader has been dealing with since the third grade. And no matter our age, most of us have been known to argue about contested opinions and beliefs. 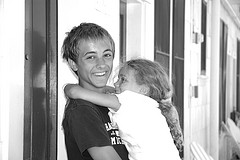 But because conflict fuels change, it is also what makes life interesting. Think about what a snoozer a movie would be without conflict! Conflict is entirely necessary for intellectual, emotional, and even moral growth. Good thing, because even if we'd do anything to avoid it, conflict will always exist. Conflict between children is like the air they breathe: research shows that playing kids experience about one conflict every three minutes.

As I mentioned in last week's posting, if we want our children to lead happy and meaningful lives, they are going to need lots of positive relationships. And if we want them to be able to foster strong friendships, the best thing we can do is to teach them learn how to deal with conflict by doing more than avoiding it.

We may avoid conflict between adults, but most of us parents and teachers are constantly addressing it with kids. Kids don't know how to settle disputes constructively until we teach them. One exhaustive study showed that left to their own devices, 90% of conflicts between elementary school children go unresolved or end destructively. Most kids shun conflict or try to crush their opposition; more than 60% rely on adults to resolve their conflicts. After reading a dozen or so studies about conflict resolution, I have found that my own cutie-pies regularly model three unhealthy ways to deal with conflict:

There are two main ways that we adults intervene when our kids start to fight. The first is what I'll call the "just stop it" method: we tell them what to do ("give that back and say you're sorry"), physically separate them, or take the object in dispute away. We are judges and umpires, generating solutions and commandments without much help from the bickering masses.

Necessary though all this often is, the "just stop it" method does not teach constructive conflict resolution, nor does it teach kids to learn to resolve their conflicts themselves. Effective conflict resolution requires empathy: the kids have to be able to take into account their friends' points of view, making it a natural opportunity for children to learn to consider other people's feelings.

So the other way that we can intervene is to act as a mediator or coach rather than dictator. Instead of stopping the conflict or imposing solutions, we can help kids see other people's perspectives, and we can encourage them to generate their own solutions. In addition to helping our kids foster strong friendships (and therefore lead happier lives), research shows that learning positive conflict resolution brings loads of benefits to kids, boosting their academic performance and increasing their self-confidence and self-esteem. It has also been linked to increased achievement, higher-level reasoning, and creative problem solving. Learning how to resolve conflict with siblings and peers helps kids cope with other kinds of stress, making them better adjusted and more resilient as teenagers—and more successful as adults.

So the next posting will be Conflict Resolution 101: how and what to teach your kids so that they can resolve their own conflicts positively.

How can adults mediate for kids so that they might learn these skills as adults themselves? Seriously, this is one of my greatest struggles. Looking forward to the next post!

glad to know this blog. I learned something valuable. thanks.

I searched for the next post in this article — Conflict Resolution 101 — but nothing showed up.  Was there a follow-up post?

I wonder if there are any classes for kids that talk explicitly about conflict resolution.  My 6yr old son is incredibly sensitive to conflict – so much so that he runs out of a room with his hands over his ears during DragonTales when someone might get in trouble (there are very few shows he will sit through without the MUTE button being hit).  We have very little conflict in our household in terms of arguements, and my husband and I are both pretty uconfrontational.  How can I teach these skills to my son, especially when I don’t seem to have opportunities to model them for him?
——-